Older recruits and fat bonuses: A Pentagon task force wants a complete overhaul of the infantry

The task force's future was uncertain under Patrick Shanahan, but looks to have a more secure future under Mark Esper. 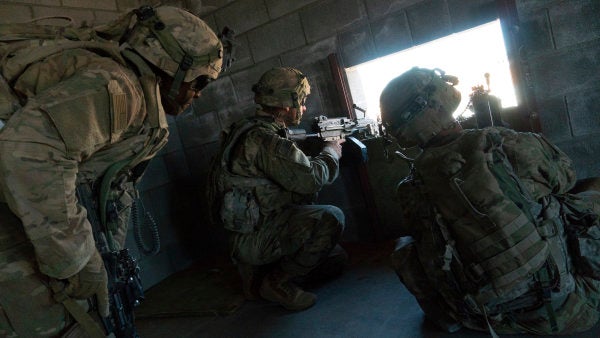 What would it take to transform U.S. infantry into a higher-caliber force modeled after the elite 75th Ranger Regiment? For starters, find recruits in their mid-20s and offer them $250,000 bonuses and a $60,000-a-year salary.

That's part of a working concept officials from the Pentagon's Close Combat Lethality Task Force (CCLTF) have been turning over for the past year in efforts to take Army and Marine infantry to a higher level of lethality.

The task force is the legacy of former Secretary of Defense Jim Mattis, a retired Marine Corps general and infantryman, who set out to place a new priority on a group that bears one of the heaviest burdens of warfare: the grunts.

Since its 2018 launch, the CCLTF has helped to find money in the Defense Department's budget to accelerate high-tech programs, such as smart augmented reality goggles for soldiers.

But despite its Defense Department backing, the organization faces a tough fight to convince the U.S. military's largest ground force to change the way it does business. Part of the task force's plan hinges on the Army's ability to revamp the antiquated methods it uses to recruit, select and train infantry and other select specialties with key roles in close combat.

“There is truth in this fact that we have not paid great attention to this idea of specially selecting people and incentivizing infantrymen and giving them the right skills,” retired Army Lt. Gen. Thomas Spoehr, who serves as director of The Heritage Foundation's Center for National Defense, told Military.com. “I think we can do a lot better in the Army … about getting the right people into these positions.”

But Chris Dougherty, a senior fellow at the Center for a New American Security, said that such an effort — while laudable — would be enormously expensive and unlikely to gain traction at a time when the Army is attempting to modernize its major combat systems and straining to meet recruiting goals.

“The question that I think the Army has got to grapple with is … is this a cost-effective use of Army dollars,” said Dougherty, who served in the 75th Ranger Regiment in the late 1990s.

“I don't think that we are headed into a period where … you are likely to see heavy investment in light infantry.”

Army Maj. Gen. Robert Scales, a key adviser to the CCLTF, has some strong words for critics of the overhaul effort, however.

He called them “professional personnelists, those who practice the black arts of human-resource, personnel management.”

“They approach it from the standpoint of efficiency and management,” Scales said.

Soon after the task force was first created, it became clear that supporting new, high-tech weapons and equipment would not be enough to truly increase lethality and performance in infantry units, Scales said.

“Just a few months into it, all of us came to the realization that, you know, the toughest nut to crack is policy, and the culture of neglect that close combat forces have endured literally since the inception of the Army 244 years ago,” Scales said. “The problem is, when you get into the Army's sausage-making machine, the frictions begin to arise, and everybody comes up with a whole series of what-abouts and what-ifs.”

“But we always slap back to that machine-age World War II era model,” he said. “Our system of training most of the Army, except for infantry OSUT, is no different than it was when we built an eight-million-man Army in 1942 and 1943.”

While the plan is still in its infancy, Scales said the task force is considering recommending that infantrymen should not be recruited until age 26, so they have more life experience.

Part of the criteria for infantry would “propensity to do well in infantry-specific skills,” as evaluated on a special test, Scales said.

Recruits would be brought in at the grade of E-4 or E-5 and could possibly be allowed to retire at half-pay after serving 13 years, “if you spent nine of those 13 years climbing up and down the mountains of Afghanistan,” Scales said.

Military experts say that recruiting higher-quality soldiers, specifically for the infantry, will be extremely challenging “in an Army that is already having problems meeting its recruiting targets,” Dougherty said.

The Army launched a bold new recruiting strategy last year after it missed its 2018 recruiting goal by 6,500 soldiers.

Maj. Gen. Frank Muth, the commander of U.S. Army Recruiting Command, told Military.com it's all about the numbers.

“From my perspective as a recruiter, it depends on the numbers you are looking for, and that is why the Ranger Regiment does so well. Because they are not looking for large numbers,” Muth said.

The task force is looking at effecting transformation for a much bigger population: 44,000 infantry and close-combat personnel in the active Army, Marine Corps and Special Operations Command, Scales said.

“We might want to say that those that habitually accompany close-combat units might be included as well, and that would include teams, medics and sappers,” Scales said.

Muth said such an undertaking “may be hard” because it could require the Army to alter the Occupational Physical Assessment Test (OPAT), a four-event test that helps recruiters predict whether recruits are suited for infantry and other physically challenging jobs.

The OPAT has three performance levels, with “black” being the highest for the most physically demanding jobs.

“They would be creating a separate OPAT beyond black, and make it black-plus,” Muth said. And say 'look dude, you are going to be able to deadlift 400 pounds.' … You automatically are going to start weeding people out … that may be tough.”

Spoehr said that for this infantry overhaul to work, the Army would have to use a different way of allocating people once they have decided to enter service. Recruits who meet the right criteria could be offered incentives to consider the infantry over other desired specialties, Spoehr said.

“I don't think this is going to create increased recruiting if they change the policies,” Spoehr said. “It will be like, 'hey, infantry gets first dibs on this … even though the person has always wanted to be an aircraft repairman. If the infantry wants him or her, then they are going to get that person.”

The CCLFT's vision for the infantry is to model the force after the Ranger Regiment so all grunts can receive more focused, intense training to hone their close combat skills

Scales said that infantry units should be “exempt from all the boring, routine, non-MOS specific tasks” to free up more time for marksmanship and other close-quarter battle skills.

Dougherty challenged this idea, arguing that it would mean a large increase in personnel costs to take over post-support functions and other details, all as the Army is cutting existing programs to find money to fund its six modernization priorities. Those priorities include long-range precision fires, the next-generation combat vehicle, future vertical lift, a mobile tactical network, air and missile defense and soldier lethality.

Army Rangers, pictured here on maneuvers, may soon have women among their combat ranks. A new directive has opened all Army positions to female soldiers. (US Army photo)

Ryan McCarthy, acting secretary of the Army, told Military.com recently that he has heard CCLTF Director Joe L'Etoile discuss the task force's concept for the infantry in the past, but a formal proposal has not made it up the Army's senior leadership.

“I do recall Joe talking about that, but I haven't seen any specific initiatives,” McCarthy said, adding that the CCLTF and the Army's soldier lethality cross functional team have been working very closely together on programs such as the smart combat goggles for soldiers, the Integrated Visual Augmentation System, or IVAS.

McCarthy and other Army senior leaders are banking on IVAS to help improve training for soldiers.

McCarthy and incoming Army Chief of Staff Gen. James McConville recently got a chance to try out an early prototype of IVAS, a Microsoft-based system designed to project a soldier's weapon sight reticle into a pair of high-tech glasses. The system can also be used to run synthetic training scenarios, so a soldier can go through a room-clearing exercise and engage enemy fighters, much like a first-person shooter video game.

“You can get hundreds and hundreds of repetitions … in your headsets,” McCarthy said. “In particular with room-clearing, so much of it is your marksmanship in close quarters and that repetition of flowing through a room with your team members.”

After running through synthetic training, leaders can use the data compiled on IVAS to see how soldiers performed on marksmanship and other tactical tasks.

“So, you can do an right there, and they can show you how you flowed through the room, how you performed,” said McCarthy, who deployed to Afghanistan during Operation Enduring Freedom with the Ranger Regiment while he served in the Army from 1997 to 2002.

“You can get real-time feedback on your performance, so you don't make the same mistake again.”

IVAS is scheduled to come out of early prototype development in 2020, but it's still unclear when it will be fielded to soldiers.

The CCLFT's infantry force of the future may still face uncertainty, but the recent leadership change at the Pentagon likely means that the organization will be around for a while, Spoehr said. Former Secretary of the Army Mark Esper took over as acting Pentagon chief at the end of June after Patrick Shanahan stepped down from the post.

“I think the stock price on the Close-Combat Lethality Task Force probably has gone up in the last two weeks. Because, I think, it faced an uncertain future under Shanahan,” Spoehr said.

“Now that we have Mark Esper, a former rifle company commander, there is a chance that will continue to receive the same priority that Mattis was giving it.”

SEE ALSO: If the United States really wants to win against China or Russia, it needs to start investing in the infantry