U.S. Sen. Jim Inhofe purchased — and quickly sold — tens of thousands of dollars worth of stock in defense... 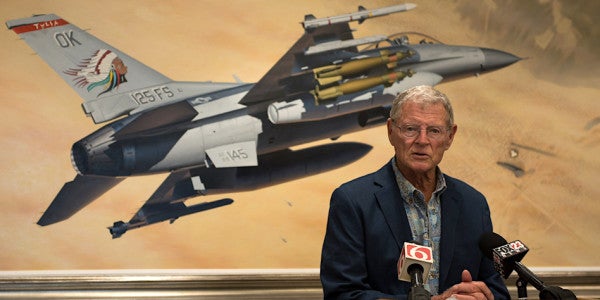 U.S. Sen. Jim Inhofe purchased — and quickly sold — tens of thousands of dollars worth of stock in defense contractor Raytheon this week after advocating for a record-high defense budget.

On Tuesday, Inhofe's broker bought between $50,000 and $100,000 in Raytheon stock, according to financial disclosure documents first reported by The Daily Beast.

The senator canceled the transaction after being asked about it by a Daily Beast reporter and urged his broker to avoid defense and aerospace stock in the future.

“All of Sen. Inhofe's financial transactions are handled by a third-party adviser,” she added. “The senator has had no involvement in and has not been consulted about his stock transactions. As such, the senator was not aware of this stock purchase until it came through the system very early (Wednesday) morning.”

Inhofe is chairman of the Senate Armed Services Committee and a defense hawk who consistently pushes for increases in defense spending. This week, he convinced President Donald Trump to support a hike in the Pentagon's budget from $717 billion to $750 billion for fiscal year 2020.

“Sen. Inhofe buying stock in a defense contractor at the same time that he is promoting a big increase in taxpayer spending on defense just reeks of the swamp,” said Brendan Fischer with the Campaign Legal Center, a nonpartisan watchdog group.

“If Sen. Inhofe were in the executive branch, he likely couldn't buy or hold Raytheon stock. Executive officials are barred from even holding stock in companies that could present a conflict. But senators have declined to adopt similar rules for themselves.”

Federal ethics laws allow lawmakers to trade stock, so long as they use only public information when doing so. Because the increase in defense spending was publicly announced prior to Inhofe's stock purchase, it seemingly was within the letter of the law.

On Wednesday, Inhofe wrote a letter to his broker, Keith Goddard with Tulsa-based Capital Advisors, instructing him to no longer purchase stock in defense or aerospace companies “because of my new position as chairman of the Senate Armed Services Committee.”

Inhofe had been interim chairman for much of 2018 before formally taking over the committee in September after the death of Sen. John McCain.