Editor’s Note: This article by Matthew Cox originally appeared onMilitary.com, the premier source of information for the military and veteran community. In... 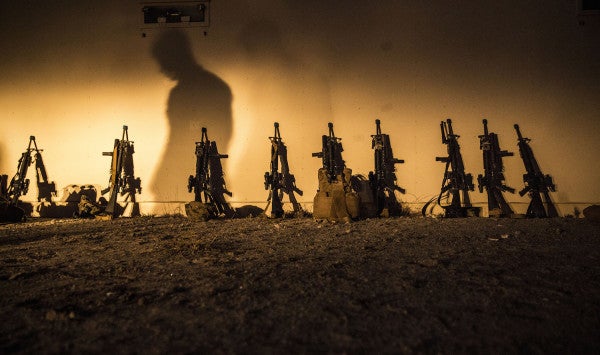 In the wake of the second deadly insider attack in Afghanistan this year, experts say that these incidents are an unfortunate reality of the train, advise and assist mission: that U.S. troops cannot avoid living among killers in disguise.

The latest suspected green-on-blue attack occurred Monday. Killed in the attack was Command Sgt. Major Timothy Bolyard, the top enlisted soldier for the Army’s new 1st Security Force Assistance Brigade, a unit designed for Afghan advisory missions. One other service member, who was not identified, was wounded. Afghan security personnel or insurgents wearing Afghan uniforms are suspected in the attack.

Since 2007, insider attacks have killed 157 coalition personnel, according to the Modern War Institute at the U.S. Military Academy at West Point. The institute did not break down the numbers to show how many of the victims were U.S. personnel.

“It's going to happen,” Jason Dempsey, an adjunct fellow for the Center for New American Security, told Military.com. “You are talking about a security force of about 300,000-plus. You've got changing loyalties, you've got desertion rates up to 25 percent … dudes are flowing out of the Afghan military nonstop.

“There is absolutely no way to stop it.”

Anthony Cordesman, the Arleigh A. Burke Chair in strategy at the Center for Strategic and International Studies, said he is surprised that there have been so few of these attacks.

“It's one thing to look back and say, 'there were some of these incidents when you had 100,000 Americans in the field, but right now they are almost the inevitable option for the Taliban,'” Cordesman said.

“We have to understand — this is a war; it is a war being fought on an ideological level and ethnic and sectarian level. … I don't want to say that this means you can disregard these sort of attacks, but I think given the numbers it's not surprising that they are taking place. It is surprising that are so low.”

The U.S. presence in Afghanistan is now mainly dedicated to the train, advise and assist missions working with Afghan forces that in many cases have never worked with U.S. personnel before, experts maintain.

Related: The Insider Attack In Syria That The Pentagon Denies Ever Happened »

Dempsey, an Army infantry officer who deployed twice to Afghanistan, said he investigated a green-on-blue incident in 2012 that left two U.S. contractors dead.

“A U.S. unit just showed up and hung out at a checkpoint with a bunch of Afghans, and there was a hothead in the group of the Afghans who the Afghans knew didn't like Americans,” Dempsey said. “He was fighting the Taliban, but he didn't like the Americans.”

An argument ensued and a “point-blank firefight broke out,” Dempsey said.

The investigation revealed that the Afghans said “if anybody would have told us that the Americans were going to show up, that dude wouldn't have been there,” Dempsey said.

The U.S. military is investigating the Sept. 3 attack, as it does with all attacks of this nature.

“Almost inevitably, when there is an incident like that, people on both sides almost have to overreact,” Cordesman said. “First, you have to send a message that there is discipline and retribution; second, you have to reassure people and third essentially take time to investigate because what can be just one case could become far more dangerous if there is any kind of cell.”

Trust is something that “you are always building and rebuilding,” Cordesman added.

The Sept. 3 insider attack occurred a day after Army Gen. Scott Miller assumed command of Operation Resolute Support. The change of command comes at a time when Taliban forces have increased their attacks on high-profile targets and rejected the recent offer for a ceasefire from Afghan President Ashraf Ghani.

“You have a very narrow, small part of American society taking all these risks for us,” Cordesman said. “We can't eliminate those risks and be effective.”