When a trainload of tanks, guns, and other military hardware supposedly seized from the Syrian battlefields pulled up at Kursk railway station on a cloudy afternoon this week, a jubilant crowd was there to greet it. 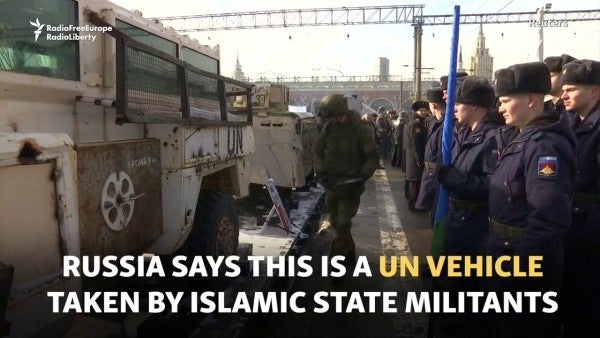 KURSK, Russia — When a trainload of tanks, guns, and other military hardware supposedly seized from the Syrian battlefields pulled up at Kursk railway station on a cloudy afternoon this week, a jubilant crowd was there to greet it.


“The next generation must understand that the enemy is not far away,” said Acting Regional Governor Roman Starovoit. “It must be liquidated on the threshold of our motherland's borders.”


Kursk, a city of 450,000 people five hours by train from Moscow, was the third stop on a nationwide, 28,000-kilometer propaganda tour launched by Russia's Defense Ministry to showcase the achievements of its military campaign in Syria. Putin announced the campaign in September 2015 with the promise of air support for his Syrian counterpart Bashar al-Assad's fight against the extremist Islamic State group (IS) and against rebel forces backed by the West.


The traveling exhibition, titled Syrian Breakthrough, is meant to raise support for the armed forces among a Russian population weary of the country's military campaigns in Ukraine and the Middle East, and increasingly preoccupied with problems at home amid stagnating incomes and falling real wages.

The train left Moscow on February 23, a Russian holiday named Defenders of the Fatherland Day, and will stop at 61 cities on its route to the far eastern port of Vladivostok. On its rolling platforms stand Russian T-55 tanks and American Humvees used by IS and apparently captured by the Russian Army, as well as various four-wheel drives the terrorist group customized for military operations or suicide-bombing missions.

Inside its 20 boxcar carriages are displays of IS weaponry and equipment, photo galleries glorifying the Russian military and a souvenir shop selling toy tanks and Putin T-shirts. Posted throughout are Russian servicemen fresh from tours of duty in Syria, who for 72 days will traverse this vast country sharing tales of their exploits before returning to Moscow ahead of World War II Victory Day on May 9.


“This exhibition is important for people to see what aggression is coming from terrorist organizations, and how strong they are today,” said Andrei Selivanov, a military adviser who has served in Syria since the start of the Russian campaign. “All of this shows the scale of that aggression and what tragedy could occur in the future if all of this isn't stopped and suppressed.” He did not elaborate on how the items on show came into the possession of the Russian Army, which officially has no boots on the ground in Syria.

It's not just about issuing a warning, though. From its first weeks, Russia's intervention has been accompanied by a turbo-charged campaign on state TV, with video-game style reports showing fighter jets lifting off from Russia's air base in Syria's Hmeimim and to-the-minute coverage of the targets struck. Presenters praised the might of a Russian Army revived under Putin's rule.

Parked in front of the Kursk train station was a mobile recruitment center for the armed forces. Above the door, a scrolling text listed the Russian military's claimed achievements in Syria: 1.3 million Syrian refugees returned to their homes; 1,024 towns liberated; 67,000 square kilometers of IS territory cleared. Inside, two servicemen handed out leaflets and advice to boys looking to enlist.


Much of Russia's media campaign and its official rhetoric has sought to hammer home the point that the devastating chemical attacks, which have killed hundreds of civilians in Syria, have been the work of rebel forces armed and supported by the U.S.-led coalition, and not, as the United States and United Nations claim, the Syrian government of Assad

Selivanov, the military adviser, said that was not the point of the Syrian Breakthrough exhibition. “We're not here to accuse anyone — not the West, not anyone,” he said. “The exhibition is aimed not at placing blame, but to show the scale of the tragedy that may happen.”


But inside one of the train's carriages, one exhibit appeared to paint a different picture. Two mannequins with gas masks stood around dummy equipment for chemical-weapons production. A serviceman posted to the installation rattled off lines he'd memorized from a script in his right hand, while he pointed to the relevant objects with a pointer he held in his left.


“With the help of this installation and chemical reagents made abroad, the rebels produced poisonous gas and used various methods of delivering it to the target,” the serviceman said, indicating the control board, the chemical reactor, and the electric motor that powered the set-up. The equipment had been found in the basement of a bombed-out building in Douma, a city close to the Syrian capital Damascus, in April 2018, he said. That month, a chemical-weapons attack the West blamed on Assad's government, which Russia called a Western provocation, claimed at least 70 civilian lives.


“With the help of such munitions the rebels fired on the Syrian Army and used them for shelling of civilians as a form of provocation,” the serviceman continued. He then pointed to the gas mask worn by one of the mannequins, with the words “Made in Finland” emblazoned on it. “As we see, foreign production,” he said.

The message was not lost on the crowd. Valentin Pinaev, a 63-year-old Kursk native who had come with his wife, turned to a Western reporter.

“You see, your equipment is here, too. You helped those mujahedin,” he said, using a term for Islamist guerrilla fighters who fought Soviet forces in Afghanistan during the Soviet-Afghan War. “Who cultivated IS? Do you know who? We know — but they don't talk about it over there in the West.” He then raced off with his wife to glimpse the military vehicles before the train departed.


Between June 1943 and October 1948, over 7.5 million Soviet citizens visited an
open-air exhibition of Nazi war trophies captured by the Soviet Union during World War II, and the current exhibition riffs directly off that. In one of the carriages, an entire wall is devoted to a photo gallery of that event.

But the initiative is also part of a series of similar stunts launched in recent weeks by the Russian Defense Ministry, whose Main Political Directorate is tasked with promoting patriotism and military values. In January, a train carrying 30 World War II-era T-34 tanks, which enjoy cult status in Russia for their role in repelling the Nazi invasion, left Vladivostok for Moscow. The train was greeted with crowds, fanfare, and TV cameras in every city it passed. The agitpoyezd, or propaganda train, is a legacy of the Soviet Union, which staged regular public events aimed at instilling loyalty to the state.

In recent months, Russia has escalated its rhetoric in the ongoing confrontation with the West. In his state-of-the-nation address on February 21, Putin, in a veiled reference to the United States, said that “Russia will be forced to create and deploy types of weapons that can be used not only in respect of those territories from which the direct threat to us originates, but also in respect of those territories where the centers of decision-making are located.”

It was not an isolated threat. During his flagship evening news show three days later, the content of which is almost certainly aired only with Kremlin approval, TV host Dmitry Kiselyov raised the tension once again. Sweeping his hand over a map of the mainland United States, he showed viewers the locations of those “centers of decision-making”: the Pentagon, the Jim Creek naval station, and the Camp David presidential retreat, among others.


“For now, we're not threatening anyone, but if such a deployment takes place, our response will be instant,” Kiselyov said.

Aleksandr Golts, an independent military analyst, believes Russia's military campaigns in Syria and Ukraine have fueled a militarist streak that is sweeping parts of the population, aided by an active effort on the government's part.

“A militarist hysteria is being assiduously and determinedly pumped into society,” he said in a telephone interview. “But this has not been successful. People are tired of it, and they've begun to feel fear.”


A
public opinion poll conducted last April by the independent Levada Center found that 57 percent of Russians fear that Russia's stand-off with the West could escalate into World War III. Eighteen months earlier, that figure stood at 48 percent.

“The louder the TV shouts about how Russia's regained its status as a great power, about how everyone respects us because they fear us, the more the subconscious fear grows that this can escalate into World War III,” Levada's director Lev Gudkov told RFE/RL. “It's noticeable in the focus groups we hold.”

Still, Gudkov attributes far greater influence to TV propaganda than individual initiatives like Syrian Breakthrough. The Syrian war feels far away to Russians and has not yet become a damaging political issue for Putin's government.

Svetlana Sryvkova came to the exhibition with her son and daughter. She viewed the event primarily as a nice outing for the family.
Radio Free Europe/Radio Liberty/Matthew Luxmoore

In the same 2018 poll by Levada, 55 percent of respondents said they follow that military campaign only superficially, while just under one-third pay close attention.

“People don't really understand why the Russian Army is there, or what the motive is. Initially there was some public pushback, but when propaganda convinced people that this will be a short operation without ground forces, the population calmed down and began supporting it,” said Gudkov. “There's no major resistance.”

For Svetlana Sryvkova, who'd come to view the exhibition with her son Danilo and her daughter Ania, watching her children scale a captured tank or examine a German rifle is first and foremost a fun day out for the family. She said she follows the campaign in Syria, and while she hopes it ends soon, she feels she understands the motives behind Russia's involvement.

“We are patriots of our country! I'm proud of our army. Our guys fight for peace there, not for war. Right?” she said. “That, I support.”

~popular_source-pageview
analysis
How The Other Half Fights
news
Russia