President Donald Trump has repeatedly clashed with his national security adviser H.R. McMaster in front of his staff, according to … Continued 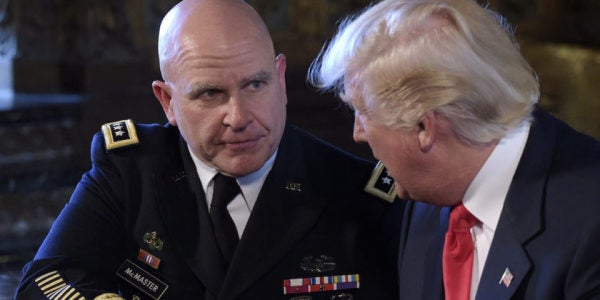 President Donald Trump has repeatedly clashed with his national security adviser H.R. McMaster in front of his staff, according to a new column by Eli Lake at Bloomberg.

The three-star Army general is being increasingly sidelined in favor of other advisers, as Trump has become “disillusioned” with him, according to Lake. Three White House officials told Lake the president was “livid” after McMaster called his South Korean counterpart to assure him a threat to make Seoul pay for the advanced THAAD missile defense system was not official policy.

Trump also complained in front of McMaster that he was “undermining my policy,” according to two White House officials who spoke with Lake.

The White House did not immediately respond to a request for comment from Business Insider. However, Bloomberg received a statement from Trump that said: “I couldn't be happier with H.R. He's doing a terrific job.”

McMaster received plenty of praise when he was tapped to replace retired Lt. Gen. Michael Flynn at the White House. Many pundits noted his strategic expertise, Ph.D. education, heroism during Desert Storm, and respect among the rank-and-file as being good news for Trump's NSC.

But, as I noted in February, McMaster is also known not to be a “yes” man, which may be rubbing Trump the wrong way.

Here's what I wrote then:

McMaster is the kind of guy who says what's on his mind and will call out a wrongheaded approach when he sees one. That tendency is something that junior officers love, but those maverick ways are not well-received by some of his fellow generals. Put simply: McMaster isn't a political guy, unlike other officers who are trying to jockey for position and move up in their careers.

In 2003, for example, McMaster criticized then-Defense Secretary Donald Rumsfeld's Iraq War plan that placed too much of an emphasis on technology. McMaster also pushed back on his boss' refusal to admit an insurgency was starting to take hold in 2004.

He has been held back in his career because of it — he was passed over two times for his first star — but it wasn't because of incompetence. Instead, his fight to be promoted from colonel to brigadier general was seen as pure politics, and McMaster doesn't like to play. He was eventually promoted in 2008, but that hasn't made him any less outspoken.

For now, it seems to be a he said, she said situation as far as McMaster's standing in the Trump White House. Though it's worth noting that the White House was publicly praising the performance of McMaster's predecessor Michael Flynn just hours before he was fired.