Senior officials at the FBI, the CIA, the Office of the Director of National Intelligence, and the Department of Justice... 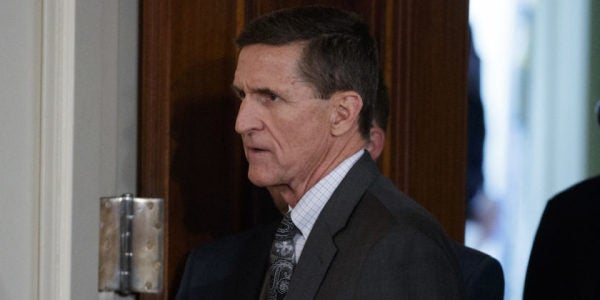 Senior officials at the FBI, the CIA, the Office of the Director of National Intelligence, and the Department of Justice knew as early as January that former national security adviser Michael Flynn could have been vulnerable to Russian blackmail, The New York Times reported on Tuesday.

Despite officials' knowledge of the risks associated with Flynn, The Times said, he continued to sit in on meetings during which President Donald Trump was briefed on sensitive intelligence.

It is unclear whether CIA Director Mike Pompeo, who The Times said briefed Trump on intelligence while Flynn sat nearby, was aware of officials' concerns about Flynn.

When lawmakers asked Pompeo during a Senate Intelligence Committee hearing whether he was privy to concerns regarding Flynn, Pompeo did not answer. “I can't answer yes or no,” Pompeo said. “I regret that I'm unable to do so.” One administration official told The Times that Pompeo did not relay any doubts surrounding Flynn to Trump.

Flynn has been a central character in congressional and FBI investigations into Russian interference during the 2016 election and whether the Trump campaign played a role. He was forced to resign as national security adviser in February, with the White House saying he had misled Vice President Mike Pence about contacts he had with Russia's ambassador to the US, Sergey Kislyak.

After his resignation, it emerged that Sally Yates, then the acting attorney general, had warned the White House on January 26 that Flynn could be subject to blackmail from the Russians because US intelligence agencies knew Pence had publicly mischaracterized interactions Flynn had with Kislyak. Flynn did not resign until February 13, which was 18 days after Yates informed the Trump administration of her concerns.

Later, it was reported that Flynn had informed the Trump transition team in early January that he was under FBI investigation for failing to register as a foreign lobbyist when he provided services to the Turkish government. He had relayed the information to Don McGahn, a member of the transition team who now serves as White House counsel. Yates, too, testified before the Senate Judiciary Committee that she had informed McGahn first about concerns that Flynn could be compromised.

Following Flynn's resignation, a slew of media reports raised further questions about whether he had violated the law. His lawyer, Robert Kelner, said Flynn was willing to testify before FBI and congressional investigators in the ongoing Russia investigations in exchange for immunity. Lawmakers have not taken him up on that proposal.

Last month, Flynn was subpoenaed by the Senate Intelligence Committee and asked to turn over documents related to his contacts with Russian officials. Flynn's lawyer said his client intended to invoke his Fifth Amendment rights in response to the subpoenas, but a person close to Flynn later said the former national security adviser would cooperate with the demands. In early June, Flynn turned over 600 pages of documents to the Senate intelligence panel.

Flynn and his lobbying firm, Flynn Intel Group, were also subpoenaed by the House Intelligence Committee.