The Pensacola gunman obtained a handgun through a federal loophole that allows foreign nationals to own a gun if they have a hunting license. 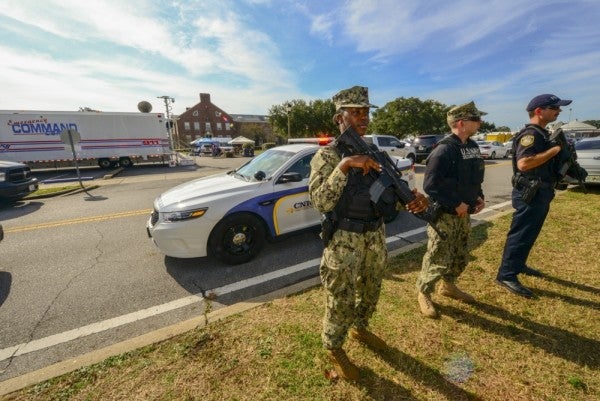 At a news conference last week, U.S. Attorney General Bill Barr called the NAS Pensacola shooting “an act of terrorism … motivated by jihadist ideology.” As a result of an FBI investigation, 21 Saudi military students in the United States, including 12 from NAS Pensacola, were sent back to their home country.

Esper will be in Florida on Wednesday and Thursday. In addition to NAS Pensacola, he will visit U.S. Southern Command headquarters near Miami.

In a Friday statement, the DoD's Garry Reid, director of defense intelligence, said the new approach to vetting and security issues will include expectations for both U.S. military personnel and foreign students.

Among the upcoming changes, Reid said, the DoD will establish “new restrictions on international military students for possession and use of firearms … .”

Alshamrani obtained the 9mm handgun he used in the Dec. 6 shooting through a federal loophole that allows foreign nationals in the United States on a visa to legally own a gun if they have a hunting license. In Florida, a hunting license can be obtained after successful completion of an online gun safety course.

Also according to Reid, as defense officials increase vigilance over foreign military students, they will institute “control measures for limiting their access to military installations and U.S. government facilities.”

Specifically with regard to vetting, new procedures will “include capabilities for continuous monitoring of international military students while enrolled in U.S.-based training programs,” Reid said.

And, Reid added, the U.S. military internally “will also impose new standards for training and education on detecting and reporting insider threats … .

“We will never forget those that perished in this attack,” Reid said of the NAS Pensacola shooting victims. “Their service and ultimate sacrifices embody our values, and they will live on forever in our hearts and minds.”