Internet Reacts To Kaepernick’s Announcement To Stand During National Anthem

Colin Kaepernick’s decision to kneel during the national anthem prior to games last season sparked much controversy and debate. It... 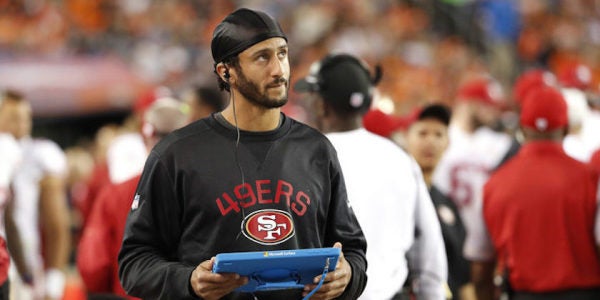 Colin Kaepernick’s decision to kneel during the national anthem prior to games last season sparked much controversy and debate. It outraged some. It drew praise and support from others.

On Thursday, the San Francisco 49ers quarterback decided to reverse field. He vowed to stand for the anthem next season. The decision made many raise an eyebrow, as Kaepernick is planning on opting out of his deal with the 49ers and becoming a free agent. Will this make him more attractive to teams?

It touched off a bit of a firestorm on social media. Some called him a sell out. Some supported him, thanking him for his protest efforts.

Like him or hate him, there is no denying he has done many good things with his fame – he has pledged to donate $1 million to charities that support racial equality, and has already doled out $400,000 of that money.

Here’s a bit of the reaction he got on social media to Thursday’s announcement: