Roscoe Brown, the last of the Tuskegee Airmen pilots known to live on Long Island, told his family he did... 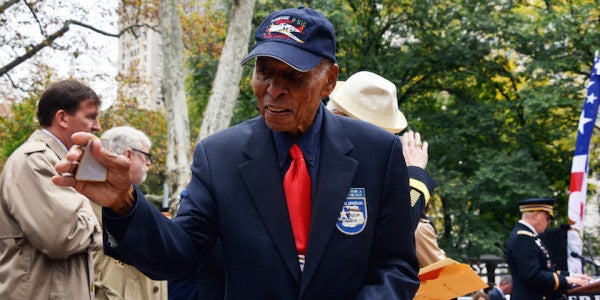 Roscoe Brown, the last of the Tuskegee Airmen pilots known to live on Long Island, told his family he did not want an elaborate church funeral. He wanted a jazz band to play instead, and for people to get together over shared stories and maybe a cold beer.

“He wanted the music to carry the story of how Roscoe Brown loved life and all of his various families — his friends, his political family, his educational family,” said his son, Dennis Brown, 65, of Sag Harbor.

Roscoe Brown, who died July 2 at the age of 94, got his wish Friday at the Intrepid Museum, where a band played C Jam Blues and other jazz favorites, and a cross-section of New Yorkers gathered on the deck of the massive aircraft carrier to remember the pilot, educator and activist.

The memorial ceremony was punctuated by an aerial demonstration when planes from the Alabama-based 100th Fighter Squadron that Brown once commanded streaked down the Hudson River and over the carrier’s flight deck in a “missing man” formation shortly before 5 p.m.

“The music was outstanding, which is what Roscoe would have wanted,” said Congressman Charles Rangel (D-Harlem), one of several current and former government officials, educators, community activists and longtime friends who attended. Former Gov. David Paterson, former New York City schools chancellor Dennis Walcott and former Mayor David Dinkins, all personal friends of Brown, were among them.

Brown, who had homes in Riverdale and Sag Harbor, is credited as the first American pilot to shoot down a German jet during World War II. He later earned his doctorate in physiology and became a college professor, first at New York University and later at the CUNY Graduate Center.

With a trademark grin, he was known as a consummate networker. Several said it was fitting that the tribute drew such a cross-section of society.

Ed Small, a retired social worker, said Brown was the first black teacher he ever had when he enrolled in a class at NYU.

“It was inspiring when I saw what he had achieved,” said Small, who traveled from his home in Chapel Hill, North Carolina, to attend.

The Tuskegee Airmen were black aviation personnel whose success during World War II helped persuade the White House to end segregation in the U.S. military.

The Tuskegee program was organized in 1941, after the National Association for the Advancement of Colored People pressured President Franklin Roosevelt to end the U.S. Army’s ban on African-American pilots.

The program eventually trained thousands of pilots, navigators, bombardiers, gunners and other air and grounds crew members at Tuskegee Army Airfield in Alabama. The success of the program, which had to overcome racist opposition among Army officers, is credited with persuading President Harry S. Truman in 1948 to sign Executive Order 9981, ending segregation in the U.S. armed forces.

Brown’s passing is indicative of how quickly the last of the Tuskegee Airmen, whose post-war activism helped usher in the civil rights era, is disappearing.

Yesterday’s memorial service for Brown was held just hours after another veteran who served with the Tuskegee Airmen, Dabney Montgomery, 93, was buried at Calverton National Cemetery in Calverton.

Montgomery, who between 1943 and 1945 served with the 1051st Quartermasters Company attached to the 96th Air Service Group while stationed in Ramitelli, Italy, died Saturday at his Harlem home after a long illness.

Friday’s gathering drew the children of several of the Tuskegee Airmen, including Derek Wheeler. His father, pilot William Wheeler, of Hempstead, died in 2011.

Derek Wheeler, a retired vice president of finance at Lehman College in the Bronx, said he likely would not have had the career he did had Brown not taken a personal interest in his success.

“Roscoe was always giving me advice,” Wheeler said. “He was the consummate mentor.”