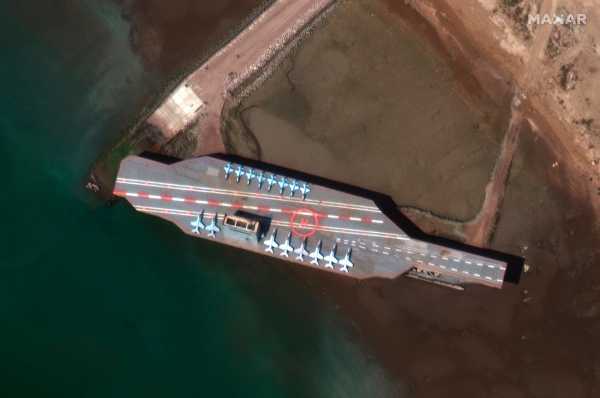 Last Monday marked the start of “Great Prophet 14,” the latest military exercise by Iran's elite Islamic Revolutionary Guard Corps (IRGC) in the Strait of Hormuz and the Persian Gulf.

It included rocket and missile launches, anti-aircraft fire, drone attacks, and ship maneuvers, culminating in an attack a barge designed to look like a U.S. Nimitz-class carrier.

Footage showed the mock carrier carrying fake aircraft and being hit by a missile fired from an underground launcher. Divers attached limpet mines to its hull, armed speedboats circled it, and commandos fast-roped onto its deck from a helicopter.

The drills come amid heightened tensions between Iran and the United States.

In the years since President Donald Trump withdrew from the nuclear deal known as the Joint Comprehensive Plan of Action in 2018 and tightened sanctions, Iran has attacked and threatened targets across the region.

Tensions peaked in January, when the U.S. killed the head of the IRGC's Quds Force in a drone strike. In response, Iran fired cruise missiles at Iraqi military bases, injuring 110 U.S. troops.

While no direct action has occurred since then, this week's drill shows Iran is still preparing for a larger conflict and that its surrounding waters will be the main venue for it.

A tale of 2 navies

Iran's waters are divided between the Persian Gulf and the Gulf of Oman. They are connected by the Strait of Hormuz, which is only 21 miles wide at its narrowest point and is the busiest shipping lane for petroleum in the world. The region as a whole has over half of the world's proven crude oil reserves.

Defense of Iran's waters is divided between the Islamic Republic of Iran Navy (IRIN) and the Islamic Revolutionary Guard Corps' naval component, the IRGCN. The IRIN is part of Iran's regular military while the IRGCN answers to the IRGC, an independent military force responsible for guarding Iran's political system and furthering the ideals of the Islamic revolution.

Despite being Iran's official navy, the IRIN's exclusive areas of operations are limited to the Gulf of Oman and Caspian Sea. The IRGC, on the other hand, is solely responsible for defending the Persian Gulf, although both forces share responsibility for the Strait of Hormuz.

Additionally, the IRIN operates about 19 submarines. Three are Russian-built Kilo-class attack subs purchased in the 1990s. The rest are mini submarines, like the Ghadir-class, a copy of North Korea's Yono-class, that can launch torpedoes and missiles. Ghadirs can operate in shallow water and their size can make them difficult to detect.

Despite being small in size and number, the subs are suited for the defensive conflict scenarios Iran faces.

The IRGCN relies almost entirely on over 1,000 small vessels known as fast attack craft (FAC) and fast inshore attack craft (FIAC). These are essentially speed boats armed to the teeth with rockets, missiles, and heavy machine guns and are meant to swarm enemy surface ships with heavy fire.

The IRGCN has a reputation for being extremely hardline and aggressive, even among the IRGC.

“They are more formidable and more zealous in terms of religious and revolutionary ideals,” Farzin Nadimi, an expert at The Washington Institute specializing in defense affairs for Iran and the Persian Gulf, told Insider.

That dedication would put the IRGCN front and center in a conflict in the Gulf.

This military structure enables Iran to fight both conventionally and asymmetrically. Iran's arsenal of ship- and shore-launched cruise missiles, FACs and FIACs, naval mines, submarines, drone aircraft, anti-ship ballistic missiles, and air-defense systems would create a no-go zone all over the Gulf.

In the event of war, the IRIN and IRGC would most likely immediately set out to mine the Strait of Hormuz and Persian Gulf. Thousands of Iran's estimated 5,000 mines would be deployed as quickly as possible.

Iran would then turn to its most effective weapon: ballistic missiles. Iran's missile arsenal is the largest and most diverse in the Middle East, with some reportedly able to reach as far as 2,000 kilometers. Iran could launch hundreds or thousands of missiles at multiple targets across the region.

Because the Persian Gulf is such a confined area, the missiles may arrive in minutes, and the sheer number of them could overwhelm anti-missile defenses.

But Iran's targets would not just be limited to military facilities. They would likely aim at everything of value: oil wells, tankers, refineries, and even royal yachts — all to make any conflict as costly as possible by destabilizing the region and the global economy.

“They will pick a fight all over the region to not only saturate the enemy, but saturate the international media with bad news,” Nadimi said.

While the IRGC and IRGCN set about controlling the Persian Gulf and closing the Strait of Hormuz, the IRIN will sortie into the Gulf of Oman to face any U.S. or coalition ships that may come to strike back.

It is uncertain if Iran's forces could successfully achieve such goals. As Nadimi noted, “how long they can sustain that depends on how much the other side is determined to stop them.” If Iran “goes all the way,” the U.S. and its allies will too, Nadimi said.

And the U.S. and its allies have advanced capabilities of their own — most notably in naval and airpower. The IRGCN's swarm tactics will likely prove unsuccessful against a large and technologically superior flotilla with air support.

Regardless, any conflict with Iran will be extremely costly. The IRIN and IRGCN have been training for this exact scenario for decades. They have a geographical advantage, a capable missile arsenal, dedicated soldiers, and a number of proxies willing to create chaos in neighboring countries like Iraq and Yemen.

And with the international arms embargo on Iran ending in October, Iran may get access to more advanced weaponry and equipment from China and Russia.

“The IRGCN is dug in and will be a difficult enemy to destroy.” Nadimi said. “It won't be easy for the U.S. to turn the tide.”