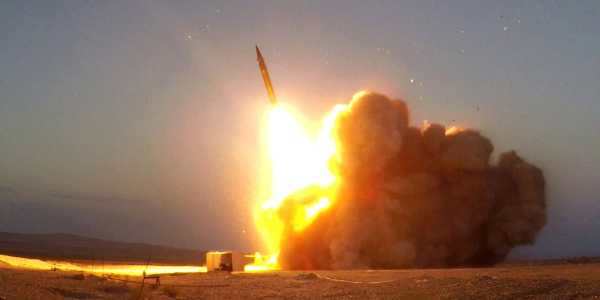 “The surface-to-surface missile, called martyr Qasem Soleimani, has a range of 1,400 km,” Minister of Defense Amir Hatami announced in a televised address, according to Reuters.

He also introduced a cruise missile named after Abu Mahdi al-Muhandis, an Iraqi militia commander who was also killed when an US drone targeted Soleimani's convoy in Baghdad in January.

“Missiles and particularly cruise missiles are very important for us,” Iranian President Hassan Rouhani said during the National Defense Industry Day event, adding, “The fact that we have increased the range from 300 to 1,000 in less than two years is a great achievement.”

No US military personnel were killed in the ballistic missile attack, but in the aftermath, more than 100 U.S. service members were diagnosed with mild traumatic brain injuries of varying severity.

The exchange in January brought the U.S. and Iran to the brink of armed conflict, but the fact that there were no casualties in the ballistic-missile attack gave both sides the opportunity to de-escalate. Nonetheless, tensions persist.

Secretary of State Mike Pompeo will travel to New York on Thursday to inform the UN that the U.S. is invoking the “snapback” mechanism included in the Security Council resolution on the 2015 Iran nuclear deal, also known as the Joint Comprehensive Plan of Action.

Breaking with some allies and partners, the U.S. withdrew from the Iran nuclear deal in 2018.

The snapback mechanism allows for the reinstatement of the crippling international sanctions that were eased in exchange for Iran's adherence to restrictions placed on its nuclear program.

The move, which has already drawn criticism from Russia, China, and others, is likely to face significant opposition given that it follows a failure just last week to convince the Security Council to extend an arms embargo on Iran.

The Trump administration has argued that the Iran deal, which Trump has condemned as “the worst deal ever negotiated,” does not adequately prevent Iran's development of nuclear weapons, hinder its ballistic-missile program, or curb its malign activities in the region.

U.S. withdrawal from the agreement has reignited longstanding tensions with Iran that have on more than one occasion escalated to the exchange of fire.