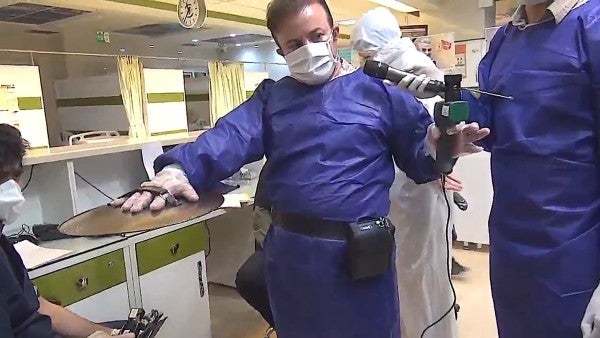 The unveiling of a device that purportedly uses magnetic waves to detect novel coronavirus (COVID-19) infections up to 100 meters away was staged as a moment of triumph for Iran’s Islamic Revolutionary Guards Corps (IRGC).

The IRGC, a powerful combination of military, intelligence, political, and economic forces, has come under intense criticism in recent months for its seemingly accidental downing of a Ukrainian passenger jet after takeoff from Tehran airport in January with air-defense forces on high alert.

“This is an amazing scientific technique that has been tested across various hospitals,” IRGC commander Maj. Gen. Hosseini Salami, who was wearing a mask, said at the televised inauguration on April 15.

But many have mocked the equipment as a “novel and singular scientific advancement.”

Critics on social media quickly pointed to its resemblance to a bogus bomb detector once sold by British fraudsters who were convicted and jailed for their scam nearly a decade ago.

Their fake device was bought and used in Iraq and other countries, the BBC reported.

The Iranian Health Ministry's quick response to the televised plug — stressing that the device had not been licensed by regulators — also appeared to highlight discord among senior officials as they battle to confront widespread infections amid the global pandemic.

The SARS-CoV-2 virus that causes the deadly COVID-19 illness has officially infected nearly 78,000 Iranians and killed nearly 4,900, although those numbers are thought by many to be vast underestimates.

Salami said the new, antenna-fitted device generates a magnetic field that screens a 100-meter radius for infections and points in the direction of identified targets.

He said it was developed by scientists serving the IRGC’s Basij paramilitary force and is a suitable choice for mass screening without the need for blood samples.

Most of the coronavirus testing around the world so far is so-called genomic testing that is conducted by taking a swab of the nose or throat that is then sent to labs looking for the presence of the virus. A second form of test, known as serological or antibody testing, uses a blood sample to determine a past infection.

Iran’s Health Ministry says it has so far conducted over 310, 000 coronavirus tests.

The new tool appears to be part of the IRGC’s efforts to improve its tarnished image after its air-defense troops shot down Ukraine International Airlines Flight 752, killing all 176 abroad, around the time of exchanges of air fire by Iranian and U.S. forces.

Hours before the January 8 downing of the plane, the IRGC conducted a missile attack on bases in Iraq that house U.S. troops over the assassination in a U.S. drone attack days earlier of IRGC Quds Force commander Qasem Soleimani. IRGC leaders who took responsibility for the downing of the plane three days after it happened said that the human error behind it was “unintentional” and that an operator had fired two missiles at the plane after mistaking it for a cruise missile.

There is also lingering Iranian public anger over a deadly November 2019 crackdown on antiestablishment protests that left at least 300 dead, according to Amnesty International.

“The IRGC could not distinguish a passenger plane from a missile, how can we believe that it can detect a virus in nanometer dimensions in less than five seconds,” a user said on social media.

The unveiling of the IRGC device also highlighted tensions between Iranian hard-liners and pragmatists as a bitter rivalry continues despite the deadly coronavirus outbreak in the country, the worst in the Middle East.

Asked about the purported detector, Iranian Health Ministry spokesman Kianush Jahanpur said it had not been licensed by the country’s Food and Drug Organization.

“If this device had been approved by the Health Ministry, it would definitely have been announced at its unveiling,” Jahanpur said, adding that his ministry is in charge of licensing such equipment.

Hesamedin Ashena, an adviser to Iranian President Hassan Rohani, urged the state broadcaster, which is controlled by hard-liners, to avoid airing advertisements for unapproved tools or medications.

“In a situation where society is confronted with strange news every day, refrain from broadcasting advertisements in the news sections and don’t promote vaccines, medications, diagnostic kits, or innovative and unique virus detectors…,” Ashena tweeted, avoiding mention of the powerful IRGC, whose head is directly appointed by Supreme Leader Ayatollah Ali Khamenei, who has the last say on political and religious affairs in Iran.

Last month, a youth group thought to be affiliated with the IRGC said it was ready to send humanitarian aid to the people of the United States to fight the coronavirus.

The government quickly dismissed the stunt as “a rumor,” with Jahanpur saying his country is in no position to send medical equipment and supplies to any other country.

Also in March, Jahanpur criticized a large funeral procession held for a former IRGC commander that was held near the Iranian capital in apparent disregard of government calls for social distancing to tame the deadly pandemic.