CENTCOM said the U.S. had been unsuccessful in recovering any debris. 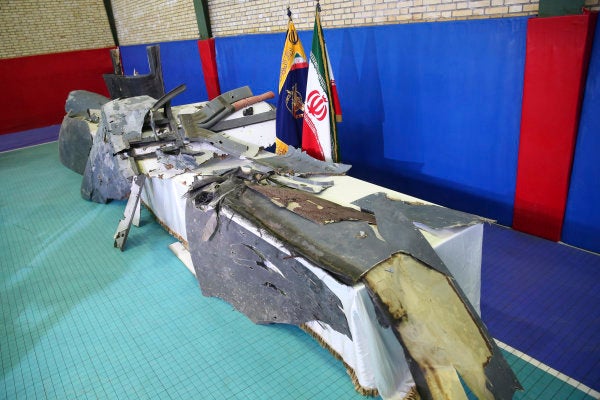 Iran made a trophy show Friday of purported wreckage from a downed U.S. drone as President Donald Trump said he called off a retaliatory strike to avoid killing Iranians.

Brig. Gen. Amir Ali Hajizadeh, commander of the Islamic Revolutionary Guard Corps (IRGC) aerospace force, posed with debris that officials said was pulled from the sea near the Straits of Hormuz and taken to Tehran for display, according to Iran's Tasnim news agency.

The military had said that unmanned aerial vehicle system shot down Thursday over the Gulf was a $100-million plus Northrop Grumman RQ-4 Global Hawk operated by the Navy, but Iranian officials described it as a similar Northrop Grumman MQ-4C Triton, Tasnim reported.

Video from Iran's state-sponsored news agency Press TV purported to show the launch of the surface-to-air missile that shot down the drone. It depicted a truck-mounted Khordad 3 air defense system firing a Sayyad 2 missile at the target that allegedly violated Iranian airspace. U.S. officials have maintained that the Global Hawk was at least 21 miles outside Iranian airspace when it went down and did not enter Iranian airspace at any point during its flight.

The shootdown of the Global Hawk, following the explosions last week that set two tankers ablaze in the Gulf of Oman, marked the latest escalation in the crisis in the region and raised concerns about how the U.S. would respond.

In a series of tweets Friday morning and in an interview with NBC's Chuck Todd for the “Meet the Press” program on Sunday, Trump said he had given the military the go-ahead for a retaliatory strike at the launch site and radar installations supporting the missile that shot down the drone, but called the operation off about 10 minutes before it was set to begin.

He said no warplanes had been launched — possibly referring to F/A-18Super Hornets from the aircraft carrier Lincoln in the Gulf region — before he gave the order to stand down, out of concern that the action would lead to a wider war.

In segments of the NBC interview that were aired Friday on MSNBC, Trump said he began having concerns about how many Iranians might be killed in retaliation for the downing of an unmanned drone.

The military was “ready to go, subject my approval,” Trump said.

But then, he said, he asked his generals: “I want to know something before you go. How many people would be killed, in this case Iranians?”

When the unnamed generals said about 150, Trump said he thought about it for a second.

“And I said, you know what — they shot down an unmanned drone, plane, whatever you want to call it, and here we are sitting with 150 dead people that would have taken place probably within a half an hour after I said, 'go ahead,'” Trump said. “And I didn't like it, I didn't think, I didn't think it was proportionate.”

In a series of tweets earlier, Trump made the same point, saying that the military was “cocked and loaded” for airstrikes. But, he said, he intervened at the last minute to avoid inflicting casualties.

“I am in no hurry” to attack Iran, Trump said, but added that efforts by the regime to acquire nuclear weapons would change his calculus.

In what may have been an effort to show the multiple-target capabilities of Iran's air defenses, Hajizadeh, the IRGC aeroforce commander, said his systems could have shot down a U.S. P-8Poseidon surveillance aircraft and killed Americans Thursday, but he chose instead to target the Global Hawk to avoid inflicting casualties.

The P-8 anti-submarine, anti-surface warfare aircraft “was also violating our airspace and we could have downed it too,” Hajizadeh said, according to a report from Iran's Fars news agency. But the Global Hawk was targeted “because our aim was to warn the terrorist forces of the U.S.,” rather than start a conflict, Fars reported.

In a statement late Friday, Lt. Col. Earl Brown, a spokesman for U.S. Central Command, said that the U.S. thus far had been unsuccessful in recovering any debris from the Global Hawk.

He said the drone was hit by the missile at high altitude and, consequently, left a large debris field.

“We dispatched assets to recover debris. However, due to a large debris field and high winds and heavy seas, we have no reports of recovered debris,” Brown said in the statement, released in question-and-answer form.

He did not respond directly to Iranian charges that the U.S. was warned several times prior to the missile launch by the IRGC that the Global Hawk and the P-8Poseidon were in violation of Iranian airspace.

“We are aware of the IRGC's claims,” Brown said. “At no point in time did any U.S. aircraft enter Iranian airspace on June 19, 2019. U.S. aircraft routinely operate in the region, and do so in a manner consistent with international law.”

“Yes, the U.S. routinely flies missions in the area, and does so in a manner consistent with international law,” he said.

SEE NEXT: Trump confirms that the US was 10 minutes away from striking Iran before he called off the attack

WATCH ALSO: Iran's New Fighter Is An Omen Of Things To Come