It's been more than a year since U.S. Navy ships in the Persian Gulf have had what they call unsafe... 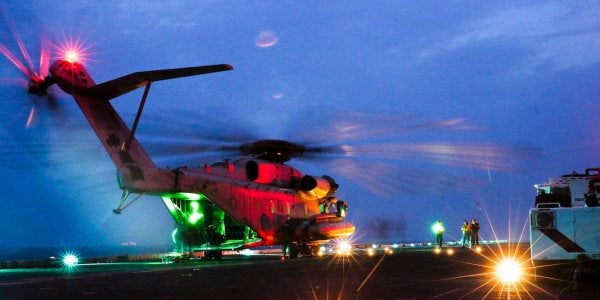 It's been more than a year since U.S. Navy ships in the Persian Gulf have had what they call unsafe or unprofessional interactions with Iranian vessels, but Iran has found a new way to keep tabs on U.S. warships in one of the world's most heavily trafficked sea corridors.

Lt. Chloe Morgan, a US Naval Forces Central Command spokeswoman, told Business Insider on Thursday that the most recent unsafe or unprofessional encounter between the U.S. and Iran at sea took place August 14, 2017.

In that incident, a drone without any navigation lights flew close to aircraft conducting night-landing operations on the American aircraft carrier Nimitz.

Before that, on August 8, 2017, an Iranian drone flew close to fixed-wing aircraft conducting flight operations, causing an F/A-18E Super Hornet to maneuver to avoid a collision, Morgan said.

While no unsafe interactions have been reported since, the Navy is still on guard.

“Even with decreased incidents, we remain concerned with the increased number of Iranian UAVs operating in international airspace at night without navigation lights or an active transponder as would be expected according to international norms,” Morgan said.

The Navy has also been absent from the Persian Gulf for extended periods this year.

When the amphibious assault ship Iwo Jima sailed into the gulf in June, it was the first time in 2 1/2 months that a capital ship had entered the region. (Some ships from the Iwo Jima's group also remained elsewhere during the operation.)

“We did go to the Persian Gulf. We got the normal welcome from the Iranians, UAVs overflights, exactly as we trained for; no surprises there,” Capt. Jack Killman, the commander of Amphibious Squadron 4, said at a conference on Tuesday.

Related: Iran Constantly Harassed The US Navy Under Obama. That Stopped Under Trump »

Two Arleigh Burke-class destroyers were also operating in the area, while the Iwo Jima was in the gulf, according to USNI News. Those destroyers, which are outfitted with powerful air search radars, can detect and identify approaching drones and boats.

Picking up smaller drones and figuring out whether they are a threat is harder, Killman said.

“The small boats” and “the UAVs are definitely out there tracking us,” he said.

Small boats and drones are just two components of the layers of asymmetric defenses that Iran has deployed to the Gulf region, particularly to the area around the Strait of Hormuz, a narrow channel in the Persian Gulf through which roughly 30% of world's oil is shipped.

Iran has also made profligate use of sea mines, which pose a unique and hard-to-counter threat to the Navy, and it recently boasted of increasing the range of its land-to-sea ballistic missiles, enabling them to strike “any vessel or ship” out to 435 miles.

The U.S. also takes the layered-defense approach, of which the destroyers are a big part. Though the Navy's capacity to keep all the needed parts of that defense in place at the same time may be an issue, Killman said.

Iranian drones' increasing presence above and around US ships hasn't changed the way the Navy operates, Morgan, the Naval Forces Central Command spokeswoman, said on Thursday.

“The United States Navy has not adjusted its operations and will continue to operate wherever international law allows,” Morgan told Business Insider, adding that the service continued to work to ensure freedom of navigation and free flow of shipping in international waters.

“The U.S. Navy continues to remain vigilant, and our commanding officers retain the inherent right to act in self-defense,” Morgan added.