Iran has built a fake version of a U.S. aircraft carrier off its Gulf coast to use as target practice in military exercises 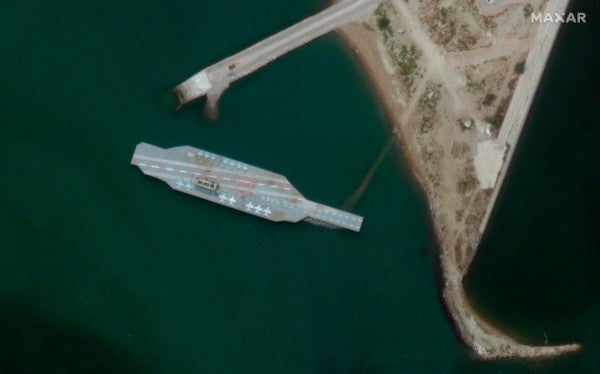 Iran has built a fake version of a U.S. aircraft carrier off its Gulf coast to use as target practice in military exercises.

The mock-up looks like one of the Nimitz-class carriers deployed by the US Navy through the Strait of Hormuz and into the Arabian Gulf.

The replica carries 16 mock-ups of fighter jets on its deck, according to satellite photos taken by Maxar Technologies. The fake carrier is floating in the southern port of Bandar Abbas. Its appearance suggests the Islamic Revolutionary Guard Corps (IRGC) is preparing a repeat of a mock sinking it conducted in February 2015.

Dr. Theodore Karasik of Gulf State Analytics in Washington told Arab News: “Iran’s attacking the real carrier battle group would obviously lead to an escalation, which all parties in the region are fully aware of. War-gaming of the 2015 IRGC naval exercise showed high casualties for such an attack.

“However, these scenarios showed Iran’s asymmetric warfare capability being low-cost and highly effective. Iran’s willingness to take the risk in the current environment is an important consideration given that tensions are high.”