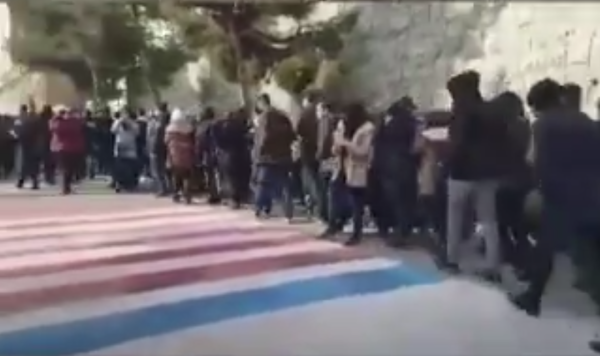 As protests swept Iran after its downing of a Ukrainian passenger plane last week, demonstrators pointedly walked around the U.S. and Israeli flags painted at the entranceway to Shahid Beheshti University campus, refusing to trample them.

At the height of the Iranian establishment anti Americanism, Tehran Beheshti university’s students refused walking over the US and Israel flag while participating in #IranProtests . They all grew up to hate the two countries but seems like the revolutionary ideology is failed. pic.twitter.com/ABQY3GzWMo

The move was an apparent show of defiance against Iran's government, reported BBC News, as the flags are put there on purpose to encourage pedestrians to disrespect them by treading on them.

“The flags were painted on the ground so that those walking along the route would thereby insult both countries — which Iran considers staunch enemies,” BBC News said.

Watch how Iranian students refuse to step on American & the flag of Israel.

This should embarrassed Iranian regime & their propaganda funeral for #Soleimani where people were told to chant “Death To America”.
Now people in Iran chanting “Death to Islamic Republic dictatorship.” pic.twitter.com/hTxDuxZeaB

Video showed students avoiding the flags, then deriding those who walked over them, according to the nongovernmental organization UN Watch.

Protests have raked the country since Iran's military acknowledged mistakenly shooting down a civilian Ukrainian after days of denial. All 176 people aboard were killed in the crash out of Tehran airport last Wednesday.

In all, 82 Iranians, 63 Canadians, 11 Ukrainians, including nine crew members, and citizens of Afghanistan, Germany, Sweden and the U.K. died in the crash.