Iran’s Missiles Are a Clear Threat. Here’s How America’s Allies Are Responding. 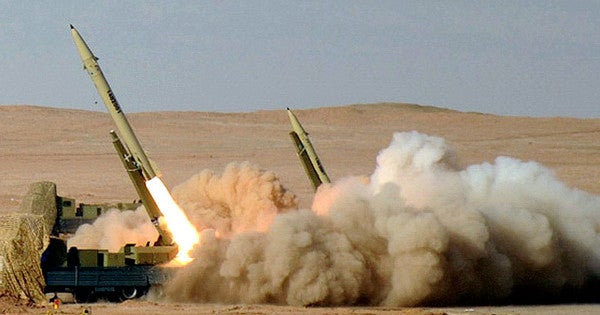 On October 3, the Trump administration withdrew from the sixty-three-year-old “Treaty of Amity” with Iran following an International Court of Justice ruling that recent U.S. sanctions violated the accord.

The move follows recent verbal sparring during the UN General Assembly where Iranian President Hassan Rouhani accused President Trump of having a “Nazi disposition” with his “America-first” worldview. Worried by increasingly polemical U.S.-Iran rhetoric, a bipartisan cohort of former politicians, intelligence officials and army officers penned a statement supporting a more balanced approach to Iran, one “which combines pressure and diplomacy.”

The recent increase in diplomatic jockeying between the United States and Iran may counterintuitively alleviate some consternation in the Gulf region, where despite the joint nuclear deal, Iran still exerted regional influence to wage proxy wars in Syria, Iraq, and Yemen.

Declining relations between the U.S. and Iran may thus signal affirmatively an increase in military and economic support to the GCC countries, shoring up regional defenses and substantially raising the cost of Iranian military action. Escalating tensions, however, also come with a higher chance of war, which, with a nuclear Iran, would pose an existential risk to the region.

In such an eventuality, defense against incoming nuclear and non-nuclear missiles would be a top regional priority.

The United States has a historical precedent of providing missile defense systems to the Gulf region: after Saddam Hussein invaded Kuwait in 1990, the United States deployed Patriot batteries to bases in Israel and Saudi Arabia. Similarly, during Operation Iraqi Freedom in 2003, PAC-2 and PAC-3 interceptors were deployed to Kuwait, Bahrain, Qatar, and Jordan, with Aegis offshore systems supplementing the batteries with additional tracking capabilities.

In the fifteen years since Operation Iraqi Freedom began, more missile defense systems have been procured by or deployed to the region: Saudi Arabia, the United Arab Emirates, Kuwait and Qatar each made bulk purchases of Patriot systems. The United States additionally deployed Patriot systems to Jordan, Kuwait, Qatar, Bahrain and the UAE.

Diversification away from Patriot missile systems has also occurred. Facing an escalating Iranian nuclear program, the United Arab Emirates applied in 2011 to be the first foreign country to acquire the THAAD system. This billion-dollar deal solidified the UAE’s status as possessing the most technologically advanced missile defense systems in the Middle East.

Should Iran continue its nuclear program, stoking more fears about a potential war, GCC countries will likely continue stockpiling missile defense systems. Another potential outcome could be the completion of a much-discussed GCC missile defense shield. Such a system would require not only United States’ buy-in, but regional multilateral defense agreements .

While countries would have to forego national rivalries and unilateral defense policies in lieu of cooperation, growing missile threats may catalyze action. Saudi Arabia has claimed to have intercepted more than 100 incoming missiles fired by Houthis in Yemen, missiles that the United States claims are primarily supplied by Iran and Hezbollah.

And should Iran’s nuclear program be proven to have restarted, the GCC would have aligned interests in a bolstered missile shield. For the United States, continuing to support a shared Gulf missile defense system is advantageous not only for its Iran policy, but also for the protection of its soldiers, expatriates and allies in the region.

Tyler Headley is a research assistant at New York University. His work has previously been published in Foreign Affairs and The Diplomat.