Iranian media affiliated with various parts of the country's political spectrum have been trumpeting a rhetoric that blames U.S., Saudi Arabia and Israel for the widespread protests in Iraq. 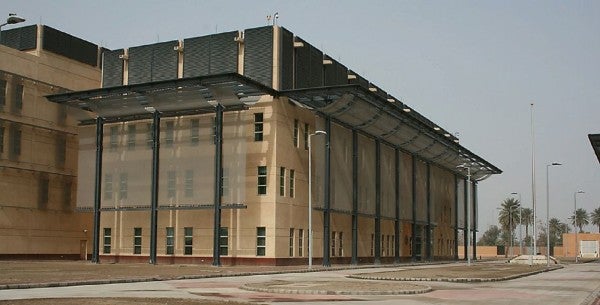 Iranian media affiliated with various parts of the country's political spectrum have been trumpeting a rhetoric that blames U.S., Saudi Arabia and Israel for the widespread protests in Iraq.

This comes while protesters and most observers believe Iran-aligned Iraqi ruling factions have mismanaged the country and tolerated corruption, driving desperate people to come out into the streets with more than 70 killed so far.

Hardline daily newspaper Kayhan, affiliated with the office of Iranian Supreme Leader Ali Khamenei, has gone as far as calling for seizing the U.S. embassy in Baghdad. Reformist Arman wrote about alleged foreign influence behind the Iraqi protests, and official news agency IRNA which operates under the aegis of the Rouhani administration in the middle of the political spectrum has charged that Saudi Arabia has spent “tens of millions of dollars on changing political trends in Iraq.

In another commentary IRNA has charged that the United States and Saudi Arabia have sent a message to Iraqi leaders and threatened to topple the regime in Iran by flaring up sectarian differences.

In a commentary by its editor Hossein Shariatmadari who is Khamenei's representative at Kayhan, the daily wrote that although the protests in Iraq were initially about “the people's financial problems as well as corruption and poor social services, those who wanted to fish in the troubled water altered the slogans to voice the ideals of the enemies of the Iraqi people.”

The Kayhan pointed out “the slogans against Hashd al-Sha'bi and the ties between the nations of Iran and Iraq, and opposition to Iranian pilgrims visit to Iraq on the occasion of religious holiday Arbaeen” during which hundreds of thousands of Iranians visit Iraq every year.

The hardline daily then claimed “There are many documents about the presence of U.S, Israeli and Saudi Wahabi agents as well as Ba'thist elements behind the Iraqi protests.”

Referring to slogans against Iranian influence behind the Iraqi protests, Kayhan wrote “half a glance at the slogans leaves no doubt that there is an American, Saudi and Israeli conspiracy” playing out in Iraq.

Kayhan's editor then argued that “U.S. embassies everywhere are the focal points of conspiracies,” and called on Iraqi youth “to put an end to the U.S. embassy's presence in Baghdad.”

“The seizure of the U.S. Embassy in Tehran has had many achievements for the Islamic Iran. Why should Iraq's revolutionary youths deprive their country from such achievements.”

On the other end of the Iranian political spectrum, reformist daily Arman wrote in an editorial headlined “Foreign Traces in Iraq's Protests” that “some people believe foreign elements are behind the escalation of the unrest, ” however, the daily did not name the foreign elements although immediately after this sentence, it claimed that U.S. Secretary of State Mike Pompeo had warned the Iraqi Prime Minister before his planned visit to China to stay in the country.

The official news agency IRNA has published at least three commentaries about the Iraqi protests during the past few days and blamed foreign players as the culprits behind the unrest in Iraq.

IRNA charged in its latest commentary that the unrest is a way of “exerting pressure on Iraqi leaders to surrender to U.S. and Saudi policies, to downgrade Iraq's ties with Iran by reducing the number of Iranian visitors, and creating seditions to harm the relations between the two nations.”

The concerted attempt by Iran's state-controlled media to trumpet the conspiracy theory about the reasons for the unrest in Iraq may indicate that the idea comes from the top of Iran's political echelon.