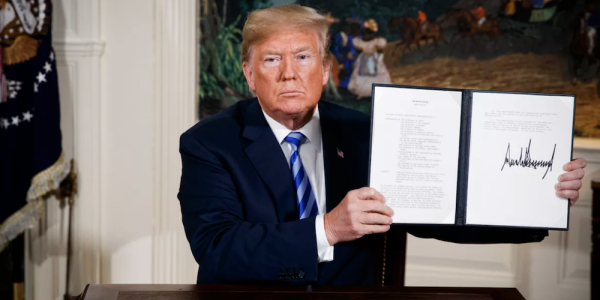 A coalition commander expressed confidence Tuesday that U.S. and partner forces in the Mideast are prepared for any provocations stemming from President Donald Trump's scrapping of the Iran nuclear deal.

The estimated 2,000 U.S. troops in Syria and 5,000 in Iraq have already been bolstered by the arrival in the eastern Mediterranean of the aircraft carrier Harry S. Truman, which began airstrikes May 3 against Islamic State targets in Syria.

In a video briefing from Baghdad to the Pentagon on Tuesday, British Army Maj. Gen. Felix Gedney said, “We've seen no change” in the dispositions of Syrian regime forces, or Iranian and Russian proxies, in the lead-up to Trump's announcement, but “we closely monitor all threats to our forces.”

“We retain our right to self-defense,” he said, and “we're confident that we'll retain the security of our forces operating in Iraq and Syria” against ISIS.

Gedney, deputy commander of strategy and support for Combined Joint Task Force-Operation Inherent Resolve, spoke hours before Trump announced at the White House that the U.S. was withdrawing from the Joint Comprehensive Plan of Action (JCPOA), which had been aimed primarily at reining in Iran's nuclear programs.

“This was a horrible, one-sided deal that should have never, ever been made,” the president said. “It didn't bring calm, it didn't bring peace, and it never will.”

Trump said it was impossible for the U.S. and its allies to prevent Iran from eventually developing nuclear weapons and the means to deliver them “under the decaying and rotten structure of the current deal. The Iran deal is defective at its core.”

Just before Trump spoke, French President Emmanuel Macron warned of upheaval in the region that could lead to war.

“We would open the Pandora's box. There could be war,” Macron told German weekly magazine Der Spiegel, adding that “I don't think that Donald Trump wants war.”

From its current station in the eastern Mediterranean, the carrier is serving two combatant commands. Its warplanes are striking from the 6th Fleet's area of operations and hitting targets in the area of operations of the 5th Fleet, which is headquartered in Bahrain, the Navy said in a statement.

It is unclear whether the Truman and its strike group will move later in the deployment closer to Iran in the 5th Fleet's area of operations.

Rear Adm. Gene Black, commander of the Truman's strike group, said the carrier is focused on combating ISIS but is prepared for other missions.

“We will continue to provide commanders the ability to respond and support national security priorities, and we remain prepared to deliver precision strike capabilities, as directed,” Black said in a Navy release.

At a White House briefing after Trump spoke, National Security Adviser John Bolton said that lifting sanctions against Iran under the 2015 JCPOA helped “fuel the activity that Iran is undertaking now in Syria, its support for terrorist groups all around the region and the world like Hezbollah and Hamas.”

“To really deal with this threat and try to bring peace and stability to the Middle East, and to relieve the world of the nuclear threat, you have to go after the whole thing,” Bolton said. “This is what [Trump] talked about with the European leaders and what we're going to try to pursue.”

One of the immediate concerns for the U.S. is that the Iranian-backed Hezbollah militias in Lebanon might respond by launching rockets into Israel.

To guard against the threat, the State Department issued a security warning Tuesday to American citizens in Israel to “consider carefully” their safety before traveling to the Golan Heights bordering Syria “until the situation stabilizes.”

The reaction in Congress to Trump's announcement broke down along partisan lines, with Republicans generally supporting the president and Democrats lining up against him.

However, Rep. Mac Thornberry, R-Texas, chairman of the House Armed Services Committee, had misgivings about the swiftness of Trump's action.

“I have no doubt that the JCPOA was flawed and that for years Iran has been deceptive about its nuclear and other programs,” Thornberry said, but “my preference would have been to give our European allies a few more months to strengthen the deal.”

The U.S. has no choice now but to “further enhance our own military capabilities” and “strengthen our alliances,” he said.

Former President Barack Obama said that withdrawing from the deal, which was the major foreign policy achievement of his administration, was “a serious mistake.”

“Without the JCPOA, the United States could eventually be left with a losing choice between a nuclear-armed Iran or another war in the Middle East,” Obama said in a statement.