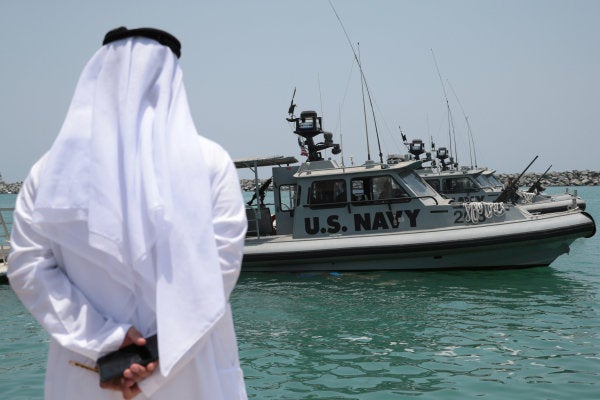 DUBAI/PARIS (Reuters) – The United States is struggling to win its allies' support for an initiative to heighten surveillance of vital Middle East oil shipping lanes because of fears it will increase tension with Iran, six sources familiar with the matter said.

Washington proposed on July 9 stepping up efforts to safeguard strategic waters off Iran and Yemen where it blames Iran and its proxies for tanker attacks. Iran denies the charges.

But with Washington's allies reluctant to commit new weaponry or fighting forces, a senior Pentagon official told Reuters on Thursday that the United States' aim was not to set up a military coalition but to shine a “flashlight” in the region to deter attacks on commercial shipping.

Because of fears of confrontation, any involvement by Washington's allies is likely be limited to naval personnel and equipment already in place – near the Strait of Hormuz in the Gulf and the Bab al-Mandab strait in the Red Sea, two Gulf sources and a British security source said.

“The Americans want to create an 'alliance of the willing' who confront future attacks,” a Western diplomat said. “Nobody wants to be on that confrontational course and part of a U.S. push against Iran.”

Addressing such concerns or possible misunderstandings, Kathryn Wheelbarger, one of the most senior policy officials at the Pentagon, told Reuters in an interview that the new initiative was “not about military confrontation.”

Under Washington's proposal, the United States would provide coordinating ships and lead surveillance efforts while allies would patrol nearby waters and escort commercial vessels with their nation's flags.

Iran has said foreign powers should leave securing shipping lanes to Tehran and other countries in the region.

France, which has a naval base in the United Arab Emirates, does not plan to escort ships and views the U.S. plan as counterproductive to easing tensions because Tehran would see it as anti-Iran, a French official said.

The British security source said it was not viable to escort every commercial vessel, a view shared by several other countries.

A senior Western official based in Beijing said there was “no way” China would join a maritime coalition. A South Korean official said Washington had yet to make any official request.

A decision by Japan to join such an initiative would be likely to inflame a divide in Japanese public opinion over sending troops abroad. Japan's military has not fought overseas since World War Two.

“The Americans have been talking to anyone interested about setting something up, mainly looking to Asia as it's of vital importance to their security of (oil) supply and asking for ships, but it's gone a bit quiet,” a Gulf official said.

India has deployed two ships in the Gulf to protect Indian-flagged vessels since June 20. Other Asian oil importers are unlikely to have anything but a symbolic presence, such as the involvement of a liaison officer, officials and diplomats said.

“It's just impossible. The Strait is already too crowded,” an Asian official said of an escort system in the Strait of Hormuz which is 21 miles (33 km) wide at its narrowest point.

Tensions rose further on Thursday after Iran's Revolutionary Guards said they had seized a foreign tanker smuggling fuel. A U.S. military commander in the region said the United States would work “aggressively” to ensure free passage of vessels in and around the Strait of Hormuz.

Tension has mounted since U.S. President Donald Trump last year quit a 2015 nuclear pact under which Iran agreed to curtail its atomic program in return for relief from economic sanctions crippling its economy.

France, Britain and Germany, which with Russia and China are party to the agreement, have tried to rescue the deal and defuse tensions.

Failure to secure support for the maritime initiative would be a blow to efforts by the United States, and its Sunni Muslim allies Saudi Arabia and the United Arab Emirates, to isolate Shi'ite Muslim Iran and Iran-backed forces in the Middle East.

Saudi Arabia and the UAE are already patrolling the coastline off Yemen where they are leading a coalition battling the Iran-aligned Houthi movement, though the UAE has said it is scaling down its presence there.

Asked what role Riyadh could play in the U.S. initiative, a Saudi military official said it would be the role that the Saudi-led coalition has been playing for the past few years in the Red Sea as part of the war in Yemen, including escorting and securing commercial shipping.

The United States does not want to go it alone.

“There are enough resources in the region now for the job at hand. The Americans want an international stamp on this effort,” one of the Gulf sources said. “They (the United States) also don't want to bear the financial burden.”

Technical and financial aspects, such as refueling, bunkering and maintenance costs, still need to be ironed out before countries sign up, the source said.

Policing burdens would largely fall on the United States, which has protected shipping lanes in the region for decades with its Bahrain-based Fifth Fleet. It also heads the Combined Maritime Forces, a 33-nation naval alliance that carries out security and counterpiracy operations in the region.

Britain has a base in Oman and China has a military base in Djibouti, which lies off the Bab al-Mandab strait. Beijing has had to tread softly in the region because it has close energy ties with both Iran and Saudi Arabia.

A U.S. State Department official, who asked not to be named, said Bahrain would host a working group meeting on maritime and aviation security in the autumn as part of a follow-up to a global conference in Warsaw in February that gathered some 60 nations to discuss stability in the Middle East.

Gulf states, which are big purchasers of Western arms, have invested more in air and land capabilities than in naval assets, and have little experience coordinating large naval missions.

The majority of vessels are small patrol craft and corvettes that would struggle on extended missions, said Tom Waldwyn, research associate for The Military Balance at the International Institute for Strategic Studies.

Wheelbarger, the U.S. Pentagon official, suggested small, quick ships would be helpful. She said several countries has expressed interest in the initiative but did not name them.

iran so far away
Strait of Hormuz