President Donald Trump said the U.S. will impose major new sanctions on Iran Monday, days after he abruptly called off a plan for airstrikes against the Islamic Republic based on the concept of proportionality after Iran shot down a U.S. Navy drone 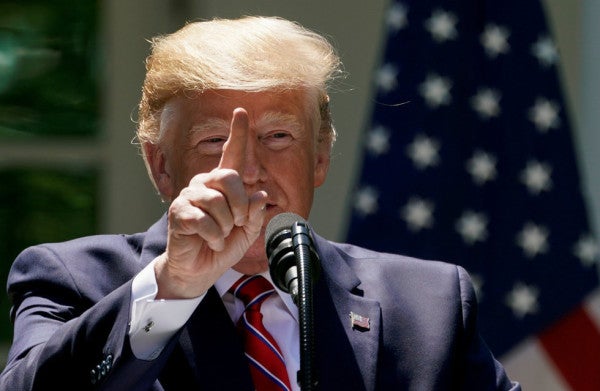 WASHINGTON — President Donald Trump said the U.S. will impose major new sanctions on Iran Monday, days after he abruptly called off a plan for airstrikes against the Islamic Republic based on the concept of proportionality after Iran shot down a U.S. Navy drone.

The sanctions move, announced on Twitter, came as Trump was at the Camp David in Maryland, presidential retreat for meetings and phone calls about Iran. The president foreshadowed the action earlier, in remarks to reporters at the White House.

The president told reporters he intended to impose additional economic sanctions, without offering specifics, and that military action is “always on the table until we get this solved” and that if Iran's leadership “behaves badly, it's going to be a very bad day for them.”

He also said that having the Strait of Hormuz open to shipping is less important to the U.S. because of its large domestic oil production, and benefits China, Japan, Indonesia and other countries much more.

“We'll see with Iran,” he said. “Everyone was saying I'm a warmonger and now they're saying I'm a dove.” Instead, Trump offered, he is “a man with common sense.”

“I don't want to kill 150 Iranians” unless it's absolutely necessary, said Trump, expressing a fondness for Iranian people he's known in New York. “Anything's a lot when they shoot down an unmanned drone,” in terms of casualties.

Trump also said that Iran “had a plane in their sights, 38 people on the plane and they didn't shoot it down. That was a very wise decision.”

That appeared to confirm a comment Friday by an Iranian Revolutionary Guard general that a manned U.S. spy plane was flying near the drone on Thursday but that Iran chose not to target it. The U.S. military's Central Command hadn't previously commented on the possible manned plane.

Trump praised General Joseph Dunford, who's set to retire in October as chairman of the Joint Chiefs of Staff. Dunford was against a military strike at this point, said Trump, who called him “a terrific man and a terrific general.”

Regarding some of his more hawkish advisers, including national security adviser John Bolton, Trump said that having people on both sides of the debate is important but “the only one that matters is me.”

Echoing the types of comments he's made about North Korea, Trump said he hoped he could “make Iran great again” over time. “Iran right now is an economic mess,” he said.