"It's been the closest emotional feeling to 1979 for me." 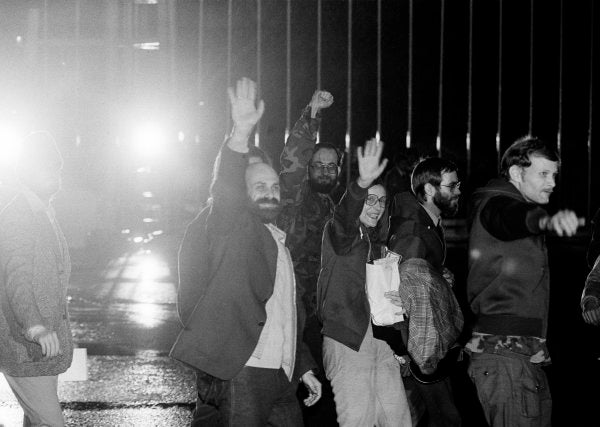 President Trump warned Iran on Saturday that if it retaliated against the U.S. for killing Gen. Qasem Soleimani — one of Iran's highest-level military figures — it would come to deeply regret it.

“Iran is talking very boldly about targeting certain USA assets as revenge,” Trump wrote. “Let this serve as a warning that if Iran strikes any Americans, or American assets, we have targeted 52 Iranian sites (representing the 52 American hostages taken by Iran many years ago).”

In making such bellicose threats, Trump has reopened deep-seated wounds from the Iranian hostage crisis of 1979-81.

Trump's tweet also amplified feelings of anxiety for many Iranian Americans who had already been struggling to understand what the rise in tensions mean for their loved ones back in Iran.

That's because for many in the diaspora, historical sites in Iran continue to represent a large part of their identity and remain a strong source of pride, helping to unite Iranians from all religious, social and political backgrounds.

Iranian Foreign Minister Mohammad Javad Zarif took to twitter to respond to Trump, pointing out that “targeting cultural sites is a war crime.” Some legal observers on social media also noted that under the Protocol I of the Geneva Conventions, the deliberate targeting of cultural sites is prohibited.

Even though four decades have passed since Iranian protesters stormed the U.S. Embassy in Tehran and took the Americans hostage, resulting in a 444-day ordeal, those wounds continue to haunt Americans. The crisis is viewed by many as a watershed moment that reshaped U.S.-Iran relations. The two countries cut off formal diplomatic relations in 1980.

“By raising the idea of targeting 52 cultural sites, it seems to me Trump wants to dig into the resentment that the American public has about the hostage crisis,” said Ali Akbar Mahdi, a sociology professor at Cal State Northridge. “The American public has not forgotten the trauma of that. It's always a reservoir that could be used for whatever political gain could be made from Iran.”

Indeed, for some survivors of the hostage crisis, the flaring of tensions and drumbeat of war in the days after the storming of the U.S. Embassy compound in Baghdad by pro-Iranian militia members and their supporters have stirred emotions in ways that they said they haven't experienced in many years.

“The moment I heard it happened I couldn't help but flash back to what happened to us,” said Mark J. Lijek, one of six Americans who managed to evade capture and take refuge at the Canadian Embassy.

Still, not all surviving members of the hostage crisis agree that the U.S. stands to benefit from Trump's assassination of Soleimani, the commander of the elite Quds Force, which carries out the foreign operations of the Islamic Revolutionary Guard Corps, melding intelligence work with a military strategy of nurturing proxy forces across the world.

“Soleimani has already been replaced,” Daugherty said. “I'm not sure killing him will have any positive result.”

Tensions between Iran and the U.S. have been rising since Trump withdrew the U.S. from the landmark 2015 nuclear deal. Those tensions increased after a dangerous tit-for-tat between the U.S. and Iran in recent months, eventually culminating in the U.S. airstrike last week that killed Soleimanii.

Mahdi, the sociology professor, said although Soleimani's death does not necessarily cripple Iran's ability to cultivate its proxy groups across the Middle East, the general was the highest-level target that the U.S. had struck since the establishment of the Islamic Republic. As such, the killing represents a significant intensification of the worsening relationship between Iran and the United States. It could also lead Iran to intensify its efforts to develop nuclear weapons.

Indeed, the reverberations of Soleimani's death have swept the nation: Iranians are in the midst of three days of national mourning, and red flags have been raised throughout the country, a symbolic gesture meant to unify the country's most pious Shiites to fight back against the U.S.

Those in the U.S. who have arguably been burdened most by the weight of recent events are Iranian Americans and survivors of the hostage crisis.

“I won't even get into how the last three days have invited the tired accusations of dual loyalties and assimilationist demands to be trotted out, or how statements about threats in our communities have renewed anxieties about not just belonging, but also personal safety,” said Amy Malek, a sociocultural anthropologist specializing in the Iranian diaspora, on Twitter.

For Lijek, the images from Baghdad of pro-Iranian militia fighters and their supporters storming the walls of the U.S. Embassy compound and setting a guardhouse on fire reminded him of the fateful morning of Nov. 4, 1979, when, as a 29-year-old foreign service officer, he watched Iranian protesters storm the 27-acre compound that surrounded the U.S. Embassy in Tehran.

“It put me back in that mind-set … especially the first couple hours when you don't know what's happening.”

“Part of me says: You don't miss a chance to get someone like him,” he said of the general.

Barry Rosen, who was a 23-year-old press attache at the time the U.S. Embassy in Tehran was overrun by protesters, said the recent events have felt like an emotional roller coaster.

“It's been the closest emotional feeling to 1979 for me given the fact that Iraq is so influenced by Iran,” Rosen said.

Now 75, Rosen was at home in New York City watching NBC with his wife, Barbara, when he saw images of protesters attacking the U.S. Embassy in Iraq. “I told my wife, 'Not again,'” he said. When he heard of Soleimani's death, his attention turned to current American prisoners detained in Iran.

“I fear that now the American prisoners will not be freed for a long while,” he said.

Daughterty hopes Americans will interpret events that have unfolded over the last week with nuance.

“A huge number of Iranians seem to want to reengage with West,” he said. “It is an educated nation.”