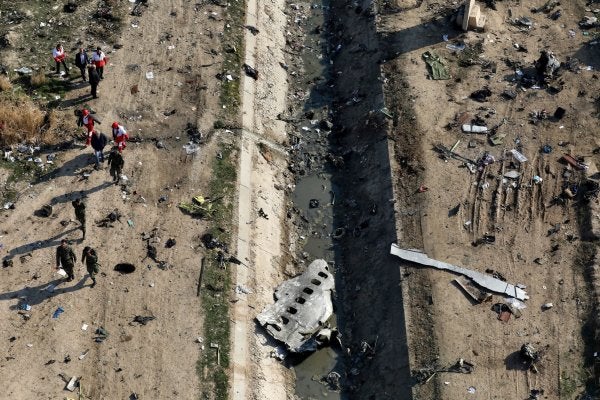 Ukraine International Airlines Flight 752, carrying 176 people, crashed in Iran on January 8. Everyone on board was killed in the crash.

The cause of the crash, Iran's government initially reported, was unknown. Iran's Revolutionary Guard Corps — a military division that answers directly to the country's supreme leader — suggested a potential mechanical failure on the Boeing 737 plane involved.

But days later, following claims from multiple foreign governments suggesting the plane was shot down, Iran admitted its mistake: A Revolutionary Guards soldier, on high alert in the wake of the U.S.-ordered drone strike on Iranian military commander Qasem Soleimani, accidentally fired two anti-aircraft missiles at the passenger flight.

That's according to a new piece in the New York Times on Sunday, which reports that Iran's Revolutionary Guards knew it had made the mistake immediately after the missiles were fired.

Debris at the scene where a Ukrainian plane crashed in Shahedshahr southwest of the capital Tehran, Iran — the crash of a Ukrainian jetliner near Tehran that killed all 176 on board. (Associated Press photo)

Gen. Amir Ali Hajizadeh, leader of the Revolutionary Guards aerospace division, was told of the news soon after. “I called the officials and told them this has happened and it's highly possible we hit our own plane,” he said in a televised statement.

What followed, according to the NYT report, was an attempt by Iran's Revolutionary Guards to keep the news hidden — even from Iranian president Hassan Rouhani.

Rather than reporting to President Rouhani, Iran's Revolutionary Guards report directly to Iran's supreme leader, Ayatollah Ali Khamenei. As such, General Hajizadeh and other Revolutionary Guards generals reportedly didn't tell the Iranian president or military what they knew to be the likely truth: That Iran had accidentally fired two anti-aircraft missiles at a passenger jet, and that jet had crashed due to those missiles.

As Iran publicly denied involvement in shooting down the plane, a committee was reportedly put together to investigate. Participants “were sequestered and ordered not to speak to anyone,” according to the NYT report.

A vigil for victims of Ukraine International Airlines flight 752 outside Tehran's Amri Kabir University, where some of the passengers were students. (Associated Press/Ebrahim Noroozi)

By the evening of January 8, the same day the crash occurred, that committee was reportedly ready to declare that Iran had fired two rockets at the plane by mistake — but Iran's Revolutionary Guards apparently weren't ready to tell Iran's president or other branches of government just yet.

According to the generals involved, Iran initially denied involvement in the crash due to national security concerns. If they admitted fault immediately, it could've introduced doubt into Iran's air defense operators, they argue.

“If we had said this, our air defense system would have become crippled and our guys would have had doubted everything,” Gen. Hajizadeh said.

Following days of outright denials by Iranian public officials, Iran's president Hassan Rouhani reportedly found out the truth on Friday, January 10. He reportedly pushed for a swift announcement of the news, which was said to be met with pushback from military leaders. It reportedly took Rouhani threatening resignation for the issue to be resolved.

“Armed Forces' internal investigation has concluded that regrettably missiles fired due to human error caused the horrific crash of the Ukrainian plane and death of 176 innocent people,” President Rouhani tweeted. “Investigations continue to identify and prosecute this great tragedy and unforgivable mistake.”

Read the full report from The New York Times here