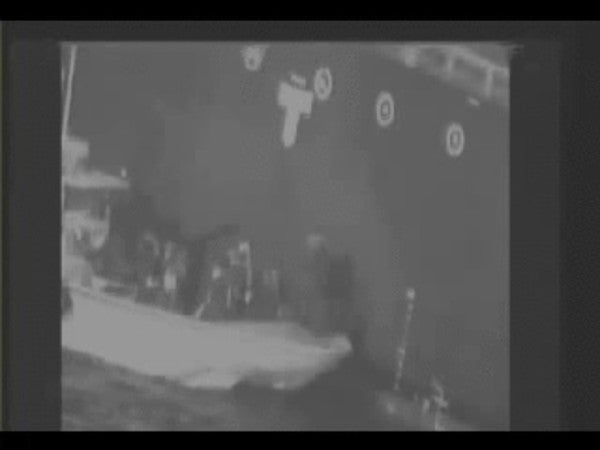 On May 16, 2019, U.S. officials cited reports that Iran had installed missiles on civilian motorboats in the Persian Gulf as a justification for a major deployment of U.S. military forces to the Middle East.

However, this claim may ring a bit strangely to observers of Iran's military, as employing swarms of heavily armed motor boats to launch asymmetric attacks on maritime assets has long been understood to be its naval strategy — one that Tehran hasn't exactly been shy about publicizing.

Take, for example,
this video which depicts a swarm of rocket-armed boats unleashing a hail of rockets upon a giant mockup of a U.S. aircraft carrier in the Persian Gulf.

Besides the rocket-armed motor boats, note also the presence of anti-ship ballistic missiles (detailed in
this article) and other assets that could be cued to hit naval targets.

In another ironic incident, a U.S. military diagram explaining Iranian tactics was founded and adopted by Iranian media to advertise its military strength (and was then breathlessly reported in the U.S. as a “new” Iranian threat.)

The U.S. Navy even
designed its Littoral Combat Ships with countering Iranian fast boats in mind—to its current regret as it re-orient to “great power” conflict.

Both civil and military shipping in the Persian Gulf is exceptionally vulnerable to mines, cruise missiles and fast boat attacks because its shallow straits force large ships to squeeze through predictable lines of transit.

Iran is unusual for having
two navies. The older, Artesh (“regular”) Iranian Navy focuses on operating larger corvettes, frigates and missile boats, as well as over two-dozen submarines. Its area of operations is chiefly further afield in the Straits of Hormuz, the Gulf of Oman and the Indian Ocean. Its twenty-two Ghadir-class midget submarines, however, are well suited to ambush warfare in the shallow and rocky waters of the Persian Gulf.

Meanwhile, the quasi-military Iranian Revolutionary Guard Corps
also has its own Navy, counting over 1,500 fast boats designed to rapid swarming attacks in the shallow littoral waters of the Persian Gulf. Effectively answerable to religious hardliners rather than the head-of-state, the IRCGN has been involved in more provocative diplomatic incidents, such as the seizure of a U.S. Navy fast assault boat in January 2016.

In terms of 'civilian boats,' the IRGCN musters hundreds of fast-in-short boats are on the pattern of the open-cabin 'Boston Whaler' motorboat, typically fitted with unguided rocket launchers, rocket-propelled grenades, anti-tank missiles and recoilless rifles. Other popular platforms include Swedish Boghammar motorboats and rigid-hull Zodiac inflatable rubber dinghies. These small watercraft can be based on isolated islands and oil platforms in the middle of the Persian Gulf.

However, Iran also is manufacturing specialized military speed boats with more impressive capabilities. One example is the
Seraj-1, reverse-engineered from a British Bladerunner 51 speed boat purchased from South Africa. Photos reveal these have been armed with a multiple-rocket-launcher system and a heavy anti-aircraft machine gun on the prow. The Seraj can reportedly attain speeds of 55 to 72 knots.

Members of Iran's elite Revolutionary Guard show their skills in attacking a naval vessel during military exercises in the Gulf on April 22, 2010
(AFP/Getty Images/Fars News/Mehdi Marizad)

The sleek, domestically-designed Zolfaghar (video
here) has a maximum speed of 70 knots and mounts an integrated radar and two launch canisters for Nasr-1 cruise missiles on its stern. Based on the Chinese C704 missile, the Nasr-1 has a range of 22 miles, and can use infrared, radar or television guidance. Iranian media has also released images revealing the boat's simple cockpit and computer displays, and an apparent mass-production line for the boats.

Even more exotic watercraft includes
semi-submersible boats designed to partially submerge below the water to evade detection for sabotage, special-forces insertion and spying.

If the
Mad Max-style tactics of barreling towards enemies at maximum speed in swarms of over-gunned open-topped motor vehicles seems outlandish, it has a certain logic for Iran. The small and affordable boats have low radar signatures, which combined with speed, would significantly reduce their target's reaction time. More importantly, their sheer numbers could overwhelm the expensive defensive systems onboard U.S. warships—if necessary, by running them dry of ammunition.

Van Riper apparently hadn't understood that he was meant to lose the wargame in order to validate U.S. military doctrine, so the exercise was promptly rebooted to have the 'right' outcome.

Although one can only extrapolate so much from a lone wargame, Van Riper's tactics also illustrate that motorboat swarms would only be employed as a component in a larger strategy that would likely involve long-range land-based cruise missiles, ship and drone-based reconnaissance assets to cue those missiles onto target, midget submarine attacks and naval mines.

Iran's vast stock of over three thousand naval mines, for example, could gravely impede access to the Gulf, and could be deployed via small
Ashora-class boats, submarines, corvettes, helicopters and so forth. Domestic Iranian drones or Iran's bizarre ground-effect hovercraft could spy on the position of enemy ships and transmit targeting coordinates to land-based missiles. Iran has imported Chinese C802 Silkworm missiles with a strike range of 120 miles, as well as reverse-engineered its own domestic Noor cruise missile, and begun working on a 200-mile range Ghadir ASCM. And the Persian Gulf ranges in width only between 35 to 212 miles.

It's worth concluding by observing that Iran's naval strategy is one of a military underdog seeking to deter stronger opponents. Tehran wants its enemies to fear that a Western war with Iran would result in extensive damage to the tankers carrying one-third of the world's oil across the Straits of Hormuz, and for the U.S. Navy to think twice whenever it deploys aircraft carriers into the Persian Gulf.

From the IRGCN's standpoint, the U.S. Navy's advanced warships bristling with missiles are the Death Star, and its swarms of fast boats the plucky, maneuverable fighters capable overwhelming advanced defenses to deal a lethal blow.

Whether fast boat swarms could adequately leverage the narrow littoral waters of the Persian Gulf and prove effective versus modern warships has never truly been combat-tested—and hopefully, never will be.