Iraq is sliding into chaos as massive protests spread nationwide

The elite counter-terrorism service was also deployed to Baghdad airport where its men fired live ammunition and tear gas at protesters, preventing them from storming Baghdad airport. 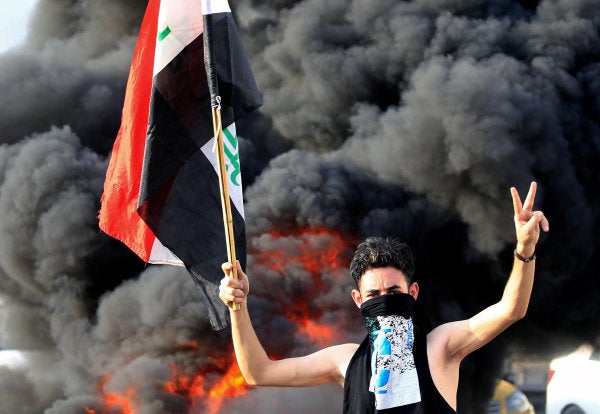 BAGHDAD (Reuters) – Iraq deployed counter-terrorism troops in the southern city of Nassiriya on Wednesday after police “lost control” when gunfights broke out between protesters and security forces, police sources said.

Curfews were later imposed in Nassiriya and two other southern cities, Amara and Hilla, the police sources told Reuters, as protests that began on Tuesday over unemployment, corruption and poor public services increased.

The elite counter-terrorism service was also deployed to Baghdad airport where its men fired live ammunition and tear gas at protesters, preventing them from storming Baghdad airport.

A demonstrator throws a tear gas canister used by Iraqi security forces as others disperse during a protest over unemployment, corruption and poor public services, in Baghdad

Demands on Wednesday included the “fall of the regime” and government and political party buildings set ablaze in two other southern provinces.

Five people were killed on Wednesday and more than 200 were wounded in renewed clashes nationwide, the largest display of public anger against Prime Minister Adel Abdul Mahdi's year-old government. Two were killed on Tuesday.

Domestic instability coupled with regional tensions could prove to be the final nail in the coffin of Abdul Mahdi's fragile coalition government, sworn in last year as a compromise between rival factions after an inconclusive election.

The slogan “fall of the regime” was popularized during the 2011 Arab Spring uprisings.

Demonstrators disperse as Iraqi security forces use tear gas during a protest over unemployment, corruption and poor public services, in Baghdad

“We are demanding a change, we want the downfall of the whole government,” said one protester in Baghdad who declined to identify himself for fear of reprisal.

Any power vacuum in Iraq, should the government be toppled, could prove challenging for the region, given Baghdad's status as an ally of both the United States and Iran, who are locked in a political standoff.

Islamic State militants could also take advantage of any chaos and thousands of U.S. troops are stationed in the country in positions not far from those of Iran-allied Shi'ite militias.

The death toll includes two protesters killed in Nassiriya on Wednesday. An Interior Ministry spokesman said the dead also included a child killed when a protester threw a gasoline-filled bottle at a vehicle carrying civilians in Baghdad, and a protester killed in Amara.

Demonstrators block the road with burning tires during a protest over unemployment, corruption and poor public services, in Baghdad

Police and the army opened fire and launched tear gas canisters to disperse hundreds of protesters in Baghdad. Protesters blocked the main highway connecting the capital to Iraq's northern provinces.

“Our demands? We want work, we want to work. If they do not want to treat us as Iraqis, then tell us we are not Iraqi and we will find other nationalities and migrate to other countries,” said one protester in Baghdad.

But worst hit was southern Iraq, the heartland of the Shi'ite Muslim majority who, after years of voting along sectarian lines, are turning on their political leaders for failing to deliver jobs and basic services.

Protesters burned down government buildings in Nassiriya, Amara and the Shi'ite holy city of Najaf. In Kut, protesters tried to break into the municipality building. Hundreds were out on the streets of Hilla and Diwaniya.

Small protests also took place in the northern cities of Kirkuk and Tikrit, as well as the eastern province of Diyala.

Internet access was cut off across much of Iraq, internet blockage observatory NetBlocks said.

A demonstrator shows empty canisters that were used by Iraqi security forces during a protest over unemployment, corruption and poor public services, in Baghdad

Abdul Mahdi on Wednesday chaired an emergency meeting of the national security council, which issued a statement regretting deaths and injuries on both sides.

“The council affirms the right to protest, freedom of expression, and the protesters' legitimate demands, but at the same time condemns the acts of vandalism that accompanied the protests,” it said.

All military units were placed on high alert, the defense ministry said.

Security forces blocked several roads in Baghdad, including a bridge that leads to the fortified Green Zone, which houses government buildings and foreign embassies.

In an attempt to cool tempers, Abdul Mahdi on Tuesday promised jobs for graduates. He instructed the oil ministry and other government bodies to include a 50% quota for local workers in subsequent contracts with foreign companies.

Oil-producing Iraq has suffered hardships for decades, from rule by Saddam Hussein including years subject to U.N. sanctions, to the 2003 U.S. invasion and civil war it unleashed, and then the battle against Islamic State, which was declared won in 2017.

Corruption is widespread and basic services such as power and water are lacking.

The government said on Tuesday that 40 members of the security forces were hurt and at least 11 more were injured on Wednesday.