A Wounded Iraq War Vet Created A Sculpture. The VA Says It’s Too Real To Display 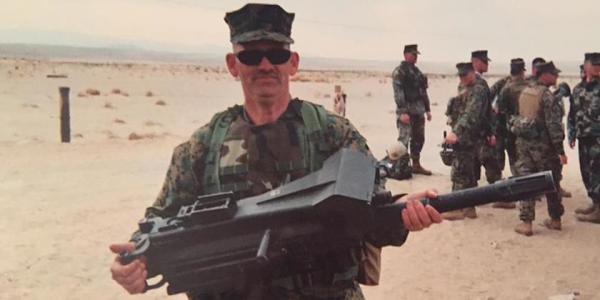 Marine veteran Bill DeRoche had been encouraged for years to enter an art competition at the Minneapolis Veterans Affairs Medical Center. Injured in a 2004 bomb blast that struck his convoy in Iraq, it would be a way, he was told, to publicly address the trauma that continues to affect him.

But the VA balked when it got a look at photos of the sculpture DeRoche planned to enter. It includes four 155 mm shells connected by wires, a representation of the improvised explosive devices or IEDs often used in the kind of blast that injured him. The shells in the artwork, DeRoche was told, were a risk to public safety and a threat to a vulnerable population.

Although the shells are inert, the VA wants them removed. DeRoche has refused, saying it would ruin the message of the work.

The standoff means DeRoche’s work is banned from next month’s competition.

The sculpture in questionFacebook / William Deroche

“I did a lot of reading and hearing over the years about the IED stuff,” he said. “I felt I could sit down and put myself into this artwork. But now they are telling me no. I’m totally baffled. What if I did the best oil painting ever but it had injured people in it so that is going to offend somebody? I’m at a loss.”

It is only the second time in 30 years of the art competition that an entry has been rejected, the VA said.

The Minneapolis Veterans Creative Arts Competition features several categories, including sculpture. Besides restrictions on the size of the art and when it needed to be submitted, there are few rules about the content, except that a veteran must be enrolled at the Minneapolis VA at the time the art piece is entered.

The purpose of the competition, which generates 100 to 150 submissions a year, is “to recognize veterans for their creative accomplishments and to educate and demonstrate to our community the therapeutic benefits of the arts,” according to a pamphlet the VA distributed about the event.

The 57-year-old DeRoche would hardly fit the portrait of the radical artist sticking it to the man. DeRoche would even struggle with anyone describing him as an artist, although he did construct a large cross in his Shoreview backyard after his first wife died of cancer.

He has had careers in the military and in public safety. Even as a family man well into his 40s, he re-enlisted in the Marines following the terrorist attacks on 9/11 because he thought the fighting shouldn’t be done only by the young.

DeRoche was injured in Iraq when the pickup he was riding in went under a bridge and was struck by an IED. Shrapnel hit the front of the truck and those in back were struck with what is known as an “acoustic blast.” He was knocked unconscious and later had trouble walking and began suffering from ear pain, spotted vision and memory loss.

The base of the sculpture, featuring the representations of IEDs the VA deemed “too real.”Facebook / William Deroche

He was treated for more than three months at a military hospital in Bethesda, Md., before returning home to Minnesota, where the effects of the trauma persisted, making it nearly impossible for him to find permanent work.

DeRoche has been classified as 100 percent disabled by the VA, including a 100 percent rating for traumatic brain injury, or TBI, the signature wound of troops in the wars in Iraq and Afghanistan. His injury now largely defines his life and he struggles with the limitations it imposes on him.

Doctors and counselors at the VA had encouraged him to enter the art competition for several years as a way of addressing the trauma. He decided to participate this year, creating an assemblage sculpture that showed his feelings about the darkness of war and the light that helped him survive his experience and suffering. He said he wanted the work also to bring hope to other veterans and to allow others to see the paradoxes of war.

“To look at that and get an idea of what the people that served, what they went through,” DeRoche said.

The sculpture has the four 155 mm casings, wired together inside a wooden crate, with two fake skulls, a deck of cards, his dog tags, and various symbolic medals and coins. A flickering light bulb projects up from the box. It is meant to show the light that helped him through his darkness. After obtaining the materials on the internet, it took him about a month to assemble the piece.

“Everything in his mind with that sculpture has a meaning to it,” said his wife, Jodi. “I just loved going through the process with him. He’d tell me why this was the way he wanted to depict it. I kept asking him, ‘Who’s your audience and what’s your purpose?’?”

Once completed, DeRoche decided to give the VA a heads-up that the sculpture was constructed of materials that made it ominous looking. The VA asked for a picture. Then a VA representative warned him that VA police had decided that the shells would represent a safety risk.

“My reply was, ‘Why would the police have any say about what’s in artwork?’?” DeRoche said. “Wipe it. Touch it. Have the dogs sniff it. I’ll take it completely apart. But they said no.”

A Minneapolis VA spokesman said that VA policy and federal regulations prohibit weapons on campus, even though the shells are inert. The VA also consulted with three psychologists who said the art could cause distress to other veterans because the sight of the shells create a “triggering event” to a vulnerable population.

The VA has suggested substituting the shells with papier-mâché versions or a photograph. DeRoche said the shells are at the heart of his message.

Admitting that it has little experience with this situation, a VA representative told him in an e-mail that the agency is considering changing the rules of its competition to spell out more clearly the kind of artwork it won’t allow.

But the head of a St. Paul nonprofit that provides art therapy for veterans and their families said DeRoche’s work is the kind of art the VA should embrace rather than reject.

“I think it is vital for civilians to listen to our veterans and military families,” said Bridget Cronin, executive director of Ars Bellum. “Art is a powerful way to communicate those experiences. Art can heal. Art can provoke discussion and change. It should not be censored or suppressed.”

Cronin said Ars Bellum has shown a number of provocative pieces over the years, including works done by women who have suffered military sexual trauma. After being shown a picture of the sculpture, she volunteered to show DeRoche’s work in a future exhibit.

Meanwhile, submissions at the VA are being accepted through the end of January and the artwork will be exhibited Feb. 14-16. A panel of local community members will judge the work, and all local winners will go on to a national competition, with winners invited to attend a national creative arts festival in Des Moines this fall.

The VA said it would be willing to work with DeRoche to resubmit his entry if he agrees to make the changes.

DeRoche said he won’t be backing down.

“Everything I went through, there was a speed bump,” DeRoche said. “Now I feel like I’m being crapped on again.”