U.S. Rep. K. Mark Takai died Wednesday morning in Honolulu, nine months after he was diagnosed with pancreatic cancer. A... 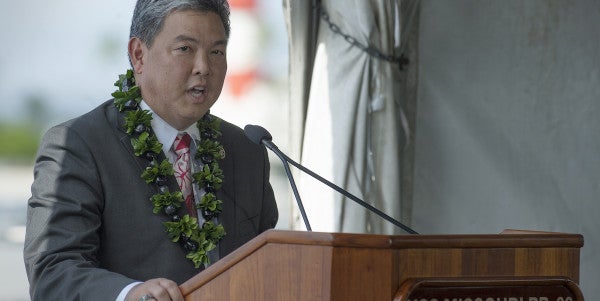 U.S. Rep. K. Mark Takai died Wednesday morning in Honolulu, nine months after he was diagnosed with pancreatic cancer. A statement from his office said Takai passed away at his home, surrounded by his family. He was 49.

“The Takai family thanks the people of Hawaii for their support during this difficult time,” the statement said. “The Takai family politely asks for the continued respect of their family’s privacy.”

In a statement from the White House, President Barack Obama said, “Mark was always a fighter. It’s the spirit he brought to more than two decades of public service on behalf of the people of Hawaii. He stood up for America’s most vulnerable. He championed our troops and veterans, and proudly wore our nation’s uniform. And his relentless push for cancer research inspired countless Americans fighting the same battle as him. Simply put, our country is better off because of Mark’s contributions.”

Gov. David Ige issued a statement lauding Takai’s public service and expressing condolences. “Today, the people of Hawaii mourn the passing of U.S. Rep. Mark Takai,” he said. “He proudly served his country in uniform, including 17 years with the Hawaii Army National Guard. Mark humbly and effectively served the people of his state House and Congressional districts. In the often tumultuous world of politics, he has been a shining example of what it means to be a public servant.

“While we will deeply feel the loss of Mark Takai in the public arena, we cannot forget that he was a family man first. His wife, children and extended family will miss him every moment from this day on. Dawn and I extend our deepest sympathies to Sami, Matthew and Kaila. Your husband and father was a man of principle and goodwill. Thank you for sharing him with the citizens of Hawaii.”

Born on Oahu on July 1, 1967, Takai was an Iraq War veteran who deployed in 2009, and was a lieutenant colonel in the Hawaii Army National Guard. He worked for the Guard as a preventive medical officer.

The Democrat served in the state Legislature for 20 years before winning election in 2014 to the U.S. House seat that was vacated by former Rep. Colleen Hanabusa, who ran unsuccessfully for Senate.

Takai publicly confirmed last November he had been diagnosed with cancer, and he underwent surgery at the National Institutes of Health in Bethesda, Md., to remove a small tumor in his pancreas.

Takai said doctors found the tumor in late October while testing him to determine why he had been experiencing some stomach pain. Takai said the cancer was caught early, and tests showed that the tumor was “isolated.”

“I am in good spirits and thankful that my prognosis remains good thanks to the early detection,” he said at the time. “My family and I have been overwhelmed by the outpouring of love, support and prayers. We ask for your continued prayers, support and respect for our privacy during this challenging time.”

Takai returned to Congress on a limited work schedule in early December after undergoing surgery, and began chemotherapy at Johns Hopkins Hospital in Baltimore.

“The diagnosis really brings things quickly into focus,” Takai said in a statement after his surgery. “It reminds me of what’s important, and for me that’s faith, family and fighting for Hawaii.”

He announced on Feb. 17 that he would seek re-election to a second term in Congress, saying he hoped to campaign and “aggressively fight this cancer” at the same time.

He announced he had changed those plans and would not run for re-election in an announcement on May 19 after he learned the cancer had spread.

“In life, we often make plans for ourselves,” Takai said in his statement at the time. “I had envisioned a long career in the U.S. House of Representatives, building up the seniority and influence that were key to Sen. (Daniel) Inouye’s ability to deliver for Hawaii. But as often happens, we find ourselves on a different journey than what we had planned.”

Takai said that “putting Hawaii and its people first means that I must regretfully withdraw from my 2016 re-election race for Congress and suspend my campaign. Right now, for the sake of my family, I need to focus on getting better rather than getting re-elected.”

As word of his death today spread, condolences from colleagues came from around the island and the nation.

U.S House Speaker Paul Ryan said, “I am saddened by the passing of our colleague, Mark Takai. He was an exemplary soldier, public servant and beloved member of the House of Representatives. His love for Hawaii and the people he represented was evident every day.”

U.S. Rep. Nancy Pelosi spoke of Takai’s fight against cancer, saying, “All of us were moved when he announced his cancer to Vice President (Joe) Biden and the Members at the House Democrats’ Issues Conference earlier this year. Mark confronted his diagnosis with the spirit we all hope we would share when facing such an awful disease. As we mourn the loss of our friend, we draw fresh resolve to find cures.”

Fellow Hawaii Democrat U.S. Sen. Mazie K. Hirono, said she “affectionately called Mark my younger brother. We shared so many of the same values and supported each other during challenging times. Mark’s passing is a tremendous loss for all of us who loved him, and for the state of Hawaii. But he said it best: ‘As often happens, we find ourselves on a different journey than we had planned.’ While we find that our journey is not as bright without Mark, we will continue his work to make Hawaii a better place.”

“This is the deepest of losses and one that I feel very personally because of my friendship with Mark,” said U.S. Sen. Brian Schatz, D-Hawaii. “Throughout his life, he was all about serving the people of Hawaii. He gave so much, and had so much more yet to give.”

U.S. Rep. Tulsi Gabbard, who served with Takai in the House, said, “I’m grateful to have known and worked with Mark for over a decade. … Mark’s smiling face and ready laugh will truly be missed, but the impact that he made through his life of service to the people of Hawaii will always be remembered.”

Ige’s office was researching next steps to determine how a replacement would be named, spokeswoman Jodi Leong said. The Hawaii Office of Elections will likely hold an election in November for a replacement to serve the remainder of Takai’s term, which would have ended in January, said spokeswoman Nedielyn Bueno.

The City Council’s Budget Committee was in session at Honolulu Hale at about 9:15 a.m. when word broke of Takai’s passing.

The usually stoic Budget Chairwoman Ann Kobayashi stopped her meeting, and through tears, asked for a moment of silence. “I know our thoughts and prayers are with his family,” she said, her voice shaking.

Attempting to proceed with her committee agenda with an item involving a sale of wastewater system revenue bonds, Kobayashi said “OK, we have to go on with business.” But she had to pause to compose herself before continuing.

Mayor Kirk Caldwell said in a statement, “I was lucky to have worked with Mark in the State House and the commitment and dedication he had for his country, his state and Hawaii’s many diverse communities was obvious to all. Whether on deployment with the Hawaii Army National Guard, debating national security issues in Congress, or simply providing a helping hand for various community projects, Mark served with vigor and energy, and his presence and sound reasoning will be sorely missed.”

Hanabusa, who is running to replace Takai and return to her former seat in Congress, said today, “We have lost a great public servant who dedicated his life to making Hawaii and our nation a better place. We will miss him dearly.”

Takai was a graduate of Pearl City High School and the University of Hawaii, where he was a champion swimmer, editor of Ka Leo, the campus newspaper, and president of the Associated Students of the UH.

He is survived by his wife Sami Takai, their children Matthew, 14, and Kaila, 13, and parents Erik and Naomi. Services are pending.