Iraq Will Be Removed From Trump’s Travel Ban List, And We Have A Few Good Men To Thank

Iraq is expected to be removed from President Donald Trump’s travel ban list in a new executive order — and... 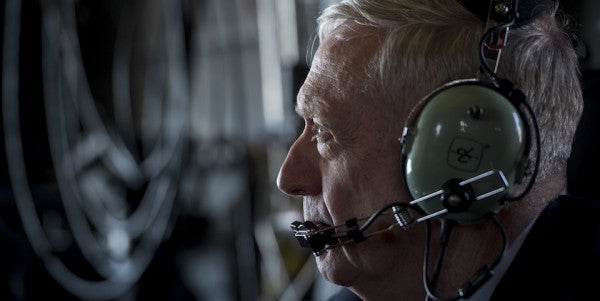 Iraq is expected to be removed from President Donald Trump’s travel ban list in a new executive order — and for reasons that should’ve been perfectly obvious to the administration when the list was drafted in the first place.

According to the Associated Press, the decision was made following pressure from the Pentagon and State Department, while CNN reports that it was Secretary of State Rex Tillerson, Secretary of Defense James Mattis, and national security adviser Lt. Gen. H.R. McMaster who, in fact, advocated for Iraq to be removed from the list. Why would they pressure the White House to do such a thing? Because, for one, we currently have American troops fighting alongside Iraqis on the front lines in the war against ISIS. That the authors of the ban only took that into account after a federal court ruling forced them to recalculate their strategy raises the troubling prospect that there are people within the Trump administration who needed to be reminded that we’re still at war.

Among the most vocal critics of the original executive order were some veterans of the Iraq War, who implored the administration to make an exception for the Iraqi interpreters who have aided U.S. forces since the 2003 invasion. In a New York Times op-ed, Task & Purpose CEO and former Marine Zach Iscol, who earned a Bronze Star with Valor in the Second Battle of Fallujah, argued that Trump’s order would be “keeping out the very Muslims we do want here.”

James Mattis is sworn in as the 26th secretary of defense in a ceremony presided over by President Donald J. Trump and Vice President Mike Pence at the Pentagon in Washington, D.C., Jan. 27, 2017.DOD photo by U.S. Air Force Staff Sgt. Jette Carr

Meanwhile, in Iraq, where 5,000 American troops are currently deployed in the fight against ISIS, members of the Iraqi parliament responded by voting in favor of a reciprocal ban, with the hope of, as one MP put it, encouraging “the new American administration to review this wrong decision.” Iraqi Prime Minister Haider al-Abadi rejected the proposal, but in his first phone call with Trump, he reminded the president that Iraq and the United States are close battlefield allies and asked for his country to be removed the list. Whether this was news to the commander-in-chief, who once claimed to “know more about ISIS than the generals do,” is unclear.

Abadi’s request has now been honored, signaling that either the Trump administration no longer perceives Iraqi refugees as a threat to U.S. national security, or that it finally realized that Iraq’s inclusion on the list would only hinder efforts to degrade and destroy one of the most formidable terrorist organizations in the world.

Central to the U.S. military’s strategy in Iraq is forging strong relationships with the local population, including both soldiers and civilians. That’s pretty much been the case since day one. When former and current military commanders raised concerns that the ban would put the lives of American service members in jeopardy, they weren’t just being whiny or “politically correct.” They were speaking from years of experience on the ground, where U.S. forces have relied, and continue to rely, on Iraqis for everything from intelligence gathering, to coordinating raids and airstrikes, to basic security. Soon after Trump signed the executive order, Iraqi soldiers fighting alongside American special operations forces in Mosul told The New York Times that they interpreted the ban as an insult.

“[The Iraqis have] invited us into their country to help them,” Lt. Gen. Stephen Townsend, the top U.S. commander in Iraq, told reporters on March 1. “They are protecting us here and we’re fighting this enemy that threatens all of our countries together. So I would prefer personally not to see anything that would reflect on that except that we have a very strong partnership.”

Iraq is just as much of a hotbed of terrorism than any of the other countries on the list. Recent fighting in the former ISIS strongholds of Fallujah and Ramadi has scattered hundreds of thousands of displaced Iraqis to the wind. The battle to retake Mosul, which is still raging, is displacing countless more. There’s no doubt that ISIS militants are among them, and that many have now absorbed back into the civilian population. Does that mean our country will be any less safe with Iraq not on the list?

Well, if the Bowling Green Massacre is the only example we have of Iraqi refugees carrying out a terrorist attack on U.S. soil, chances are we’ll be fine. In fact, the Trump administration’s changes to the immigration order come on the heels of a report by Homeland Security Department intelligence analysts that, according to the AP, “found insufficient evidence that citizens of the seven Muslim-majority countries posed a terror threat to the United States.”

…if the Bowling Green Massacre is the only example we have of Iraqi refugees carrying out a terrorist attack on U.S. soil, chances are we’ll be fine.

But, hey, you never know where the terrorists are going to come from. The Boston Marathon bombing was carried out by two Chechen-Americans. The San Bernardino attack was perpetrated by the American-born son of a Pakistani immigrant and a woman who was born in Pakistan and lived in Saudi Arabia before moving to the United States. Omar Mateen, who shot 49 people to death in an Orlando nightclub, was born in Queens, New York, and grew up in Florida. His parents were Afghans.

Senior Airman Henry Nokes, 386th Expeditionary Security Forces Squadron Fly-Away Security Team member, secures a section of airfield outside a C-130 Hercules at an undisclosed location in Southwest Asia, Feb. 4, 2017. Nokes was responsible for securing a flank of the aircraft while Airmen with the 737th Expeditionary Airlift Squadron delivered thousands of pounds in supplies to aid in the fight against the Islamic State of Iraq and the Levant and Mosul offensive.Air Force photo by Senior Airman Jordan Castelan

It’s easy to justify putting Iraq on the list. In fact, in 2011, the year President Barack Obama withdrew all American troops from Iraq, the government temporarily introduced stricter screening procedures for Iraqi refugees applying for U.S. visas after two Iraqis living in Bowling Green, Kentucky, were arrested on terrorism charges (hence the Bowling Green Massacre). But it’s just as easy to justify including other countries where global jihadist networks have taken root, such as Pakistan, Afghanistan, Saudi Arabia, and Egypt.

This led me to suspect that the refugee ban, as it was originally conceived, was intended more as a symbolic gesture than an earnest attempt to keep us, the American people, safe. The fact that Iraq is now being removed from the list only confirms that suspicion. In their rush to follow through with one of Trump’s key campaign promises, the authors of the ban failed to heed the wisdom accrued by both the Pentagon and the State Department over more than 15 years of war, and the result was an executive order that was perilously out of touch with reality. Now, the federal court order has allowed enough time for some of that wisdom to seep into the White House.

Why wasn’t it there in the first place? Maybe it’s because the two chief architects of the original ban, 31-year-old top Trump advisor Stephen Miller, and Stephen Bannon, the former CEO of Breitbart who now serves as the White House chief strategist, overestimate their knowledge of foreign policy. Or maybe it’s because they’re more focused on signaling to the world that the Trump administration will be tough on terrorism than they are on doing what’s actually necessary to prevent an attack on American soil, which requires working in concert with the military commanders and State Department officials whose primary mission is to do just that.

Had the federal courts not overturned the original ban, we’d now have a policy in place that would’ve made the difficult mission of driving ISIS out of Mosul, the Islamic State’s de facto capital outside of Syria, more difficult. So far, countless Iraqi soldiers have been killed or wounded trying to retake the city. American soldiers are right there with them. Fortunately, the generals in the Trump administration didn’t forget that, and made sure their voices were — eventually — heard.