An icon of special operations and a man who at one time was the Army’s most battle-tested officer has died.... 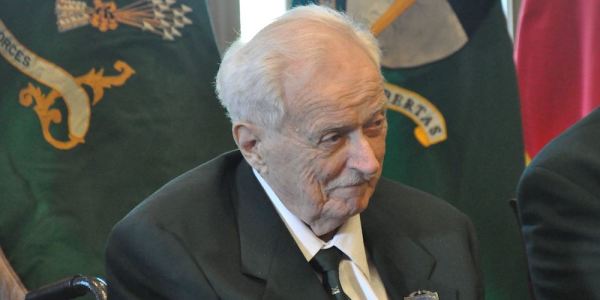 An icon of special operations and a man who at one time was the Army’s most battle-tested officer has died.

Maj. Gen. Michael D. Healy, 91, died Saturday in Jacksonville, Florida, according to officials. The general served in the military for 35 years, spending much of his career at Fort Bragg.

When he retired in 1981, Maj. Gen. Healy was the nation’s most senior Special Forces soldier. He was a veteran of wars in Korea and Vietnam, with his service in the latter spanning a decade and ending with him overseeing the withdrawal of troops from the country. And he was the inspiration for John Wayne’s character, “Col. Iron Mike Kirby,” in the 1968 film “The Green Berets.”

“Maj. Gen. Mike Healy is a true Special Forces legend, not only for his actions during war, but for his leadership and vision during a pivotal time in the Regiment's history,” said Maj. Gen. Kurt L. Sonntag. “As the commander of the U.S. Army John F. Kennedy Special Warfare Center and School, then called the U.S. Army John F. Kennedy Center for Military Assistance, he streamlined training, and aligned it to deal with modern threats. During his tenure, he solidified the role and value of Army Special Operations to the Army and the Nation.”

“We owe a debt of gratitude to him for his vision, leadership, and for the professionalism he brought to the force,” Maj. Gen. Sonntag added. “His passing is truly a loss that we all feel, and we're keeping his loved ones are in our thoughts.”

Maj. Gen. Healy is survived by his wife of 67 years, Jacklyn, and their sons Michael Jr., Daniel, Timothy, Sean, Kirk and Patrick. He also has 10 grandchildren and eight great-grandchildren.

His son, Sean, told the Florida Times-Union that he enjoyed hearing others speak of his father.

“I would talk to people, and especially if they brought something up about the military, I would ask them if they had heard of Iron Mike,” Mr. Sean Healy said. “If they knew who that was I would let them go on for a while, and then I would say ‘that’s my dad.’”

“He was one of the first Americans to go into Vietnam and one of the last to leave,” he said.

“He just did some amazing things,” he said. “He was just an icon in Special Forces. Everyone knew who he was and he was just a presence — you knew you were talking to somebody who was somebody.”

Maj. Gen. Healy earned the nickname “Iron Mike” while serving as a young officer leading Army Rangers on combat patrols deep behind enemy lines in Korea in the early 1950s.

According to the SWCS, then-Lt. Healy was commander of the 4th Airborne Ranger Company during an airborne operation at Munsan-Ni in South Korea. When a platoon under his command was pinned down and under heavy fire, he and four others weaved their way through trenches to hold the high ground until reinforcements arrived.

The monicker would follow Maj. Gen. Healy throughout his career, including during five tours — nearly eight years in all — in Vietnam.

“I asked him once how he got the Iron Mike nickname,” Bruce Pastorini, a Jacksonville, Florida, resident who got to know Maj. Gen. Healy in his later years, told the Times-Union. “It was his stamina that he was able to take heavy loads and help other guys with their loads. He was that kind of soldier. It didn’t come from an iron will or anything like that, it came from his stamina and his willingness to help others.”

According to SWCS, Maj. Gen. Healy was “known by his men for his loyalty, compassion and love, as much for his tenacity in war.”

Maj. Gen. Healy was a native of Chicago who enlisted in the Army at the age of 19 at the end of World War II.

He served with the 1st Cavalry Division in Japan before taking command of the 4th Airborne Ranger Company as a lieutenant.

After serving with the company in Korea, Maj. Gen. Healy attended several military schools before being recruited to serve as chief of the Special Warfare Operations and Foreign Intelligence Branch for the Office of the Assistant Chief of Staff for Intelligence.

Maj. Gen. Healy served the first of five tours in Vietnam in 1963 as a Special Forces major, serving as operations officer and senior advisor to Vietnamese special forces, building a force of mobile guerilla battalions that fought alongside American troops.

Two years later, Maj. Gen. Healy delayed his attendance at the U.S. Army War College to lead the battalion back to Vietnam.

In 1967, Maj. Gen. Healy returned to the states for the War College. He would return to Vietnam two years later as commander of special troops and assistant chief of staff, G1, for the 24th Corps and later served as commander of the 1st Brigade, 9th Infantry Division in the Mekong Delta.

Three weeks after leading the brigade back home from Vietnam, Maj. Gen. Healy — then an Army colonel — was recalled to Vietnam for his fourth tour in the country. He assumed command of the 5th Special Forces Group, which he would lead for 20 months before redeploying in 1971.

Upon returning to Fort Bragg, Maj. Gen. Healy was promoted to brigadier general and assigned as the assistant division commander of the 82nd Airborne Division.

His fifth and final tour in Vietnam came in 1972, when then-Brig. Gen. Healy served as commanding general of the 2nd Regional Assistance Command, Military Region Two as U.S. forces prepared to withdraw from the war.

For his efforts, SWCS officials honored Maj. Gen. Healy as a Distinguished Member of the Special Forces Regiment near his home in Jacksonville in 2015.

“He not only ensured the continued sustainment of Special Forces, Psychological Operations and Civil Affairs, but also increased its value,” SWCS officials said in 2015. “Furthermore, he raised morale and competencies of the soldiers, cadre and students.”

Following his command at SWCS, Maj. Gen. Healy served as Chief of Staff of Combined Military Planning in Ankara, Turkey, leading all joint maneuvers in the Middle East. He ended his Army career in 1981 as commander of the Army Readiness Region V at Fort Sheridan, Illinois.

That year, Maj. Gen. Healy noted that Fort Sheridan was the same installation where he had enlisted as a private 35 years earlier.

Looking back on his career, he thanked his family and the soldiers he served alongside.

“My wife and family have been tremendously supportive of me. That’s No. 1,” he told the Associated Press. “Next is the comradery provided me by the American soldier. I just acted functionally — like I was trained to perform.”

During the interview, Maj. Gen. Healy said his only regret was that he couldn't start all over again.

“I would like to walk in the back gate at Fort Sheridan like I first did and say, ‘Yes, sir, I’ll go.’ But today, I’m in civilian clothes. My uniform is packed away,” he said.

“I’m no hero,” the general added. “I’m just a very fortunate and lucky officer who has had the privilege to take care of that ultimate weapon, the American soldier.”

Officials said Maj. Gen. Healy will be buried at Arlington National Cemetery in the coming months. It was his desire to be buried near his mentor, the late Gen. Creighton Abrams.