During a discussion at the Aspen Security Forum on July 21, Army Gen. Raymond Thomas, head of U.S. Special Operations... 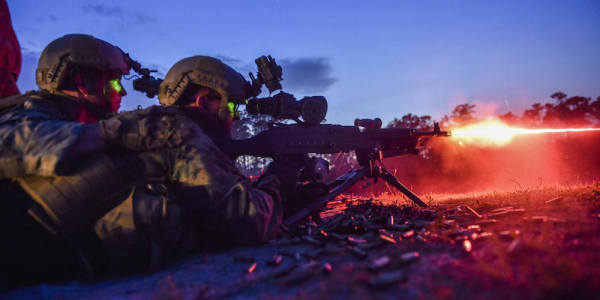 During a discussion at the Aspen Security Forum on July 21, Army Gen. Raymond Thomas, head of U.S. Special Operations Command, cited estimates saying that the U.S.-led fight against ISIS had killed 60,000 to 70,000 ISIS militants.

It is not the first time U.S. military officials have given estimates for ISIS body counts — Thomas himself cited a similar number in February — but those estimates have been made despite doubts among military leaders and government policymakers about their accuracy and usefulness.

When asked about the whereabouts of ISIS leader Abu Bakr al-Baghdadi, Thomas downplayed the ISIS leader's influence and said that while Baghdadi's fate is currently unknown, “we will get him eventually.”

To underline his point, Thomas elaborated on the damage done to ISIS' personnel network.

“I mean, everyone who worked for him initially is dead or gone. Everybody who stepped to the plate the next time, dead or gone,” Thomas said. “Down through a network where we have killed in conservative estimates 60,000 to 70,000 of his followers, his army. They declared an army, they put it on the battlefield, and we went to war with it.”Those comments come several months after Thomas claimed that more than 60,000 ISIS fighters had been killed since the campaign against the group started in summer 2014.

Those comments come several months after Thomas claimed that more than 60,000 ISIS fighters had been killed since the campaign against the group started in summer 2014.

“I'm not into morbid body counts, but that matters,” he said in February, speaking at the National Defense Industrial Association's Special Operations/Low Intensity Conflict conference. “So when folks ask, do you need more aggressive , do you need better , I would tell you that we're being pretty darn prolific.”

Body counts — which earned scorn during the Vietnam War — are considered a dubious metric by which to measure the success of a military campaign, particularly ones against groups like ISIS. It is typically hard to estimate how many fighters such groups have, and it is not always clear how many have been killed during military engagements.

The February number given by Thomas was not much higher than the 50,000 ISIS-dead estimate made by U.S. officials in December. But the December number given by US officials was twice as high as the figure cited by UK Defense Minister Michael Fallon that same month.

And the figure cited by Thomas on Friday was only slightly higher than what he said in February, despite the increased intensity of anti-ISIS operations in Iraq and Syria in the intervening months.

But those air operations appear to have caused a considerable increase in civilian deaths.

The U.S. government reversed its policy on body counts several times during the wars in Iraq and Afghanistan, and numbers given by the government have been undercut or criticized by civilian and military personnel alike.

“My policy has always been, don't release that kind of thing,” Chuck Hagel, who served as secretary of defense from 2013 to 2015, told CNN in December 2016. “Body counts, I mean, come on, did we learn anything from Vietnam?”