When the Syrian town of Khan Sheikhoun was hit this month by poison gas, the attack was condemned internationally and... 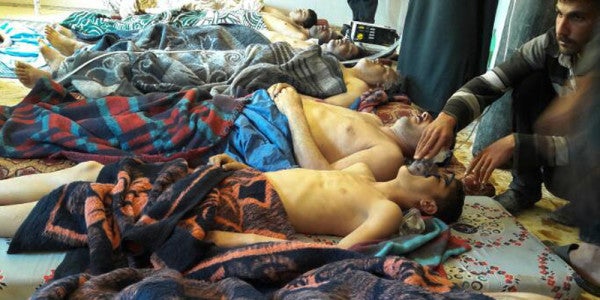 When the Syrian town of Khan Sheikhoun was hit this month by poison gas, the attack was condemned internationally and prompted the Trump administration to launch a retaliatory missile strike.

Last Friday, there was another attack. A rocket loaded with chlorine gas struck the neighborhood of Abar in the Iraqi city of Mosul, injuring several soldiers. Iraqi military officials said it was launched by Islamic State.

There is growing evidence that deadly chemical agents are becoming part of Islamic State’s arsenal.

Islamic State has used chemical weapons, including chlorine and sulfur, at least 52 times in Syria and Iraq, according to a study released in November by IHS Conflict Monitor, a London-based intelligence collection and analysis service.

The Organization for the Prohibition of Chemical Weapons said it confirmed that Islamic State fighters had deployed sulfur mustard, commonly known as mustard gas, in an attack on the Syrian town of Marea, near Aleppo, in August 2015. The internationally banned substance burns a victim’s skin, throat and eyes.

“In this case, the team was able to confirm with utmost confidence that at least two people were exposed to sulfur mustard, and that it is very likely that the effects of this chemical weapon resulted in the death of an infant,” the organization said in a statement.

There have been other cases.

On March 4, a dozen civilians from east Mosul were treated for suspected exposure to a blistering chemical agent after several rocket attacks by Islamic State, according to an Iraqi military official. The patients were transferred to a hospital in Irbil for treatment of symptoms of a chemical attack including blisters, burns, respiratory problems, irritation to the eyes and vomiting, the official said.

In northern Iraq, Islamic State fired mortar rounds loaded with sulfur mustard at Kurdish forces in October 2015, the Organization for the Prohibition of Chemical Weapons said.

“There has been no question of where those mustard agents came from,” said Jerry Smith, former operations chief for the organization.

Chemical weapons such as chlorine gas, mustard gas and sarin are banned by most nations. They are especially difficult to defend against without protective gear, which is mostly absent on the battlefields of Iraq and Syria.

The attacks officials blame on Islamic State and other forces have not resulted in the death and destruction associated with the chemical attacks attributed to the Syrian government.

The attack this month in the rebel-held town of Khan Sheikhoun killed 86 people. The government of President Bashar Assad has denied responsibility and blamed opposition forces. It has also suggested the poison gas was inadvertently released during an airstrike on a rebel-held munitions depot.

In 2013, the U.S. and Syrian opposition groups accused forces loyal to Assad of lobbing sarin-filled shells at rebel-held enclaves near Damascus. According to U.S. estimates, more than 1,000 people were killed.

As a result, under a deal pushed by Russia, the Syrian government surrendered stockpiles of chemical weapons to the United Nations.

More than 95 percent of the government’s arsenal was eliminated, according to the Organization for the Prohibition of Chemical Weapons. But the group also said there have been chemical attacks since then by rebel and government forces.

Chlorine is commercially available as an industrial chemical and has been used by bomb makers in Iraq for years. But it was unclear how Islamic State obtained sulfur mustard.

The U.S.-led coalition has targeted Islamic State munitions depots and weapon-manufacturing sites with airstrikes in Iraq and Syria.

“We’ve long known that the enemy has aspired to use chemical weapons,” U.S. Air Force Col. John Dorrian, a Baghdad-based coalition spokesman, said at a briefing in February. “Mustard agent is one that they’ve used many times.”

Dorrian called militants’ capability to make chemical weapons “rudimentary,” but he emphasized that it was “very important that we continue to roll back their control of territory because this is not something that we want to wait and let (Islamic State) get good at.”

Smith thought it unlikely that militants had stockpiled large quantities of chemical weapons.

“If ISIS had manufactured these weapons, I’m sure we would have seen them used by now, with half of Mosul gone,” he said, using an acronym for the militant group.

The chemical weapons could have been seized from industrial or Syrian government stockpiles, he and other experts said.

Islamic State doesn’t have the capacity to manufacture the more lethal nerve agents like sarin, Kimball said, but it could attack and seize whatever Syrian authorities refused to turn over.

“There has been a deep concern that the Syrian stockpile might fall into the wrong hands,” he said. “We now have to be focused on removing whatever nerve agents in Syria still exist.”

Assad was to hand over Syria’s chemical weapons to Smith’s monitoring group to be destroyed four years ago. Smith said that his team removed weapons the government declared, but that “it was on a bit of a trust basis.”

The U.N. has since found that Syrian military helicopters dropped bombs containing chlorine on civilians in at least two attacks in the past three years.