22 dead, including some children, in an explosion at Ariana Grande concert in Manchester, England. 8-year-old reportedly among those who have... 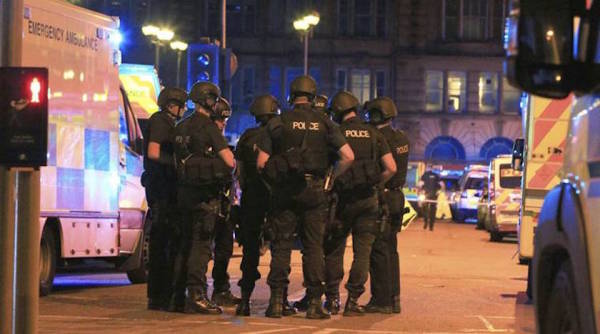 At least 22 people died, some of those children, and 59 others were injured in an explosion at Manchester Arena on Monday evening in what police are treating as a terrorist attack.

The first victim has been named as 18-year-old Georgina Callander and the Telegraph reports that 8-year-old Saffie Rose Roussos also died of her injuries following the attack.

Terrorist group ISIS (also known as Islamic State, Daesh, and ISIL) claimed responsibility for the attack at 12:45 p.m. BST on Tuesday, via a news agency linked to them, Amaq, according to the Press Association:

The explosion occurred around 10:30 p.m. local time (BST) at an Ariana Grande concert. Chief constable Ian Hopkins from Manchester police says the attacker was a lone man “carrying an improvised explosive device, which he detonated causing this atrocity.”

The police confirmed on Tuesday that the attacker died in the explosion. They are estill stablishing whether “he was acting alone or as part of a network.”

Hopkins said investigations are continuing to establish if he was part of a network and there is a detailed forensic search of the area. “We would ask people not to speculate on his details or to share names,” Hopkins said. “There is a complex and wide-ranging investigation under way.”

At 11:50 a.m. local time, the Press Association said Greater Manchester police said that a 23-year-old man was arrested in connection with the attack:

In a separate operation, armed police officers raided flats near the Chorlton area of Manchester around lunchtime, the Guardian reports. The suspect is understood to have lived in a flat raided by police, the paper reports.

The Guardian quotes the owner of the management company that runs the flats as saying:

“All the people are living here are families. I can’t believe that. I did not know them personally but have a good number coming from outside the UK, like students, but we don’t have any people living on their own. It is not good news.

“We have students from Saudi Arabia, Iraq and Libya and then families from Manchester. They are two-bed flats. They are from every race.”

The chief constable has appealed to the public to upload any pictures of videos to this service, so it would help the police with its investigation.

Hopkins did not name the victims but The Evening Standard named Georgina Callander, 18, as one of the 22 people killed. Friends today said she was one of the first people rushed to hospital after the attack.

Just after 11 a.m. local time, Prime Minister Theresa May has condemend what she called a “callous terrorist attack” at the Manchester Arena following a meeting of the government's emergency Cobra committee. She said the police think they have identified the attacker but are not at this point will not reveal the name.

Shortly after May spoke, the Arndale Shopping Centre in central Manchester was evacuated.

Prior to this, Greater Manchester Mayor Andy Burnham told journalists just before 11 a.m. local time that an “extremist” was responsible for the attack but did not elaborate further:

Greater Manchester mayor Andy Burnham just came and spoke to journalists at police HQ. He said “an extremist” was responsible for the attack