‘Defeated’ in Syria, ISIS is mounting a bloody comeback in Iraq 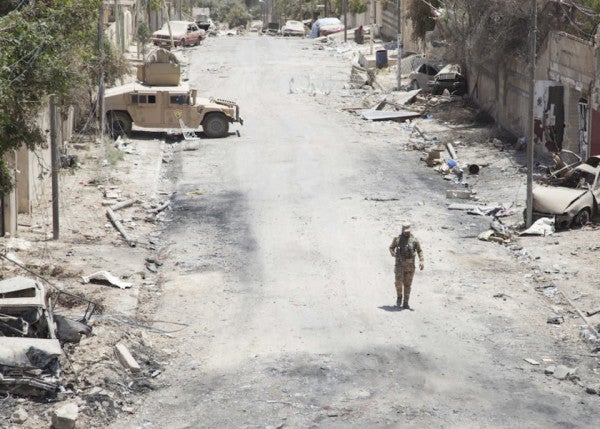 MOSUL, Iraq — It was after dark Wednesday when three buses pulled out of Mosul and headed southeast on a desolate desert road. The passengers were government-backed paramilitary fighters.

The city lights were well behind them when the convoy came under attack. By the time the shooting stopped, six paramilitary members were dead and 31 wounded.

The attack, one of the deadliest since Iraq declared military victory over the extremist group in December 2017, was the clearest sign yet that the war isn't over.

It has merely shifted to a new phase: Islamic State is trying to mount a comeback, and the Iraqi military is trying to root out sympathizers and sleeper cells still embedded in the extensive territory the group once controlled.

By many accounts, the government is failing to contain a budding insurgency, the sort of resilient, underground enemy that has outlived governments around the world.

Stripped of its territory — which once encompassed a third of both Iraq and Syria — Islamic State has reverted to its roots, using small, self-contained teams of operatives to conduct small-scale attacks and assassinations and rebuild its smuggling and ransom operations.

“We're not talking about the networks they used to have. Now it's cells of five or six people,” said Shamkhi Mansour, a colonel in the intelligence branch of Iraq's Counter-Terrorism Service.

Iraqi military officials, security experts and the U.S. government said that Iraq has failed to develop the extensive intelligence network that would offer the best chance of rooting out the militants.

“We had a victory in that we kicked out Daesh from cities, but we've failed in pursuing them in the rural areas and ferreting them out,” said Hisham Hashimi, a counterterrorism adviser to the government, using a derisive Arabic acronym for Islamic State.

Instead, Iraqi forces have resorted to rounding up large numbers of Sunnis and holding sham trials of Islamic State suspects, a strategy that costs the Shiite-dominated government vital support and could increase support for the extremists.

According to activists and security personnel, tens of thousands of people across the country have been wrongly accused of supporting Islamic State because their names are similar to those of wanted militants.

There has also been little allowance made for the many people who supported the extremists less out of ideological conviction than out of fear for their lives.

Iraqis caught in the dragnet can languish for months in crowded jails while police visit their neighborhoods to investigate. In many cases, according to three security officers, the police extort bribes to clear people of wrongdoing.

Iraq is all too familiar with the dangers of this strategy.

Nouri al-Maliki, a Shiite Muslim who served as Iraq's prime minister from 2006 to 2014, used it against Islamic State.

At the time, the group was operating clandestinely, forging links in rural areas with Sunni leaders sympathetic to its cause, attempting to lay the groundwork for a massive takeover.

Hoping to stomp out any support, al-Maliki transformed security services into death squads that oppressed Sunni-dominated areas. His approach backfired.

In mid-2014, when Islamic State militants began seizing Iraqi territory and building a caliphate, many Sunnis welcomed them as liberators.

Many Iraqis insist that history is unlikely to repeat itself.

In former Islamic State strongholds such as Mosul, the second-largest city in Iraq, it's difficult to find anybody who speaks favorably about the group.

“Even those who were considered good people and who joined the group — now people speak of them badly,” he said. “It's become a black spot on someone's character.”

But he and others said the government was not spending enough funds to cultivate new sources.

In one case described by a security expert who asked not to be identified because of the sensitivity of the subject, the Iraqi government nearly missed the chance to cultivate a high-level defector from Islamic State. The U.S.-led coalition in the region finally stepped in and paid $2 million for his cooperation.

Another problem is that with seven intelligence services operating in the country, all working with no clear jurisdiction, there is a greater chance of important information getting lost.

A Mosul-based special forces colonel who spoke on the condition that he not be named blamed the issue on a lack of trust among the security services.

“In America they combined databases and increased coordination over two buildings falling,” he said, referring to the Sept. 11, 2001, terrorist attacks.

“We haven't done this over whole cities falling.”

Perhaps most worrisome, Islamic State has started operating more openly in rural areas southwest of Mosul, including Hatra, the Hamrin Mountains and the deserts of Anbar.

“We should be having military operations in those remote regions, but there aren't even reconnaissance flights,” said Mansour, the colonel.

The problem is set to become worse. With Islamic State losing its final bastions in Syria, Iraq has already taken back tens of thousands of its own citizens who had joined the militants.

More are expected to return, including many children steeped in Islamic State's murderous ideology and forced to take up arms in its “Cubs of the Caliphate” program.

SEE ALSO: ISIS Is Reportedly Biding Its Time Ahead Of A Bloody Iraqi Comeback

WATCH NEXT: Soldiers Pound ISIS Fighters from Iraq Fire Base