An ISIS convoy of buses and other vehicles has been stuck in the middle of the desert between Syria and... 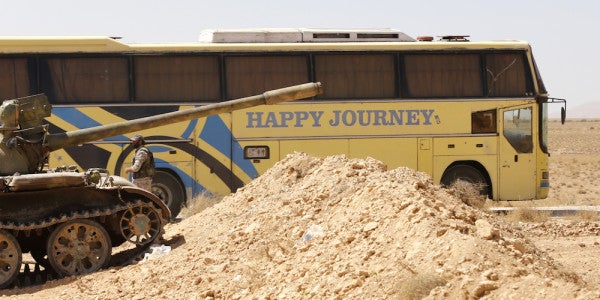 An ISIS convoy of buses and other vehicles has been stuck in the middle of the desert between Syria and Iraq for more than week, fearing U.S. airstrikes if they move.

In a statement released on Sept. 4, U.S. Central Command said the convoy of 11 buses has been sitting in the same spot east of As Sukhnah, after U.S. airstrikes took out a bridge and cratered the road ahead of the convoy last week.

The buses, loaded with about 300 fighters and 300 family members, were headed to Iraq after ISIS brokered a safe-passage deal with Lebanese Hezbollah, The New York Times reported.

The U.S.-led coalition, however, does not recognize that agreement as valid, since it was not a party to the deal. The coalition said in a statement that it will not “allow these experienced fighters to transit territory under Syrian regime control to the Iraqi border.”

Buses lined up near the Syria-Lebanon border on Monday to take 308 Islamic State fighters and their families to Islamic State-controlled territory.Photo via AFP/Getty Images

“The Coalition has been clear, that in support of our Iraqi partners, we will not allow the movement of ISIS fighters near the border or onto sovereign Iraqi soil,” the statement said.

CENTCOM said it has not directly struck the ISIS convoy and has allowed food and water to be brought to passengers. Meanwhile, of the original convoy of 17, six have been allowed to turn back toward Palmyra without incident.

The statement said the coalition had suggested, through contact with Russia, that the Syrian regime evacuate women and children from the convoy.

“The Syrian regime is letting women and children suffer in the desert,” said Lt. Gen. Stephen J. Townsend, commander of the Combined Joint Task Force – Operation Inherent Resolve, in a statement. “This situation is completely on them.”