ISIS offers tips on how to avoid getting coronavirus 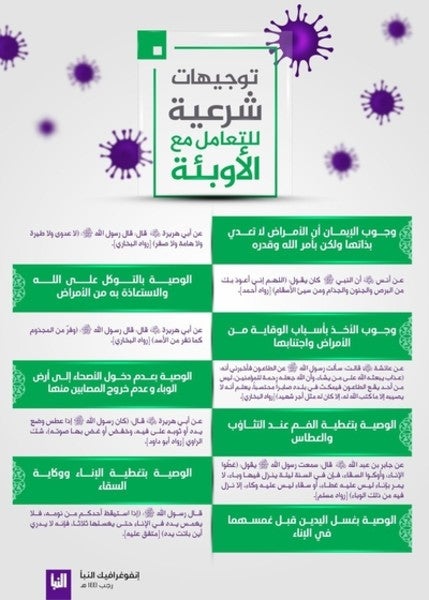 As the novel coronavirus (COVID-19) continues to spread worldwide, ISIS has told its fighters that they should run away from sick people as if they were running away from a lion, according to its latest al-Naba newsletter.

“Oh God I seek refuge in You from leprosy, madness, and from the malaise of illnesses,” said the newsletter, translated by Aymen Jawad Al-Tamini, which provides a list of “directives to deal with epidemics.”

Although the newsletter urged ISIS fighters to ultimately seek refuge in God, the tips include:

issuing correction on a previous post of mine, regarding the terror group ISIL. you do not, under any circumstances, "gotta hand it to them"

Admittedly, at least some of the tips aren't completely off base — washing your hands and covering your mouth are common sense, though the Centers for Disease Control and World Health Organization have offered better guidance to people on how to protect themselves from coronavirus.

More specifically, the CDC recommends washing your hands often with soap and water for at least 20 seconds, or to use hand sanitizer that contains at least 60% alcohol. People should also avoid touching their face with unwashed hands, avoid close contact with people who are sick, and put some distance between themselves and others if coronavirus is spreading in their community.

The novel coronavirus, or COVID-19, has spread to more than 120 countries since it was first detected in Wuhan, China earlier this year.

There have been nearly 132,000 cases reported and nearly 5,000 deaths from the virus worldwide, according to The World Health Organization, which declared a pandemic on March 11.

“In the days and weeks ahead, we expect to see the number of cases, the number of deaths, and the number of affected countries climb even higher,” said Dr. Tedros Adhanom Ghebreyesus, WHO director-general. “We’re in this together, to do the right things with calm and protect the citizens of the world. It’s doable.”

Iran has been among the countries most affected by the virus' spread, with more than 10,000 cases reported. Its neighbor Iraq has so far had 70 reported cases.

The release of a new ISIS newsletter comes days after two Marine special operators were killed in a heavy gun battle with the militant group about 40 miles southwest of Erbil, Iraq.

Although ISIS lost its leader, Abu Bakr al-Baghdadi, to an American special operations raid in October, and has lost much of its territorial “caliphate,” the group has reconstituted its ranks in recent months, and has carried out low-level attacks and has maintained its freedom of movement in rural areas where there is less presence of Iraqi security forces.

“ISIS retains enough manpower and planning capabilities to conduct regular small-scale attacks or ambushes against ISF, the PMF, or local civilians accused of aiding the ISF or informing on ISIS activities,” U.S. military officials reported to the inspector general.