The ISIS ‘caliphate’ is all but finished, but its online presence endures

Islamic State's media arm endures on a smaller scale, and has already adapted to the loss. 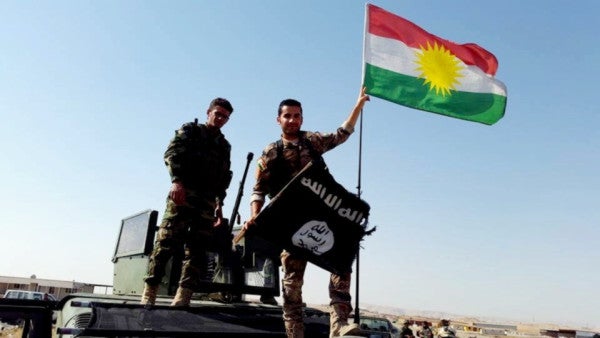 When President Trump spoke of Islamic State last week, he described the group as all but defeated, even in the digital realm.

As Islamic State's once-large physical domain shrinks to nothing, its media presence is no longer the mighty propaganda powerhouse that, at its height, flooded social media with nearly 40 statements, videos and other media items a day, according to a 2015 report by the International Center for the Study of Radicalization and Political Violence, a London think tank.

At the same time, Islamic State's media arm endures on a smaller scale, and has already adapted to the loss.

The radical ideology it uses to push its fighters and supporters to fight to the death also continues to drive its media operations.

That doctrine made “media jihad equal to if not greater than military jihad,” said Adam Raisman, a senior analyst at the U.S.-based SITE Intelligence Group, a monitor of extremist content online, adding that the group paid media personnel the same wage it gave to fighters on the battlefield.

“Islamic State did more to court audiences. It was the first to branch out on social media. It named those who promoted its caliphate and ideology on social media as 'mujahideen,'” or holy warriors, Raisman said. “No other group courted support like that.”

In an August 2015 publication titled “You are a Mujahid, O Media Man,” released by Al Himmah Library, an official operation of the group, Islamic State declared that “the power of words is sharper (stronger) than atomic bombs.”

“Inciting jihad,” said the publication, was equal to “waging jihad.”

“So my dear unknown media soldier, know how valuable your role is in attaining victory…. You are a mujahid for the cause of Allah.”

Just like its strategy in combat, which includes a mix of assaults by its own fighters along with terrorist attacks undertaken by sympathizers across the globe, Islamic State's media effort has had a mix of soldiers and adherents with no official capacity who are willing to spread its message.

“It's both highly centralized in its official media arms and also highly decentralized for its grass-roots supporters and unofficial media,” said Seamus Hughes, a terrorism researcher at George Washington University, in a phone interview Wednesday. “In times of distress, the unofficial media plays a larger role while the official media takes a somewhat limited presence but still attempts to steer the ship.”

As the group's fighters are beaten back, the sheer volume of its media output has markedly declined.

Between August 2015 and December 2018, the average number of Islamic State's media offerings, which includes statements, songs and videos, fell from roughly 300 per month to less than 100, according to U.S. officials involved in the cyber element of Operation Inherent Resolve, the U.S.-led coalition's campaign against Islamic State.

“Our efforts have been very successful in defeating ISIS media cells. In Syria, we've targeted known ISIS media members, their infrastructure and their capabilities,” said the statement, adding that the coalition effort had degraded Islamic State's ability to spread its message and recruit future terrorists.

Multimedia releases that were once the group's calling card have been particularly hard hit, Raisman said. He listed defunct Islamic State publications including Dabiq and Constantinople; English and Turkish language magazines with unique content.

The last issue of Roumiyeh, its flagship magazine, was published in September 2017; only Al Nabaa', its weekly Arabic newspaper, remains. Multiple video releases every week are gone too.

Though Islamic State once enjoyed free rein on Twitter, Facebook, YouTube and Telegram (the latter remains home to dozens of Islamic State channels), social media giants are now much faster at policing and removing extremist content.

With its official arms under siege, Islamic State has turned to its sympathizers, Hughes said.

Because they are not on the radar of authorities, sympathizers can create their own distribution networks. And some have the capacity to produce their own content. (One example was a picture of Santa Claus standing by box of dynamite in Times Square. The poster, which stayed in the headlines for weeks in November, was made by a supporter).

Hughes cites the case of Ashraf Safoo, a naturalized Iraqi American who was the target of an FBI investigation and the focus of a subsequent criminal complaint in 2018.

Though he was not an Islamic State member, Safoo helped set up the Khattab Media Foundation, a group of 33 supporters who would republish extremist propaganda as well as produce its own in coordination with the Islamic State media officials.

According to court documents, the foundation's members would engage in “raids” on social media, using “banks” of freshly created or hacked social media accounts to spread prepackaged groups of tweets. They also took operational security measures, using aliasing software such as Tor and virtual private networks to mask their location, or restricting their Islamic State-related work to prepaid phones that were harder to track.

Its videos, graphics-laden and slickly edited, garnered a can't-look-away fascination in their depiction of anything from the Utopian scenes of life across the 35 wilayas, or provinces, under the group's control to the gruesome ways it killed its many enemies.

From the moment Islamic State began to lose ground, its messaging shifted to the idea that it didn't need real estate to exist, said Aymenn Jawad Tamimi, a researcher of Islamic State texts with the Middle East Forum think tank.

“Congratulations to you, O Pentagon, for this victory … for the piles of rock,” said Islamic State's then-spokesman Abu Mohammad Adnani in March 2015 after the group lost the Kurdish Syrian city of Kobani.

The group has since even further streamlined its operation, said Tamimi, relying increasingly on branches in Somalia and elsewhere in East Africa.

“Rather than Islamic State being this central organ in Iraq and Syria with branches all over the world, it's a diffuse global jihadist insurgency,” Tamimi said.

The group's rhetoric has also shifted away from encouraging Muslims to bring their families to the caliphate, a hugely successful campaign; Islamic State territory once ranked as home to the highest number of foreign fighters in the world, according to the International Center. Its message now is “you should come, but if you can't because of obstacles, stay home and carry out attacks there, because what you do there has more impact than here,” Raisman said.

There is also a focus on attacks on defectors and those leaving Islamic State, Hughes said, with targeted assassinations playing a larger role in messaging.

“It's not about distributing candy in Raqqah anymore. It's about a show of strength,” Hughes said.

Meanwhile, reports have emerged of Islamic State establishing a presence on the dark web as well as less mainstream social media services, expanding its use of ZeroNet, which allows peer-to-peer hosting of sites to circumvent censorship.

The result, Raisman said, is that “you have to seek them, they can no longer easily seek you.”

That's not very hard, Hughes said, noting that it's often just a matter of searching in a language other than English to find extremist materials.

But with the physical caliphate on the verge of being snuffed out, experts believe it's unlikely that governments will engage in the intense efforts needed to turn people away from the group's ideology.

“How can one defeat a terrorist group with the breadth of the Islamic State or Al Qaeda?” Raisman said.

Whether it's in the areas that once comprised the caliphate or the media landscape, he said, “it's the ideology that must be defeated in tandem with the fighters.”

SEE ALSO: ISIS Commander Tries Shooting Combat Propaganda. Then His 'Brothers' Leave Him For Dead After He Gets Shot