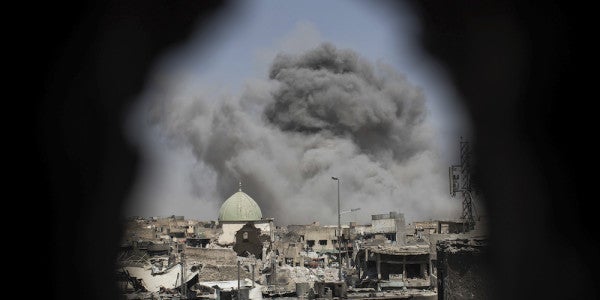 Fort Hood commander Lt. Gen. Paul E. Funk II, who is leading the anti-ISIS campaign in the Middle East, said Dec. 18 that even as the Islamic State is pushed from its territories in Iraq and Afghanistan, stubborn challenges will exist in the region, perhaps for years.

Funk pointed to a single neighborhood in Raqqa, Syria, the terror group’s de facto capital, where coalition forces have found more than 8,000 improvised explosive devices planted by fleeing ISIS soldiers. Clearing the devices and making the neighborhood livable is but one example of the lengthy reconstruction that awaits in wide swaths of the region.

Funk said Iraqi and coalition forces have effectively pushed ISIS out of Iraq and all but a few pockets of influence in Syria. “We’ve got a victory here,” Funk told reporters via teleconference from Iraq, adding that “We still have some hard fighting to do in Syria.”

Funk and about 240 members of Fort Hood’s III Corps command group took the reins of Operation Inherent Resolve in September. Since then, about a million more Iraqis and Syrians have been liberated from ISIS rule, he said.

Since the beginning of 2017, coalition forces have driven the Islamic State out of Mosul in northern Iraq, and more recently from the group’s headquarters in Raqqa.

Funk defended the accuracy of U.S. airstrikes, which have been criticized for their toll on civilians, but also credited with pushing ISIS out of territories it seized three years ago.

Last month, the New York Times magazine published an investigation that found airstrikes connected to U.S. military’s anti-ISIS efforts were considerably less precise than the coalition had claimed over the past three years. The magazine, which visited nearly 150 airstrike sites in northern Iraq, said it found that one in five strikes resulted in civilian deaths, a rate 31 times higher than the one acknowledged by the coalition of one in about 157.

“When the enemy uses civilians as shields it’s incredibly hard not to have civilian casualties,” Funk said. “Our procedures are sound.”

Funk said that in addition to the problem of ISIS IEDs in the newly reclaimed territory, a prime challenge in the coming months will be finding jobs for fighting-age men as reconstruction efforts begin. It will be “a big problem if we don’t find them employment,” Funk said.

“We are winning here, but we have to act now,” he said. “We have to get the international community to help the Iraqis.”

In all, about 17,000 Fort Hood troops will be deployed in places like South Korea, Europe, Africa and the Middle East over the Christmas holiday.