ISIS Is Gearing Up For A Comeback In The Philippines

The battle in Marawi City may have ended, but the war is not over. This became evident on Dec. 15... 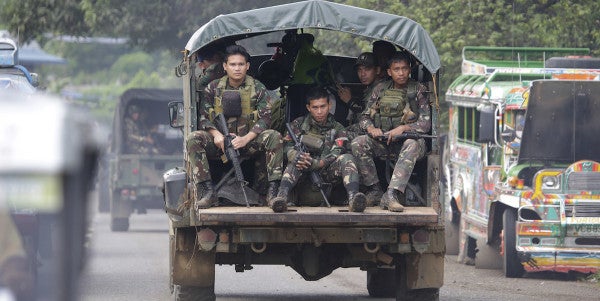 The battle in Marawi City may have ended, but the war is not over.

This became evident on Dec. 15 after the Armed Forces of the Philippines said that ISIS-inspired groups in Mindanao were ramping up their recruitment drive to beef up their fighters for terror attacks.

During the “Bangon Marawi” news briefing in Malacañang, military pokesman Col. Edgard Arevalo said the military was monitoring the “intensified” recruitment activities of the remnants of the group once headed by terrorist leaders Isnilon Hapilon and brothers Abdullah and Omarkhayam Maute.

Related: ISIS Just Suffered A Major Defeat In The Philippines »

“The recruitment we are monitoring is from remnants of Maute/ISIS (Islamic State of Iraq and Syria) group. We monitored in the municipalities around Marawi, the immediate vicinity of Marawi,” Arevalo told reporters.

Arevalo cited in particular the group led by a certain Abu Turaife, who has been tagged by the military as Hapilon’s potential successor as IS emir in Southeast Asia.

While Turaife’s group has only 22 members, it was still deemed a “big threat” because of its capability to endanger the lives of the people in Mindanao, Arevalo said.

“We cannot underestimate them because they are only few. But maybe the 22 is what we could mention with certainty or report with certainty. But their ability to recruit, their mobility, the weapons that they have, and their capability to conduct terrorist activity cannot be measured by their number,” Arevalo said.

“They don’t need to be a large group. But then, the point we’re saying is, they are capable, among other reasons that they were cited for the extension of martial law,” he added. “They are among those considered as a big threat because the group of Abu Turaife has leaning towards extremism.”

According to Arevalo, these extremist groups were seeking to recruit their relatives and “vulnerable” children.

“And that is what we are intensely working on to prevent them from continuing to recruit these vulnerable sectors of our society,” he said.

To counter the terrorists’ recruitment efforts, the government has launched several programs for the youth, Arevalo said.

“We are countering violent extremism dialogues with the youth. We also have youth leader summit. And just recently, we concluded the education tour of Muslim youth in Kuala Lumpur, Malaysia. Our objective is to give our fellow countrymen, especially the youth, a chance to realize what is extremism how recruitment is being done by these extremists,” he said.

“These are among the ways we see to promote unity and have a fruitful and mutual co-existence,” the military spokesman added.

Mindanao has been under military rule since May 23, when fighting broke out between the Maute terror group and government forces in Marawi City in Lanao del Sur.

Under the Constitution, martial law may be declared for 60 days if there is an actual rebellion or invasion and when public safety requires it.

Upon the recommendation of President Rodrigo Duterte before the expiration of his martial law proclamation on July 22, Congress extended it to December 31, 2017.

Congress, in joint session on December 13, granted the President’s request for a one-year extension of martial law in Mindanao to allow the police and military to eradicate all terrorist groups and armed lawless elements in Mindanao.

With the additional extension, martial law will be in effect in Mindanao from January 1 to December 31, 2018.