‘I Didn’t Do [It] For ISIS’: Failed Port Authority Suicide Bomber Found Guilty

After being found guilty on all counts for a failed suicide bombing in a passageway to the Port Authority, a... 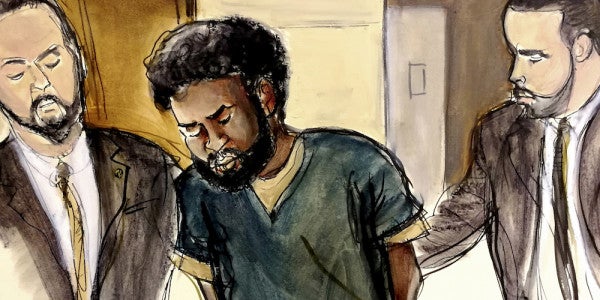 After being found guilty on all counts for a failed suicide bombing in a passageway to the Port Authority, a Bangladeshi immigrant declared the jury had gotten one thing wrong: He was no ISIS sympathizer.

“I didn’t do (it) for ISIS group,” Akayed Ullah said in Manhattan Federal Court after the jury had been excused.

“I was angry with Donald Trump because he said he will bomb the Middle East and protect his nation.”

The remarks were unexpected. Ullah showed no emotion as the jury found him guilty on all six counts for the attack on Dec. 11 of last year that miraculously resulted in no deaths. The jury deliberated for roughly six hours over two days.

Judge Richard Sullivan repeatedly advised Ullah, 28, that he should speak with his lawyers rather than make statements in court.

Ullah faces a maximum sentence of life in prison.

His remarks to the judge echo those made by his defense team during the week-long trial.

Attorneys for Ullah, an electrician who lived in Brooklyn, argued that he was outraged by U.S. foreign policy in the Middle East and suicidal — but not a follower of ISIS.

Prosecutors charged that Ullah was a lone wolf influenced by ISIS propaganda that encourages followers to launch attacks in Europe and the U.S. if they are unable to join the fight in Iraq and Syria.

Ullah had targeted the underground passageway to the bustling bus terminal to inflict maximum damage, prosecutors said. They also noted that Ullah had viewed terrorist propaganda online and made damning posts on social media before the attack, including “Oh America die in your rage” and “Oh Trump, you fail to protect your nation.”