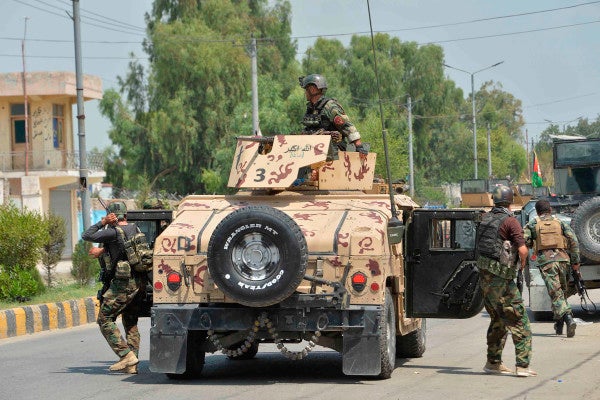 At least 29 people were killed in a 20-hour siege at a prison in eastern Afghanistan when ISIS militants attempted to free hundreds of its members from the compound.

At least 1,000 inmates were recaptured trying to flee during the siege, while 300 are still missing, Attaullah Khogiani, a spokesman for Nangarhar province, said by phone. The toll from the attack includes civilians, inmates and Afghan forces, Khogiani said. Fifty others were wounded, with some in critical condition.

The siege “highlights the top security challenges” for the war-torn country at a time when U.S. and NATO forces are withdrawing following a U.S.-engineered peace deal with Taliban leaders signed on Feb. 29, said Jawid Kohistani, a security analyst and former military official.

“This is one of the group’s major and rare attacks on a government facility,” Kohistani said, noting they mostly targeted public areas such as Shia mosques or gatherings. “Major attacks by the Islamic State in recent months show they would become the top insurgent group to destabilize the country and the region, replacing the Taliban. The war may never end.”

In the first half of the year, 1,282 civilians were killed and 2,176 others were wounded in terrorist-related violence, in which 58% of the casualties were attributed to Taliban and Islamic State, according to a report by the United Nations.

The Taliban, which controls or contests more than half the country, denied responsibility for the attack in an emailed statement. The group declared a three-day cease-fire starting Friday during the Eid al-Adha festival.

The raid comes a day after a senior Islamic State member was killed by Afghan forces in Nangarhar province, which borders Pakistan, and where the group is headquartered, and three days after Afghan President Ashraf Ghani announced the release of an additional 500 Taliban inmates to show good will for peace talks.

The government has so far released 4,600 Taliban inmates out of total 5,000 in a prisoner swap with 1,000 Afghan forces. The Taliban and the Afghan government are expected to hold peace talks soon in an effort to end the 19-year war and negotiate on a possible coalition government.

There are as many as 2,200 Islamic State militants operating in the country after being severely curtailed by both the government and Taliban in Nuristan and Kunar province in recent years, a separate United Nations report found.