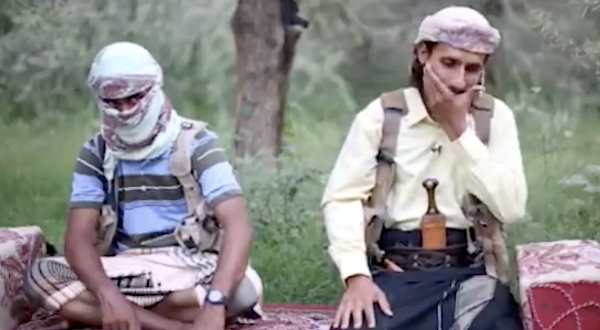 A new video of ISIS recruits trying to pledge their allegiance to the caliphate shows a recruit fluffing his lines and being interrupted by screeching bird calls.

A video of a recruits in Yemen, unearthed by Dr Elisabeth Kendall, a senior research fellow at Oxford University's Pembroke College, shows a bearded youth coming struggling to get through his vows.

The footage was recorded in 2017, when ISIS still held territory in Iraq and Syria, and was attracting recruits from further afield.

Kendall told Business Insider the clip was released this week by Hidaya Media, a broadcaster associated with al-Qaeda's operations around the Red Sea.

ISIS and al-Qaeda are rival jihadist organizations and have been known to insult and belittle each other.

Heroic bird relentlessly drowns out ISIS-Y's attempt to renew allegiance to the caliph. Leader's feeble memory adds to the woes… These bodged "takes" didn't make it into the official video of this solemn event, released end July pic.twitter.com/8w7sp79LcL

Although ISIS has been deprived of its former territory in Syria and Iraq, the organization continues. Both ISIS and al-Qaeda are currently fighting over territory in Yemen.

In the video the insurgent, identified by The Independent as Abu Muhammad al-Adeni, trips over his lines, prompting a fellow recruit to say: “Stay calm, keep cool”.

On two occasions his speech is cut short by loud, intrusive bird calls. The man has a Janbiya knife tucked into his belt.

A still showing ISIS recruits reaffirming their vows in a video first shared by the terror cell in 2017. (Twitter/Elisabeth Kendall)

The footage may have been found by al-Qaeda operatives when they took over an ISIS camp in northwestern al-Bayda, Yemen, earlier this summer, Kendall told Business Insider.

Footage from a different part of the shoot later made it into an actual ISIS propaganda video, released in September 2017. It shows a series of young recruits gathering together, celebrating, affirming their vows to the caliphate, and eating.