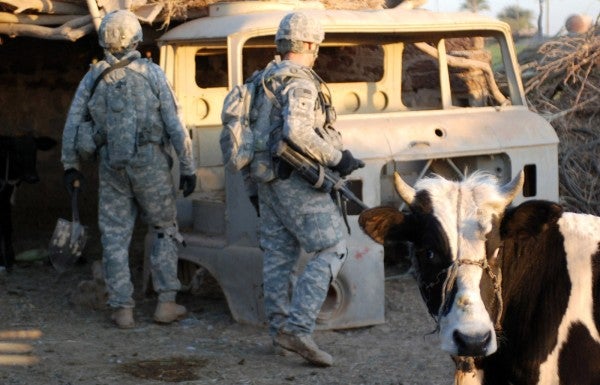 At least two cows were seen with explosive vests in the southeastern Iraqi village of Al Islah, where they were then remotely detonated when they were close to homes, a provincial police commander said, according to The Times. The cows, which The Times said could cost more than $1,200 each, were killed and homes were damaged. No humans were believed to be harmed in the incident.

Vehicle-borne improvised explosive devices have been widely used by terrorist organizations for suicide missions, as have animals. In 2013, a suicide bomber with a donkey killed three NATO troops in Afghanistan. The Taliban claimed responsibility for the attack.

The Times suggested the recent attack was a sign the Islamic State wanted to preserve the lives of its members who might otherwise die in a suicide bombing.

Wednesday's report came amid a scathing assessment from the Defense Department's inspector general warning that the Islamic State, also known as ISIS, could be resurfacing in light of the US's decision to withdraw its troops from Syria.

“ISIS remains a threat in Iraq and Syria,” the report's lead inspector general, Glenn Fine, wrote. “This quarter, ISIS continued its transition from a territory — holding force to an insurgency in Syria, and it intensified its insurgency in Iraq.”

Though estimates vary, about 14,000 to 18,000 ISIS members are still believed to be operating in Iraq and Syria, according to public data cited in the inspector general's report. The figures include up to 3,000 foreigners.