When Iraqi forces and their partners from the 2nd Brigade Combat Team, 82nd Airborne Division arrived in western Mosul earlier... 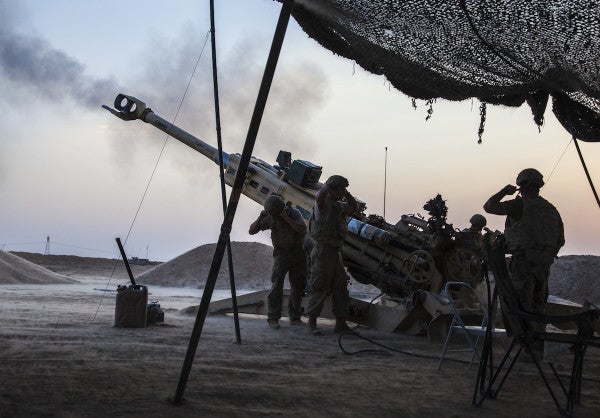 When Iraqi forces and their partners from the 2nd Brigade Combat Team, 82nd Airborne Division arrived in western Mosul earlier this year, they found an enemy that had been preparing for them.

The Islamic State was clinging to Iraq’s second-largest city, said Col. J. Patrick Work, the commander of the 2nd Brigade. They had prepared their defenses for almost two years.

“It was a defense that any army would have a hard time penetrating,” he said.

Obstacles were placed around the city, meant to stop or slow the advancing Iraqi troops. There was an extensive network of car bombs and massive amounts of mortar and artillery firepower – enough that ISIS could fire at least 200 rounds a day. At times, ISIS fighters used low-grade chemical weapons, attacking military and civilian targets indiscriminately.

Work, speaking less than a month after the 2nd Brigade returned from the Middle East, said that ISIS was no easy target, even as their territory in Mosul shrank.

Work said the Iraqi soldiers and their American advisers adapted with them.

When ISIS launched small drones to drop grenades on Iraqi positions, the Iraqis adopted better camouflage and began watching for the machines.

Eventually, Iraqi and U.S. troops began knocking down the drones before they could do any damage, then began sending the drones – and their payloads – back to ISIS fighters or using them to trace the locations of ISIS control centers.

“Iraqi security forces became very adept at returning drones so we could exploit it,” Work said. “We would strike control centers with their own weapons.”

Even ISIS’s barrage of mortar and artillery fire began to work against them. As ISIS fighters targeted military and civilian targets, they constantly moved around the battlefield.

Coalition and Iraqi troops were able to track patterns in how ISIS fighters moved, allowing coalition forces to strike with precision fires or allowing Iraqi forces to overrun the attackers.

As ISIS shifted techniques, Work said the coalition and Iraqi partners had to adapt quickly.

“There’s a constant interplay of thinking,” he said. “The enemy can never out-fight us. He can only out-think us if we allow him.”

“We’ve dominated them together,” he said.

On Tuesday, Work looked back on the deployment that involved 2,100 paratroopers from his brigade – roughly half the unit – and the advances made in the fight against ISIS.

The 2nd Brigade deployed in late December and began advising and assisting Iraqi partners in January, participating in the liberation of Mosul and Tal Afar in Ninewah province before returning to Fort Bragg in September.

“Our sole purpose was to help the Government of Iraq’s security forces dominate our common enemy, the so-called Islamic State of Iraq and Syria,” Work said. “Our partner’s success was our success. We’re extraordinarily proud of our partners for having established a security framework that has allowed a quarter million Iraqi citizens to return to their homes in Mosul.”

Mosul was more than just a city to ISIS, Work said. It was a lynchpin of the group’s claim to be its own nation, torn from parts of Iraq and Syria in 2014.

But that so-called caliphate is in shambles. Since losing Mosul, the cities of Tal Afar, Sharqat, and Hawija have been liberated in short order.

Iraqi forces and coalition partners in both Iraq and Syria are ripping ISIS apart, he said. But what’s more devastating to the idea of ISIS is that east Mosul, liberated earlier this year, is thriving.

“East Mosul has a new normalcy to it that offends ISIS and there’s nothing ISIS can do about it,” Work said.

Backed by the international community, he said Iraq was pulling itself back together.

“It was an extraordinary privilege to serve with the mighty international coalition aligned against ISIS, a brutal enemy not just for the region, but for our world community,” Work said. “Our highly trained, disciplined, and fit team of advisers, logisticians, and intelligence and fires specialists provided our best military advice to senior Iraqi generals. However, once they made their decisions, we assisted them with their operations.”

Work said the fight is and has always been the Iraqis'. They assume most of the risk in the fight against ISIS.

“We helped them fight ISIS, but they closed on ISIS in the cities, they took the ground from ISIS and they rescued their own people from ISIS’s cruelty,” he said. “Our experience was defined by Iraqis liberating Iraqis.”

Work said there are clear signs that ISIS’s days are numbered.

While the battle for Mosul took months, more recent battles against the Islamic State have taken days.

Mosul, which at one time was the “crown jewel of ISIS’s so-called caliphate” took a massive amount of resources and effort to defend, Work said. And during the latter part of the battle, ISIS was simultaneously defending its capital of Raqqa.

The loss of Mosul was catastrophic for ISIS, Work said. And it exhausted their army.

“They’re in tatters,” he said. “It is clearly circling the drain.”

With coalition fighters gaining momentum in Raqqa, Work said it’s safe to assume that ISIS will never be the same again.

“This is a monstrous setback not just for this want-to-be state, but for this idea,” he said.

Work said ISIS was founded on an intoxicating narrative that promised martyrdom for its followers.

In Mosul, women served as suicide bombers and the elderly and crippled fought to the death.

But now, many ISIS fighters are fleeing the battlefield altogether. Others are surrendering in mass to Iraqi forces.

More than its physical army or its so-called caliphate, the idea of ISIS is now under intense fire from within, Work said.

“I do believe these defections, these surrenders… Those who just run away… Those are all signs that the idea is dying from within,” he said.

The colonel said he was proud of the role his soldiers played in freeing Iraqis from ISIS control and confident of the efforts of those U.S. troops who replaced them in Iraq – part of the 10th Mountain Division.

“Still, a great deal of deadly work remains,” Work said. “The government of Iraq will continue to pursue ISIS, and the coalition will continue to change directions as quickly – and as often – as necessary to enable the Iraqis’ operations against our common enemy… In Iraq, ISIS is in its death throes, and our coalition is looking for indicators that ISIS may be able to reconstitute its fighting power…if they see these signals, we know they’ll attack and help the Iraqis attack.”