Harrowing Audio Shows Moment When An Israeli F-15’s Canopy Comes Off At 30,000 Feet 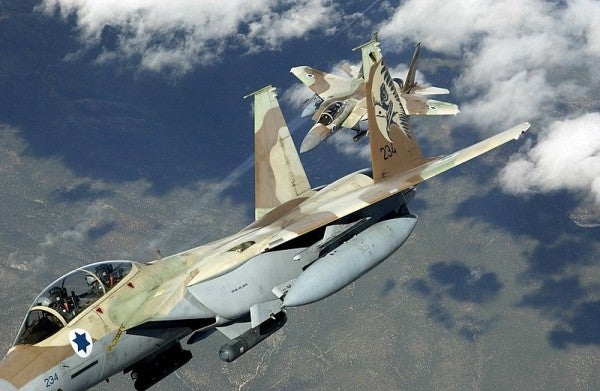 An Israeli Air Force pilot was able to make an emergency landing of his F-15 fighter last week after its canopy suddenly came off at 30,000 feet, and newly-released audio shows how the harrowing ordeal sounded in the cockpit, according to Haaretz.

The audio of the incident starts off normal, with a voice asking about what altitude the pilot will be maintaining. And then… all hell breaks loose once the canopy comes off, amid screaming and outside wind. As Haaretz noted, the pilot and navigator were also dealing with an air temperature of around minus 50 degrees Fahrenheit.

“The pilot, Captain Y., and the navigator, Lieutenant R., conducted the event in complex conditions where there was a real risk to the plane and crew,” the Israeli Defense Forces said in a statement to The Jerusalem Post. “The plane's crew was in full control throughout the incident, acted with level-headedness, professionalism and great skill in handling the rare malfunction, and landed the plane safely at the Nevatim Air Base.”

About a second after the canopy releases and the pilot Capt. Y gets his bearings, he asks his navigator, “I hear you, do you hear me?”

He adds: “I'm taking it in for a landing at the nearest base without a canopy. Can you hear me?”

After a few tense seconds, the navigator finally responds: “Can you hear me? Yes I can hear you.”

They both tell each other they are doing fine, before the pilot starts talking to the ground about where to land and calmly relays what's happening. And then once he got on the ground, he very likely had to get the ground crew's help with getting his huge brass balls up and out of the cockpit.

Israeli Air Force Commander Maj. Gen. Amikam Norkin has ordered all F-15 training flights ceased until an investigation is completed, according to JPost.

SEE ALSO: I Watched China's Version Of Rambo So You Don't Have To