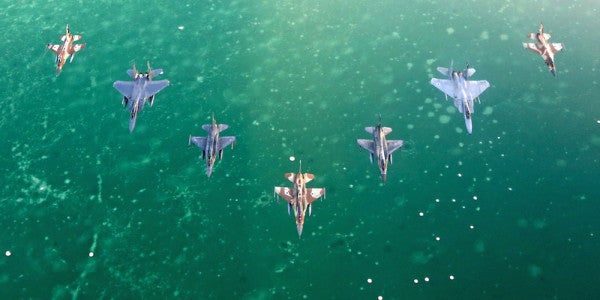 On Sunday, Syria got rocked by a missile attack that appeared to ignite a munitions depot hard enough to register as a 2.6 magnitude earthquake and is believed to have killed dozens of Iranians. Experts say the strike was most likely carried out by Israel.

Though Tehran has denied that Iranians died in the strike, a more aggressive posture toward Iran by Israel could bring about a major clash that experts say might lead to the biggest war the Middle East has ever seen.

The perpetrator of Sunday's attack hasn't been confirmed. Israel rarely takes credit for strikes within Syria, though it maintains that it will strike at any Iranian activity there that it deems a threat.

With an estimated 20,000 to 70,000 Shiite Iranian-aligned fighters and tens of thousands of rockets in Syria, that's a lot of activity for Israel to monitor.

Jonathan Schanzer, an expert on Iran and Syria at the Foundation for Defense of Democracies, says Israel is picking up the pace of strikes and moves against Iran — and staring down the barrel of a massive confrontation.

“For some time, it really did look like the Israelis were holding back,” Schanzer told Business Insider. “They seemed reticent to engage. They didn't want to expose themselves in the skies over Syria.”

But after an air battle in February among Israeli, Syrian, and Iranian forces — in which Israel said it downed an Iranian drone and much of Syria's air defenses but lost an F-16 fighter jet— Israel appears to be going much harder.

Israeli forces “appear to have broken a seal of sorts,” Schanzer said, adding that Israel may see a “window” as Syria's air defenses are vulnerable.

Both Iranian and Israeli sources cited in recent news reports have predicted retaliation to the strike on Sunday.

But before any such answer could be made, Israel dropped what it characterized as a massive cache of dirt on Iran.

Another video of the huge explosion at 46 Brigade arms depot in #Hama, rumours of Israeli Strikes, could be sabotage as well. pic.twitter.com/ZnmYUTq4W7

Netanyahu said at a press conference on Monday that Israeli intelligence had about 100,000 documents, videos, and photographs showing that Iran had lied about its nuclear ambitions, and he accused it of cheating on the 2015 nuclear deal with world powers.

Schanzer said: “Spies steal documents all the time, but this was a huge cache. And usually, spy agencies keep it quiet after the intelligence is lifted. Not so with the Israelis — they are broadcasting this, making it as much a psychological operation as a revelation about Iran's nuclear mendacity.”

Secretary of State Mike Pompeo said on Sunday that Trump would withdraw from the 2015 deal “if we can't fix it” and assured Netanyahu that the U.S. was “deeply concerned about Iran's dangerous escalation of threats to Israel and the region and Iran's ambition to dominate the Middle East.”

“The United States is with Israel in this fight, and we strongly support Israel's sovereign right to defend itself,” Pompeo added.

Iran's ability to retaliate against Israel is limited.

Iran's main leverage over Israel is its influence with Hamas, a Palestinian group active in the already boiling Gaza Strip on Israel's border, and its nearby fighters and rocket stockpiles.

“There are things that Iran can do very quickly to make things miserable for the Israelis,” Schanzer said.

With Israel on the sidelines of the civil war in Syria, where over 70 countries have bombed or contributed to bombing efforts, the feud heating up between Jerusalem and Tehran could erupt into a fight that could rock the Middle East.