Israel's military said on Tuesday that it fired two U.S.-made Patriot missiles at and “intercepted” a Syrian Sukhoi fighter that... 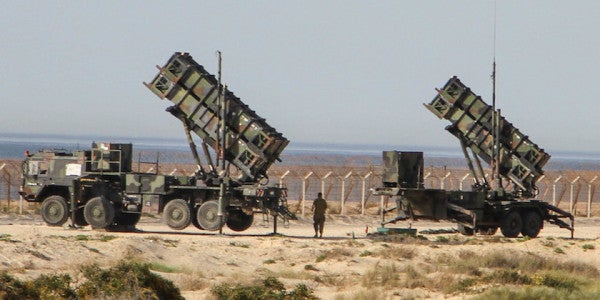 Israel's military said on Tuesday that it fired two U.S.-made Patriot missiles at and “intercepted” a Syrian Sukhoi fighter that entered its airspace.

The plane crashed in Syria near its border zone with Israel, and the fate of the pilot remains unknown, the New York Times reported. The Syrian jet is thought to be a Russian made Su-24 or Su-22.

For weeks, rockets fired from Syria and elsewhere outside Israel have peppered the country and activated its missile defenses on multiple occasions.

Israel and Syria have a border dispute in the Golan Heights and have squared off in aerial combat before, with Israel notably destroying much of Syria's anti-air batteries and losing one of its F-16s.

The Israeli Defence Forces said the Russian-made Syrian jet “infiltrated about 1 mile into Israeli airspace” before being intercepted.

“Since this morning, there has been an increase in the internal fighting in Syria and the Syrian Air Force's activity,” the IDF added. “The IDF is in high alert and will continue to operate against the violation of the 1974 Separation of Forces Agreement,” the UN resolution that ended the Yom Kippur War between Israel and Syria.