A federal judge called security at one of the U.S. Navy's bases in Key West lax at best and "foolish," days after two Chinese nationals entered a military property by simply ignoring the guard at the entrance and driving through 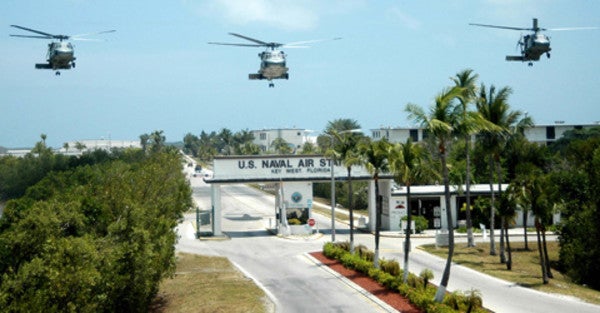 A federal judge called security at one of the U.S. Navy's bases in Key West lax at best and “foolish,” days after two Chinese nationals entered a military property by simply ignoring the guard at the entrance and driving through.

“It boggles the mind,” said U.S. District Court Magistrate Judge Lurana Snow, on the bench in Key West on Friday.

But, Snow added, the case at hand remains a troubling one.

Yuhao Wang and Jielun Zhang, who are full-time students in master's degree programs at the University of Michigan in Ann Arbor, are accused in a complaint of defying the guard at the gate at the entrance to Sigsbee Park Annex the morning of Jan. 4 so they could take illegal photos of sensitive military assets.

Snow on Friday ordered Wang and Zhang detained until their cases are resolved, agreeing with prosecutors that they are a flight risk.

Despite her shock at how easily the pair got onto Sigsbee and roamed around for nearly a half-hour, Snow says she is taking the incident seriously.

“It's not my belief either of the defendants are undercover agents or master spies,” Snow said.

But, she said she thinks their purpose on the base that morning was to “obtain information that's valuable to someone other than these two defendants.”

FBI agents said it took 30 minutes to find the two 24-year-olds, who face misdemeanor charges of trespassing in order to photograph military installations. Neither has been indicted.

A Navy spokeswoman Thursday said the search was closer to 15 minutes.

The students' defense is that they were tourists on vacation.

“Things aren't always what they seem,” said federal public defender Juan Michelen, who represents Wang. “I can see why this can be a salacious case.”

“They could have videoed everything and sent it to the world by the time security caught up with them,” Snow said. “I'm horrified.”

Sigsbee Park is one of seven annexes the Navy maintains throughout Key West and the Lower Keys, bases that include nearly 30 miles of shoreline.

Sigsbee, which is on an island called Dredgers Key, is largely a residential neighborhood for about 500 families, both military and civilian.

The school district has a public charter school on base and there is a restaurant and bar, car wash, commissary, baseball fields and a waterfront RV park.

That park is where Wang and Zhang reportedly took their photos, aiming cellphones and a Nikon camera at Fleming Key, a nearby island across the water where the Navy keeps “small arms” in weapons bunkers, said Naval Air Station Key West spokeswoman Trice Denny.

Only one road connects Sigsbee to Key West proper, off North Roosevelt at Kennedy Drive in the New Town area of the city.

The entrance has a guard station and a parking arm that is usually up during the day, some residents said.

“We have had problems with trespassing,” said Denny. “We stay vigilant. It's the 27 miles of shoreline that's the problem.”

The same day Wang and Zhang drove onto the base, Denny said two men came ashore after docking their boat behind a home on Sigsbee. Police were called and escorted them off the base.

“They said they were lost,” Denny said. “We've had those things happen in the past. We've also had Cubans land on the base as well. That's another form of trespassing.”

Denny said the Navy trains for trespassing incidents, just as it does for active shooters.

“Hopefully, something will change,” Snow said. “I'm not fussing at the Navy because this is a new phenomenon but I truly hope they will do something.”

That phenomenon is a growing number of cases in which Chinese civilians are recruited by Beijing to collect sensitive military technology and reports, according to the online business journal Quartz.

Quartz refers to a 2018 podcast interview with William Evanina, head of the National Counterintelligence and Security Center since 2014.

“China is number one,” Evanina said in the chat with former deputy CIA director Michael Morell. “Existentially, long term, they're the largest threat to our national security, bar none — it's not even close.”

Evanina said, “Those out-of-embassy jobs where they send over engineers, businessmen, students to do the same type of collection, recruitment, co-opting of information … at mass scale.”

In a similar case, another Chinese student, Lyuyou Liao, was arrested the day after Christmas on a charge of entering the Truman Annex at the Naval Air Station for the purpose of photographing defense installations.

He was stopped by federal agents who found photos on his cellphone of military facilities.

A fourth Chinese national arrested at the Naval Air Station in Key West was Zhao Qianli in September of 2018. Qianli claimed to be a music student from China and got caught by the Key West police for trespassing onto the high-security Naval Air Station. He later told federal authorities that he was lost and did not realize it was a military base.

Investigators found photos and videos on Qianli's cellphone as well as on his digital camera that he had taken of government buildings and a Defense Department antenna field on the military base.

Qianli, 20, pleaded guilty last February to one count of photographing defense installations at the Key West military facility and was sentenced to one year in prison by U.S. District Judge K. Michael Moore.

The judge gave him the maximum sentence, which was higher than the sentencing guidelines of between zero and six months. The U.S. Attorney's Office sought nine months in prison.