The Italian Army has started ferrying dozens of coffins from the northern city of Bergamo, the worst-hit city in Italy's coronavirus crisis, to remote cremation sites because local morgues can't cope with the number of new deaths 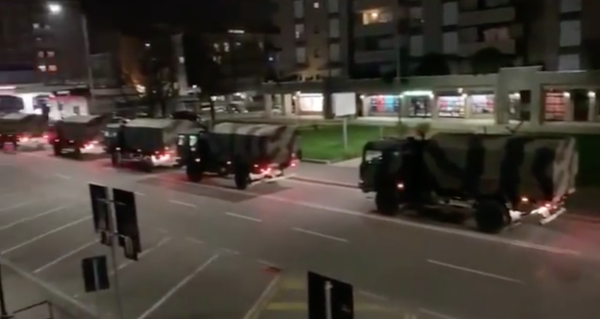 The Italian Army has started ferrying dozens of coffins from the northern city of Bergamo, the worst-hit city in Italy's coronavirus crisis, to remote cremation sites because local morgues can't cope with the number of new deaths.

A convoy of at least 10 military trucks was filmed passing through the city Wednesday night.

They were transporting 61 bodies to cremation sites in 12 Italian towns, including Modena and Parma, the national newspaper Corriere Della Sera reported.

Bergamo is Italy's worst-hit city, with 93 deaths and 4,305 confirmed infections as of Wednesday, and its public services are in crisis.

Mayor Giorgio Gori wrote to neighboring towns seeking help with cremation, saying the ashes from the cremated bodies would be brought back to Bergamo, the local L'Ecio Di Bergamo reported.

The town's crematorium, which has been operating 24/7, can cremate only 25 people a day, L'Ecio Di Bergamo added.

Funeral services in the town have also been overwhelmed, as Business Insider's Mia Jankowicz reported Tuesday.

There is a long waiting list for burials, and coffins were stacking up at two hospital morgues and a cemetery morgue.

A video posted by the Italian newspaper Il Messaggero on Sunday showed coffins lined up in a Bergamo church.

Gori, Bergamo's mayor, said Wednesday that the number of coronavirus deaths in the town might be far higher than reported.

“There are significant numbers of people who have died but whose death hasn't been attributed to the coronavirus because they died at home or in a nursing home and so they weren't swabbed,” he said, according to Reuters.

Mirco Nacoti, an anesthesiologist and intensive-care specialist, estimated to The Wall Street Journal on Tuesday that 60% or more of Bergamo's population already had the coronavirus.

Italy has recorded the most coronavirus deaths and infections outside China, where the disease broke out late last year. Nearly 3,000 people in the country have died, and more than 35,000 have been infected as of Thursday morning.

The Italian journalist David Carretta on Monday tweeted a video of himself leafing through the obituary pages of the L'Ecio Di Bergamo newspaper. The obituary section, which was 1 1/2 pages in February, spanned 10 pages on Friday.

Italy has the largest aging population in Europe. The elderly and those with preexisting health conditions are most at risk of death from COVID-19, the disease caused by the coronavirus.