‘I’ve Never Loved Anything So Selflessly’: A Parris Island Marine Remembers A Bulldog

The rain stopped and the clouds parted minutes before the funeral, and the sun filtered through an oak, casting splotchy... 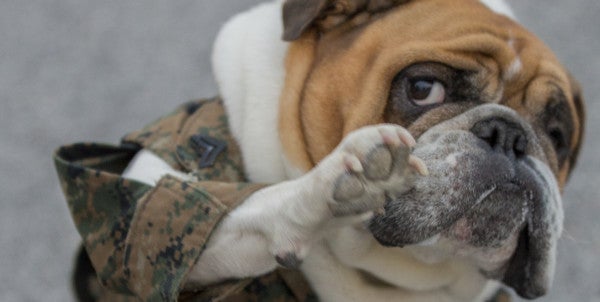 The rain stopped and the clouds parted minutes before the funeral, and the sun filtered through an oak, casting splotchy shadows around the podium where a young Marine shared stories of her friend before he was laid to rest.

Nearby, on a table covered with a black cloth and a white runner, was a vase of white flowers and a picture of a bulldog.

“I didn’t want him, and he didn’t listen to me or like me … very much,” Lance Cpl. Alicia Stull said, standing behind the podium. “I had to throw food as snacks … in order for him to walk anywhere. He was smelly, and so was the room I got moved into — smelled just like him.”

Some of the 70-plus folks in attendance at Friday afternoon’s service for Cpl. Legend — Marine Corps Recruit Depot Parris Island’s 20th mascot, from November 2011 until his death Sept. 17 — chuckled as Stull told how she’d come to be his handler in August 2016.

“I couldn’t bear the smell of that guy, so I gave him a bath,” she continued. “I probably spent about $200 on a new bed and toys and bowls, just because we became roomies.”

There were other dogs at the service, including Jazzy — like Legend, a bulldog — who traveled from Pensacola, Fla., with Monica Acosta and retired Marine Master Sgt. Steven Daly.

They’d heard about Legend’s funeral and decided to drive up, the first stop on their vacation that would take them to Jacksonville, N.C., to reunite with some of Daly’s Marine Corps buddies.

Opha May, the depot’s newest mascot — still in recruit training — was also in attendance.

Stull continued her story, told how she’d take Legend to parties and friends’ houses, how he’d accompany her on food runs to McDonald’s.

Toward the end of his life, after a veterinarian said his time was near, Stull treated him to Chicken McNuggets and ice-cream dates.

Her voice wavered a couple times as she spoke, but the Weymouth, Mass., native kept her bearing.

After the service, she recalled a summer night when Legend ran away.

“I was getting ready to go on a date,” she said. “He gets out, crawls under a fence … and then I have to crawl under the fence, climb over bushes, get chased by, like, 30 chickens, and … I found Legend swimming in the ocean, pretty much. … I was just a mess.”

He had a lot of girlfriends.

“If there’s one thing I’ve learned from the experience with that dog, it was a need for patience,” Stull said from behind the podium. “I’ve never loved anything or anyone so selflessly and effortlessly as I did him.”

Legend had a few handlers over the years, Stull said after the service. When he would get comfortable with one, he’d wind up with another. So, Stull said, his experience was like a lot of Marines’ — just when you get comfortable at a duty station, the Corps moves you somewhere else.

During the service, a colonel remarked how important dogs are to the Corps, how bomb-sniffing animals save lives in Iraq and Afghanistan. A chaplain said a prayer, and said he’d been a bulldog owner for 30 years. A bagpiper played “Amazing Grace” and Taps.

At the end of the service, Marines in camouflage fatigues and civilians with canes and walkers formed a line in front the small square dug into the earth next to the grave of Legend’s predecessor, Sgt. Archibald Hummer. Nearby, two sandbags rested next to the headstone of Cpl. Hashmark, who served the depot from 1995 to 1998. One by one, people approached the sandbags, took a handful of dirt and threw it into Cpl. Legend’s grave.

“Dogs in general, him especially, they’re not here for a long time,” Stull said. “So you kind of have to make their whole life count for them, because they’re only going to be here a fraction of yours.”

She grew up with dogs, she said.

She describes herself as a “homebody” who likes to hang out in her room.

She misses her “roomie.”

But there’s a new task on the horizon: handling Opha May.