Hershel “Woody” Williams, a corporal with the 21st Marine Regiment, earned the Medal of Honor for his actions during the Battle of Iwo Jima, which occurred 75 years ago from Feb. 19 through March 26, 1945 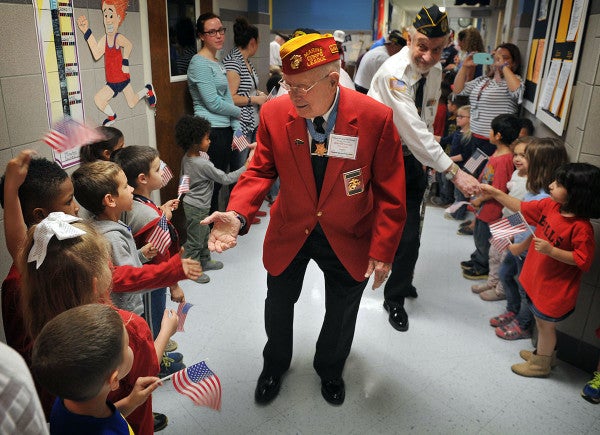 Hershel “Woody” Williams did not even know something called the “Medal of Honor” existed when the Quiet Dell, West Virginia, native learned he would receive the nation's highest and most prestigious personal military decoration.

In fact, at the time, he thought the best part about getting the medal was being sent home sooner than expected after fighting in the Pacific Ocean Theater during World War II.

“In September (1945), after the war was over in August, I was called to my division general's tent for him to tell me that I was being sent back to the states,” said Williams, one of two Medal of Honor recipients from WWII still living .

“The whole division, they were not scheduled to come back to the states yet, but I was sent back to Washington to receive it. And if he used the terms or the words 'Medal of Honor' it didn't mean anything to me because I had never heard of it. I didn't know what he was talking about. … The thing that impressed me and the thing that I remember most of course is – I had been there for two years now – I got to go home. He could have said anything else in the world and I don't think it would have overshadowed that.”

Williams, a corporal with the 21st Marine Regiment, earned the Medal of Honor for his actions during the Battle of Iwo Jima, which occurred 75 years ago from Feb. 19 through March 26, 1945.

On Feb. 23, Williams – armed with a flamethrower and with only four riflemen covering him – destroyed seven Japanese pillboxes, one by one, over a four-hour period. His medal-earning action took place on the same day as the iconic Iwo Jima flag raising, an event captured by Associated Press photographer Joe Rosenthal.

Williams did not witness the flag actually being raised, but did see it later flying high atop Mount Suribachi, providing a “morale booster.”

'Beyond the call of duty'

On Oct. 5, 1945, President Harry S. Truman presented Williams with the Medal of Honor during a group ceremony at the White House in Washington, D.C.

Truman recognized Williams for “conspicuous gallantry and intrepidity at the risk of his life above and beyond the call of duty,” according to his citation.

Williams “daringly went forward alone to attempt the reduction of devastating machine-gun fire from the unyielding positions” and, on one occasion, “mounted a pillbox to insert the nozzle of his flamethrower through the air vent, killing the occupants and silencing the gun; on another he grimly charged enemy riflemen who attempted to stop him with bayonets and destroyed them with a burst of flame from his weapon.”

His citation said: “His unyielding determination and extraordinary heroism in the face of ruthless enemy resistance were directly instrumental in neutralizing one of the most fanatically defended Japanese strong points encountered by his regiment and aided vitally in enabling his company to reach its objective. Cpl. Williams' aggressive fighting spirit and valiant devotion to duty throughout this fiercely contested action sustain and enhance the highest traditions of the U.S. Naval Service.”

Williams was one of 27 members of the military to receive the Medal of Honor for their actions on Iwo Jima, the most for any battle in American history.

All total, 473 United States military personnel earned the Medal of Honor during World War II, according to homeofheroes.com. Although Williams was initially underwhelmed with receiving the medal, getting the honor and serving on Iwo Jima have both significantly impacted his life.

'Honor to those families'

Following his service, which included fighting in the Second Battle of Guam, he has dedicated much of his life to helping fellow veterans and honoring their families.

He spent three decades working as a U.S. Department of Veterans Affairs counselor, which enabled him to assist those who served and their families by getting them the benefits and support they earned. For all of his contributions, the Hershel “Woody” Williams VA Medical Center in Huntington, West Virginia was named in his honor.

“It really was probably the best job that I think anybody could have,” Williams said.

He also started the Hershel “Woody” Williams Medal of Honor Foundation, a nonprofit that has established permanent Gold Star Families Memorial Monuments in communities throughout the country. Williams recently attended the dedication of the 60th memorial. Another 68 are in progress. There are currently monuments in 45 states or territories.

“We're finally getting around to paying tribute and honor to those families that gave more than anyone of us,” Williams said. “They gave one of their own. You can't give more than that.”

Whenever possible, Williams accepts invitations from schools as a way to help provide students with a better understanding of World War II and the military.

“I find they know absolutely nothing about history because we're not teaching it,” he said .”Sometimes a school will put on a special program and they'll teach about World War II or they're going to teach about World War I and they'll have four or five classes about it. But I find that they don't have any concept of the significance of our freedom or the wars that it has taken and the sacrifices that have been made to preserve that precious gift of freedom. It's not there. It's our fault. It's not their's. I don't blame them. I blame our system of education for not teaching patriotism, and love of country and respect of the flag.”

In the near future, Williams plans to visit Iwo Jima for the third – and what he expects will be the final – time, post-World War II. During the trip, he is scheduled to help break ground on a Gold Star monument in Guam.

Also, on March 7, the future USS Hershel “Woody” Williams, a Navy expeditionary transfer dock, will be commissioned in Norfolk, Virginia.

“Oh my, it's just unbelievable,” said Williams, who has resided in Ona, West Virginia, since 1957. “Even after all these years, I'm still trying to comprehend 'why me?' Why was I selected to have this happen, this old country boy.